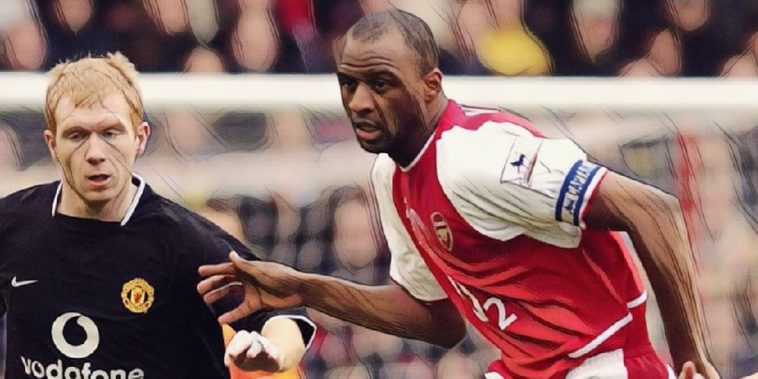 Paul Scholes has named Patrick Vieira as his toughest opponent and has explained why the former Arsenal captain was ‘so awkward’ to play against.

Scholes faced off against Vieira on many huge occasions during a brilliant rivalry between Manchester United and Arsenal throughout the late nineties and early 2000’s, the two sides regularly contesting for the Premier League title and English football’s major honours.

Vieira played a part in three title-winning teams for the Gunners and captained the side to their famed unbeaten campaign under Arsene Wenger in 2003/04, and Scholes has explained just why the Frenchman was so difficult to play against.

“As a player I played against Vieira was brilliant,” Scholes said on the A Goal In One podcast. “The way I played there was never an opponent I had to be fitter than, stronger than, more physical than. I was never that type of player, I was a passing player.

“I could beat players with passing but Vieira he was just so awkward, so tall, so long, so leggy. Just when you thought you had it he would nick it over your head.

“He was just so awkward to play against but what a really good player. He wasn’t just a holding player, he got himself forward, he could score goals, he could make goals. He had great energy.