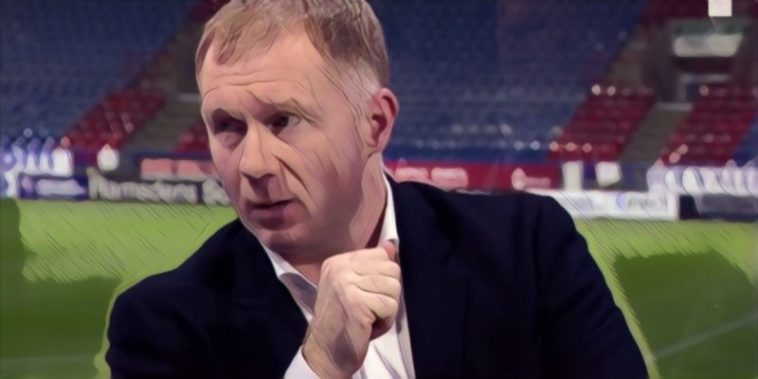 Paul Scholes has identified three positions in which Manchester United need to strengthen as Ole Gunnar Solskjaer continues his rebuild at Old Trafford.

Man United have endured the club’s worst start to a season in 30 years, winning just twice in their opening nine league fixtures to sit just two points above the Premier League‘s relegation zone.

The club ended an 11-game winless run away from home with a 1-0 Europa League victory at Partizan Belgrade on Thursday night, and following the win former United midfielder Scholes gave his verdict on the key areas that need improving in Solskjaer’s side.

“We’re lacking on a real No. 10 I think, a player that can play passes through and is capable of scoring goals as well.

“Also maybe a patrolling midfield player who can set all the play up as well, take the ball off the back four and link it through to the forward.

“But it’s the start of Ole’s rebuild, he didn’t think [Romelu] Lukaku was good enough for that, he didn’t see a place for [Alexis] Sanchez so he’s got rid of them.

“And now over the next year or so he’s got to bring and really find players, special players, in those forward areas that can win games.

"We have to trust in what Ole is doing, he's right at the start of a rebuild."

"It's not his team yet. He needs time."@Persie_Official and Paul Scholes are keeping the faith despite Man Utd's rough start to the season 🇾🇪 pic.twitter.com/HAMnseiCdx

“So I think that’s why counter-attacking on Sunday [against Liverpool], goals like this, probably suited them.

“It’s when you play your Crystal Palace’s and your Newcastle’s when you have all the possession, do you have the players that are special enough in the forward areas to win games of football? And in the midfield areas?

“At the minute it doesn’t look like they do.”

Solskjaer has confirmed that United will look to do business in the January transfer window should the right players become available, and Scholes offered a surprise suggestion by naming out-of-favour Arsenal playmaker Mesut Özil as a player who could help end the club’s lack of creativity.

“Man United could do with someone like Özil who can link a team together,” Scholes added.

“[He is] a player who can link teams together. He has got great quality, he’s shown that in his career.

“He could be an answer short-term, I don’t know. I think that would be up to him, ultimately.

“I can’t [see it happening], but he’s the type of player, short-term, who United could do with.”

Read: Solskjaer not impressed with his sides defence despite Man United’s 1-0 win in Belgrade