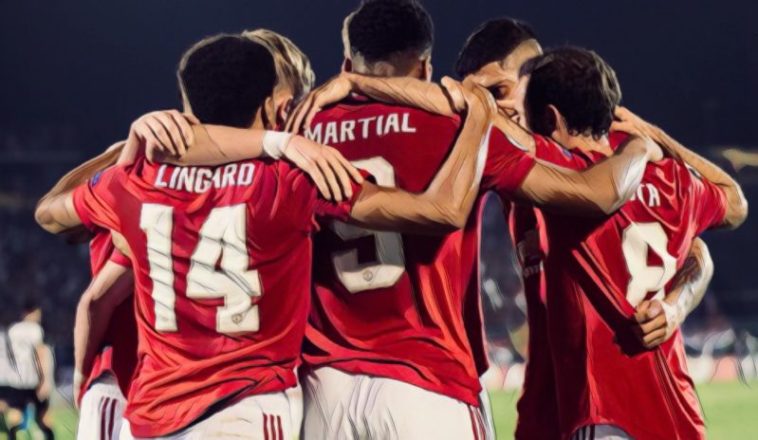 Manchester United moved a step closer to securing their place in the knockout stages of the Europa League after beating Red Star Belgrade 1-0 away tonight.

United boss Ole Gunnar Solskjaer rang the changes, with youngsters Jimmy Garner and Brandon Williams starting, and only four of the side that started in the 1-1 draw against Liverpool last weekend included in the starting XI.

Despite the game being played out in front of a raucous home crowd, there was very little quality on show during the opening exchanges and it was not until late in the half when Manchester United hit the woodwork through Jesse Lingard that the game seemed to come to life ever so slightly.

Red Star attacker Seydouba Soumah then cracked a fine long-range effort off the post that seemed to further energize the home crowd, although United would soon be handed the chance to take the lead from the penalty spot when impressive young defender Williams was taken down in the area after a surging run.

Fit again French striker Anthony Martial stepped up to coolly slot the ball home from 12 yards and send Solskjaer’s men into the dressing room a goal to the good.

Partizan piled the pressure on a shaky looked United back three of Marcos Rojo, Harry Maguire, and Phil Jones, during the second period and had it not been for good work by deputy ‘keeper Sergio Romero and some wasteful Red Star finishing the result may well have looked a lot different.

In the end United would hold on for the win and although tonight’s display was an improvement on their last showing in the competition against AZ Alkmaar, it was still another performance lacking in any real conviction or quality from Solskjaer’s men.

Speaking after the game Solskjaer singled out young defender Williams for praise and admitted his backline will need to sharpen up.

“In the second half I thought we dug in really well in the box. They [Partizan] played well and made us defend too deep – I’m not happy with the defending at the front. It’s been one of our strengths this season but it was non-existent in the second half. It needs sorting out,” Solskjaer told his post-match press conference.

“I thought Jimmy [Garner] grew into the game. He got tired at the end, which is natural. Brandon [Williams] was man of the match.

“He was absolutely excellent. Fantastic attitude, great attitude, great in the air, brave and he gets us a penalty by driving forward with the ball so we have found a left-back there.”

United sit on top of Group L with seven points and their attention now turns to the Premier League, where they will travel to Carrow Road to face Norwich on Sunday.

Read: Five players who smashed it in Champions League gameweek 3