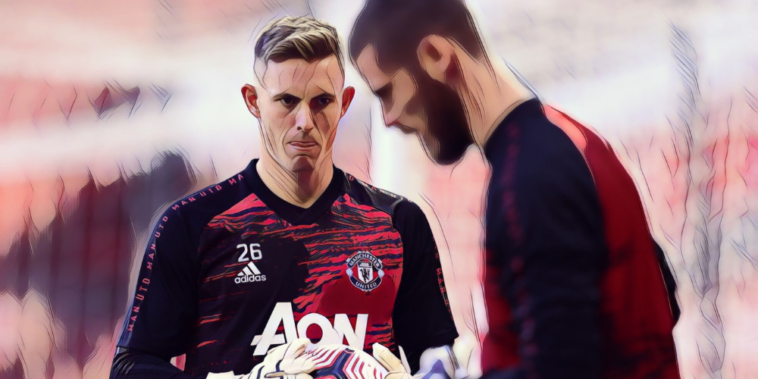 Paul Scholes believes Dean Henderson has now ‘taken over’ as Manchester United number one, following the goalkeeper’s performances in the absence of David de Gea.

Henderson has enjoyed a run in the side in recent weeks with De Gea having returned to Spain for the birth of his child, starting the past five fixtures in all competitions and keeping four clean sheets.

The England international’s latest shut-out helped the Red Devils secure a 1-0 win over AC Milan, victory at the San Siro securing the club’s place in the quarter-finals of the Europa League.

Henderson’s performances have impressed former United midfielder Scholes who believes the 23-year-old should now be handed an extended period as first choice, insisting the goalkeeper could establish himself as England’s number one if he maintains his recent form.

“I think it’s Henderson. I think he has taken it over,” he told BT Sport.

“I thought David [De Gea] had been lucky after the Everton game to keep his place, I thought there were a couple of mistakes where he could have done better.

“There had been a few things before that, a couple of things after that. Not glaring and obvious mistakes, but I just feel a bit more confident with Henderson in there.

11 – Dean Henderson has kept 11 clean sheets in just 18 appearances for Man Utd in all competitions this season, one more than David de Gea has registered in 29 games (10). Opportunity. pic.twitter.com/wSpt0vinaX

“He seems a little bit more relaxed. David has been an amazing keeper for United, he’s been brilliant and he still will be if Dean doesn’t take his chance.

“I just think the time has come to give Henderson a run of games in the team and see how he does.

“I think he possibly should be No1 for England if he carries on this form.”

Henderson will be hopeful of maintaining his place in the side when the Red Devils travel to face Leicester in the FA Cup quarter-finals on Sunday.