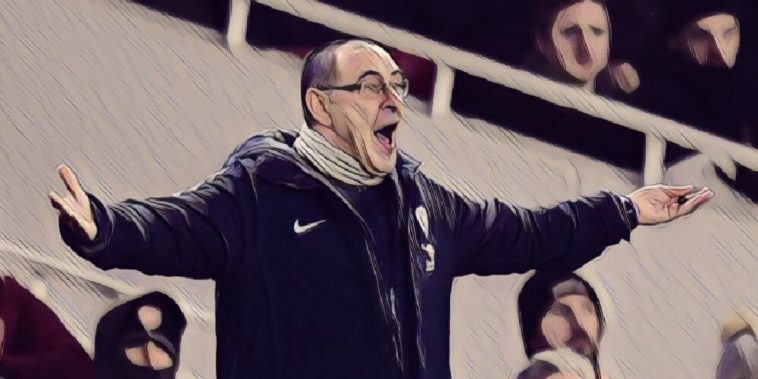 Chelsea are on the brink of sacking Maurizio Sarri as their manager, according to a report.

Former Napoli boss Sarri took over from his countryman Antonio Conte in the Stamford Bridge hotseat during the summer, but his position has started to come under increasing pressure in recent weeks after a series of poor results.

After initially starting the season in excellent form Chelsea have struggled badly since the turn of the year, with Sarri publicly questioning his players mentality on more than one occasion.

Recent humiliating defeats to Bournemouth (4-0) and Man City (6-0) has seen Chelsea slip to sixth in the Premier League table, with speculation growing that Sarri will become the latest Chelsea manager to be sacked.

A report in the Daily Mail says that Chelsea’s players expect their manager to be sacked if they lose either of their next games against Manchester United in the FA Cup or Man City in the Carabao Cup final, while it also paints the picture of growing problems behind the scenes at Stamford Bridge due to owner Roman Abramovich’s visa issues with the UK government.

“The use-by date on Chelsea managers is always short, but in the case of Sarri matters have deteriorated at an alarming rate,” Adam Crafton and Sami Mokbel write.

“The club’s chairman, Bruce Buck, sat in on his pre-match press conference this week in Malmo, then Buck took the peculiar step of going pitchside on Thursday evening to get a close view of Chelsea’s warm-up drills.

“The players’ senses are tingling. One confided in his adviser this week that he expected Sarri to be sacked if the club fail to win at least one of their next two games — against Manchester United in the FA Cup, and Manchester City in the Carabao Cup final.

“Ultimately, the decision will not fall to Buck. Director Marina Granovskaia runs the show and she will make recommendations to owner Roman Abramovich, if he does not beat her to it.

“Sarri admits he has not heard from Chelsea’s Russian owner in the past three weeks, and the growing impression is that of a club whose troubles extend beyond the dugout.

“The financial news website Bloomberg has spoken of the ‘last days of Londongrad’. Abramovich has not attended a Chelsea match this season and has not been seen in London since his visa renewal application was denied last year.”