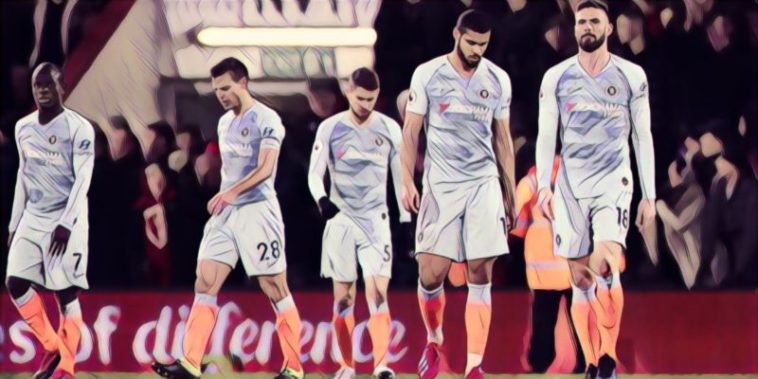 Maurizio Sarri has once again questioned Chelsea’s mentality after they suffered a heavy 4-0 defeat to Bournemouth, leaving the Italian ‘frustrated’.

It was a truly horrific night on the South Coast for Sarri, who steered Chelsea to their heaviest league defeat since being beaten 5-1 by Liverpool back in 1996.

As has often been the case this season, Chelsea dominated proceedings, finishing the game with just shy of 70% possession, but despite the arrival of Gonzalo Higuain, they were unable to find the net for the fifth time in their last 11 outings in all competitions.

Second half goals from Josh King (2), David Brooks and Charlie Daniels saw Chelsea slip to their second consecutive Premier League defeat, and speaking after the game, Maurizio Sarri said his side simply stopped playing after going a goal behind.

“It is very difficult to have an idea about the performance. I think we played well in the first half, we conceded the goal and we stopped to play. We didn’t play as a team, but 11 players,” Sarri said in his post match press conference.

“We were in trouble, it was difficult to say why. After the first half there was the possibility to solve the problem. Not with that kind of reaction, so it is difficult to understand why.

“I wanted to try to understand after the match, I spoke to the players but it is difficult for them to say why. I have to try again tomorrow because I need to see why.”

Sarri has previously slammed the mentality of Chelsea’s players, saying that they are difficult to motivate, and the Italian was once again concerned by his side’s mindset.

“At the moment they can react against a big team, when we play against a big team we can play with a big level of motivation. But in this match it was different. Suddenly after the first goal we were not able to play. I think it was a different situation. Of course about the mentality.”

Despite the poor run of results though, Sarri doesn’t feel like he is under pressure at Stamford Bridge, despite Chelsea’s infamous reputation for hiring and firing managers.

“No. I feel frustrated, not under pressure. I did not see my work, so I am frustrated.”

The result leaves Chelsea outside the top four, behind Arsenal on goal difference, and only two points ahead of the resurgent Manchester United.