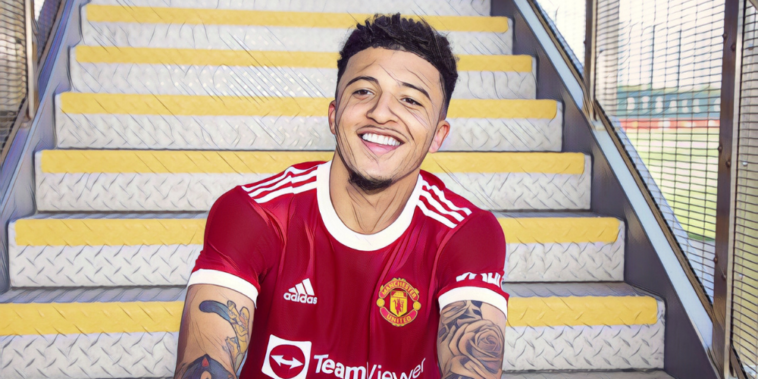 Jadon Sancho admits he is ‘buzzing’ following his move to Manchester United and has revealed his instant connection with Bruno Fernandes.

The winger returns to the Premier League four seasons after leaving Manchester City in search of regular first-team football and, speaking to Rio Ferdinand for BT Sport, admits he can’t wait to get started as Ole Gunnar Solskjaer’s side face Leeds in their season opener tomorrow lunchtime.

“It feels nice, definitely,” he said. “I’ve been waiting for a long time for this move. I’m just glad it’s over now and I can get ready to start the season against Leeds. I’m buzzing.”

Sancho outlined what the fans can expect from the 21-year-old following his marquee arrival, insisting his aim is to bring ‘goals, assists and a bit of flair’ to side, in addition to a drive to win.

“Goals, assists, a bit of flair and definitely eager to win,” he added.

“That’s one of my things I’ve always done. I’m always trying to help the team to win. I love winning, that’s my mentality and hopefully I can you know win a few games for Man United, if it’s a close game and things like that. I’m looking forward to it.”

Ferdinand discussed with Sancho the development of Cristiano Ronaldo at Manchester United, pointing to the star’s evolution from fleet-footed talent to elite goalscorer at Old Trafford.

Sancho admits that posting big numbers for goal involvements is something he is determined to do and has opened up on his instant connection with new teammate Bruno Fernandes.

“Definitely. I can see that [mentality] in a few of the players, like Bruno. Today we were on the same team and we just linked up really well. Me and him love winning so I’m glad me and Bruno have the same mindset because it’s needed, especially in a big team like this. If you want to win things, you have to learn how to win in training and matches. It’s important.”

Sancho added that he feels ready to make an impact ahead of the weekend clash with Leeds and is hopeful he can make his bow for the Red Devils against Marcelo Bielsa’s side.

“I feel ready. Today in training I felt sharp and hopefully I can get introduced to the game on Saturday.”