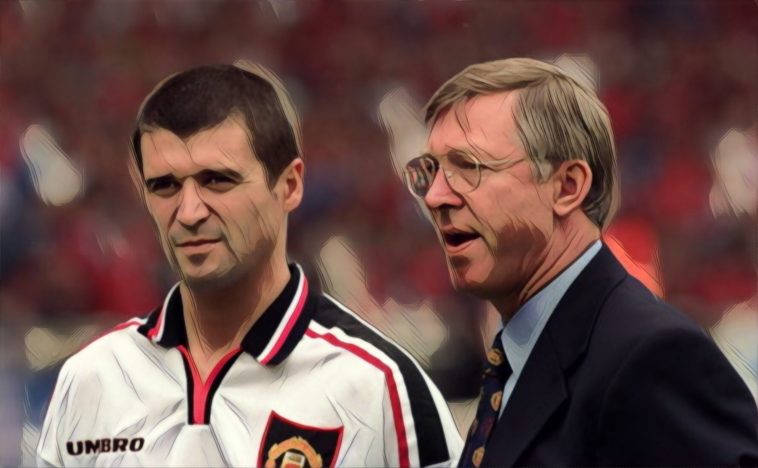 Roy Keane excoriated his ex-boss this week, criticising Ferguson’s man-management, how he pushed him out the door, and nepotism at the club.

It has been 14 years since Roy Keane left Manchester United in acrimonious circumstances, but there is still no love lost between the Irishman and his former manager Alex Ferguson.

The no-nonsense midfielder left the club to join Celtic in 2005 after twelve years at Old Trafford, during which time the former captain won seven Premier League titles, with his infamous MUTV interview the catalyst for his fallout with the boss.

The Cork native had no problem sticking the boot into the Scot when speaking at a Off The Ball event for Cadbury’s in Dublin on Wednesday night.

“People talk about Ferguson’s man-management,” said Keane, “don’t be kidded on by all of it.

“I was at the club when Bryan Robson left, when Steve Bruce left, two brilliant servants for Manchester United, and I didn’t like the way they were treated.”

When referencing that interview, in which he heavily criticised a number of teammates, Keane clearly feels that there was no need for him to be banished from the club.

“We’d had loads of heated discussions over the years, sometimes as a team, but you’ve got to roll with that,” contended Keane.

“We’re grown men fighting for the same thing. There’s going to be a bit of argy-bargy but I’m sure there are people here working in industries where things get heated.

“I didn’t leave the office that day thinking this was the end of my career at Manchester United, but if you think I’m going to sit there, I don’t care if its Alex Ferguson or the Pope… I’m going to fight my corner.

“Ferguson came out afterwards and said he always did what was best by Manchester United. Nonsense.”

"And Ferguson came out afterwards: 'I always did what was best for United.' Nonsense! His son played for the club and won a league medal…"

The ex-Celtic man expanded upon that point, highlighting the nepotism within the club during the Ferguson era.

“His son Darren played for the club and won a league medal,” an dumbfounded Keane exclaimed, “[he was] very lucky.

“(Alex Ferguson’s) brother was the chief scout for Manchester United for a long time.

“I’m surprised his wife wasn’t involved in the staff somewhere.

“Darren was (the manager) at Preston North End and lost his job. He had a couple of young players on loan from Manchester United, (but) guess what happens the next day?

“They’re pulled out of Preston. Is that doing the best for Manchester United? Do me a favour.”

Keane revealed he still has not spoken to Ferguson in the decade and a half since, even when the former manager was dealing with a health scare, and says he has no intention of doing so either.

“I think when he apologises I will probably say hello to him, yeah,” admitted Keane, “(but) I’ve no interest in speaking to the man.”