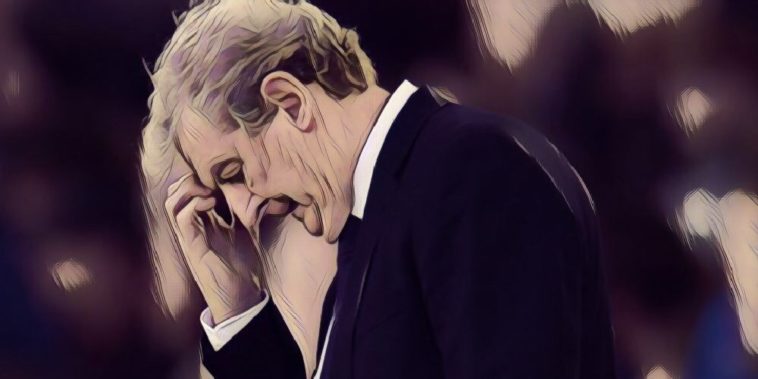 Welcome to Stick or Twist, our weekly column here at The Football Faithful taking a look at the under-fire manager of the moment and ponders whether they deserve the sack or not.

We look at factors such as recent form, fan opinion and media commentary, while asking important questions such as ‘Is there a viable replacement available?’ and ‘Is the team just experiencing a dip or are they in an irreversible tailspin?’ This week we take at look at…

Odds For The Sack:

If it seems a bit odd to ponder the tenability of a manager’s position after they have just guided their team to a draw and clean sheet against Manchester United, then consider this: Palace have not won in any of their last eight games, gaining a measly three points out of a possible 24. Also consider the fact the Red Devils have not been as good as Watford and Bournemouth this season, and that results isn’t quite as impressive as it would normally be.

The Eagles’ last win – a 1-0 away win over Huddersfield Town – came in September, and the only other Premier League victory to their name was the opening day fixture against Fulham at Craven Cottage, which means the Selhurst Park faithful have been starved of a win thus far.

We should point out that Palace have had to face United, Tottenham Hotspur, Chelsea and Arsenal in their last four fixtures alone, the latter of which was an impressive 2-2 draw with the Gunners.

In 13 games Palace have hit the net just 8 times, and the goals have become more scarce as the season has worn on. Their average of 0.69 goals per game falls to a woeful 0.38 when looking at just the last 8 matches, which can only be matched by Southampton for pure attacking badness.

Defensively they have been relatively strong, conceding 17 goals, making their defence the joint-10th best in the league. They’ve also had no errors leading to goals and kept four clean sheets along the way, so there is at least a solid base from which to build upon for the London side.

Compared to last season, the team are conceding fewer goals, but are scoring almost half a goal less on average per game too.

According to Expected Goals (xG) however, Palace have been better in attack than their current amount of goals would indicate. Understat’s model says they have an xG of 14.15, over six goals more than they’ve put away up to now.

There is a notion, going back a few years, that Palace generally under-perform relative to the talent in their squad, and there may be some truth in that. But when everything comes out in the wash, sometimes the team is what it is, and they’ve never really climbed out of that lower mid-table grouping.

The supporters don’t seem to be frothing at the mouth, or anything like it really. Well, apart from this really angry guy. But there’s always one.

It’s the fact that Roy Hodgson WILL NOT change tactics period. That’s WHY we’re in this situation. I’m going to say this & it will be unpopular, I’m also respecting the point at Old Trafford. If Sørloth starts we get ALL 3 Points.

Given that fixtures have been tough lately, the fan base has given Roy some rope, but a win has to come soon, or else the pitchforks might come out.

Going by the statistics, Crystal Palace could be in the mid-table safety blanket had they finished their chances better. With patience, they should begin to score more frequently and move up the table eventually, much as they did last year.

That covers the short-term, but the bigger question that should be on the minds of Palace supporters, and more importantly the hierarchy at the club, is what does the future of the team look like? And does that future include Roy Hodgson?

The former England manager is, to use a cliché, a ‘safe pair of hands’. Aside from his stints at Liverpool and Blackburn Rovers, he has always guided struggling clubs to safety and even had them performing quite well at times.

While I feel the perception of Roy as a so-called footballing dinosaur is harsh, the man is 71-years-old after all, and it is pertinent to ask whether or not he is past it.

There is a newer, younger breed of manager out there. Think Eddie Howe at Bournemouth, Nuno Santo at Wolves, David Wagner at Huddersfield – these are all relatively young men bringing fresh styles of play and new ways of thinking into the English game at the highest level.

Although Palace had an aborted attempt at a culture change last year under Ronald De Boer, they must seriously consider getting on board before they are eventually cut adrift. If Hodgson were to leave or be sacked at the end of the season, who do they turn to: the ‘tried-and-trusted’ likes of Big Sam (again), David Moyes and Mark Hughes, or perhaps someone who can provide vim and vigour like Aston Villa boss Dean Smith?

For now Crystal Palace are safe with Hodgson guiding the way, but at some point they will have to look beyond the short-term and at the bigger picture.