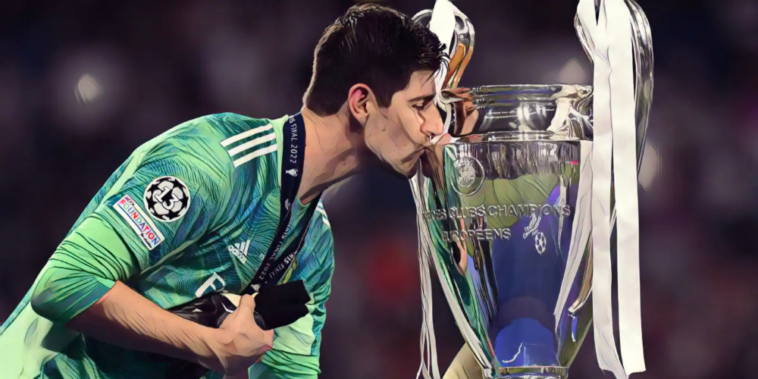 Thibaut Courtois etched his name into the history of the Champions League with a Man of the Match final performance this week, becoming just the third goalkeeper to have achieved the feat.

Courtois was in inspired form as Real Madrid beat Liverpool 1-0 at the Stade de France, making a string of saves as the Spanish side secured a 14th European crown in Paris.

Following the Belgian’s brilliant performance, we’ve looked back at five of the best goalkeeping performances in Champions League finals.

Olivier Kahn was viewed as one of world football’s finest shot-stoppers at the turn of the millennium, with the former Germany international remaining the only goalkeeper to have won the World Cup’s Golden Ball.

One year before starring at the 2002 finals in Japan and South Korea, Kahn had helped Bayern Munich to be crowned as champions of Europe for the first time since the 1970s.

Bayern faced a Valencia side into their second successive final in 2001, with Kahn producing faultless performance on club football’s biggest stage.

He conceded only a penalty in normal time as the final ended in a 1-1 draw, before rising to the occasion in the shootout with three stunning saves.

Kahn made stops from Zlatko Zahovic, Amedeo Carboni and Mauricio Pellegrino as Bayern won the trophy for the first time in the Champions League era.

Gianluigi Buffon may have ended on the losing side during the 2003 final, but it was his performance which ensured the first-ever all-Italian final ended goalless at Old Trafford.

Juventus and AC Milan went head-to-head for European glory during the 2002/03 campaign and a tense final ended without goals as the two sides played out a stalemate.

Buffon was on hand to thwart the Rossoneri, including a brilliant reaction save from Filippo Inzaghi which ranks among the finest seen in a Champions League final.

He held firm for 120 minutes of action, but was unable to drag his side over the line as Juventus lost out in the lottery of the penalty shootout.

Edwin van der Sar became the second goalkeeper to win a Man of the Match accolade in the Champions League final, following his role in the first-ever all-English showpiece.

The Dutchman made an impressive one-handed reaction save to deny Michael Ballack at close range in the first half, before emerging as the hero of the shootout after saving from Nicolas Anelka to crown the Red Devils champions.

The win was Van der Sar’s second in the Champions League after lifting the trophy with Ajax in 1995, the longest gap between two successes in the competition’s history.

Petr Cech had a starring role in Chelsea’s first Champions League triumph, as the Blues became London’s first European champions after beating Bayern Munich in their own backyard.

Chelsea were underdogs against a Bayern team playing in a home Champions League final at the Allianz Arena, coming back to beat the Bundesliga side in dramatic fashion.

Cech’s was the busier of the goalkeepers and made an early reaction save to turn Arjen Robben’s effort against the post with an outstretched foot. Bayern were dominant and had 35 shots on goal, whilst their seven on target were more than double Chelsea’s total.

Despite the disappointment of Thomas Muller’s opener, a late equaliser from Didier Drogba forced extra-time and set the stage for Cech to make a decisive impact.

Cech was the hero of the added period, saving a penalty from Robben to ensure the final headed towards a shootout.

He came to the fore once again as Chelsea won on penalties, making saves from Ivica Olic and Bastian Schweinsteiger to crown the west Londoners champions of Europe.

Courtois’ Man of the Match performance in the 2022 final ranks as one of the competition’s most memorable goalkeeping performances, with the Belgium denying a dominant Liverpool to set the platform for Real Madrid’s success.

Courtois made a huge nine saves as Liverpool were continually frustrated by the brilliant Belgian, who underlined his status as one of the world’s premier goalkeepers in Paris.

The 30-year-old was in excellent form as Real Madrid weathered significant pressure, with Liverpool registering 23 shots on goal and the eventual champions just three.

His nine saves set a new record for a Champions League final and saw Courtois make his impact on the European history of a club with more success in this competition than any other.