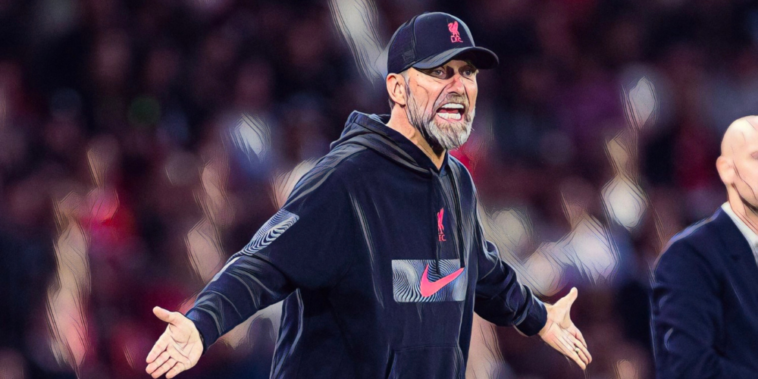 Liverpool have endured a disastrous start to the new season and are without a win in their opening three Premier League fixtures for the first time in a decade.

The Reds’ 2-1 defeat at Manchester United leaves last season’s runners-up 16th in the Premier League and is just the fourth time that Liverpool have gone winless in their opening three.

Following the defeat at Old Trafford, we look at the four seasons in which Liverpool have failed to win in their opening three Premier League games.

After finishes of third and fourth across the previous two campaigns, hopes were high that Liverpool could again challenge at the top end of the Premier League in 1997/98.

The Reds’ campaign began poorly however, with Roy Evans’ side held to a 1-1 draw at Wimbledon on the opening weekend. Liverpool’s first fixture at Anfield then ended in defeat to Leicester, before a late equaliser from Martin Dahlin earned Blackburn a 1-1 draw against the Reds in the third fixture of the campaign.

Back-to-back wins followed as Liverpool’s season got up and running, with the Reds ending the campaign third in the Premier League. However, Liverpool finished a distant 13 points behind champions Arsenal, despite a breakthrough campaign from Michael Owen who became the first teenager to win the Premier League’s Golden Boot.

Gerard Houllier’s final season in charge saw Liverpool make a stuttering start to the campaign, with the opening fixture seeing Chelsea win 2-1 at Anfield. The west Londoners had beaten Liverpool in a winner-takes-all clash for Champions League football on the final day of the previous campaign, a game which paved the way for Roman Abramovich’s takeover at Stamford Bridge.

Summer arrival Juan Sebastien Veron was on the scoresheet as the Blues won on Merseyside, before goalless draws with Aston Villa and Tottenham extended Liverpool’s winless start to the campaign.

The Reds’ first win of the campaign came in the Merseyside Derby in late August, as Harry Kewell scored his first goal for the club in a 3-0 win at Goodison Park.

Liverpool finished fourth to secure Champions League qualification, but were closer to relegated Leicester than Arsenal’s Invincibles in the title race, ending the campaign a huge 30 points behind the Gunners.

Brendan Rodgers’ reign at Liverpool began with a horror show at The Hawthorns , as West Bromwich Albion inflicted a heavy defeat on his side.

Liverpool’s 3-0 loss was a bitter blow for the new manager, who was forced to wait until September 29th for his first victory.

The Reds bounced back with a creditable 2-2 draw with champions Manchester City in their second fixture, but a 2-0 loss to Arsenal at Anfield left Rodgers’ side in the relegation places.

The club’s winless run extended to five games after a draw at Sunderland and loss to Manchester United, before a Luis Suarez hat-trick inspired a drought-breaking win at Norwich.

Liverpool ended the campaign seventh – their joint-second lowest league finish of the Premier League era – to miss out on qualification for European football.

Jurgen Klopp will not have envisaged his side’s woeful start to the new campaign, with Liverpool sitting 16th in the Premier League after a winless campaign to date.

Last season the Reds came close to an unprecedented quadruple, falling just one point short in the Premier League title race before losing the Champions League final to Real Madrid.

Klopp’s side were expected to challenge for the Premier League once again, having reached 90+ points for the third time in four seasons in 2021/22.

Five teams failed to win any of their first three Premier League games this season:

Jürgen Klopp was not expecting to be a part of that list. 😬 pic.twitter.com/zBoat2jIbX

However, draws with Fulham and Crystal Palace were followed by Monday’s 2-1 loss at Manchester United, in the club’s worst start to a league season for a decade.

A mounting injury list has not helped Klopp’s cause, but he will need his team to respond and quickly if Liverpool are not to fall further behind. Manchester United were the last team to win the Premier League after failing to win in their opening three games (2007/08), as Sir Alex Ferugon’s side bounced back to seal a league and Champions League double.