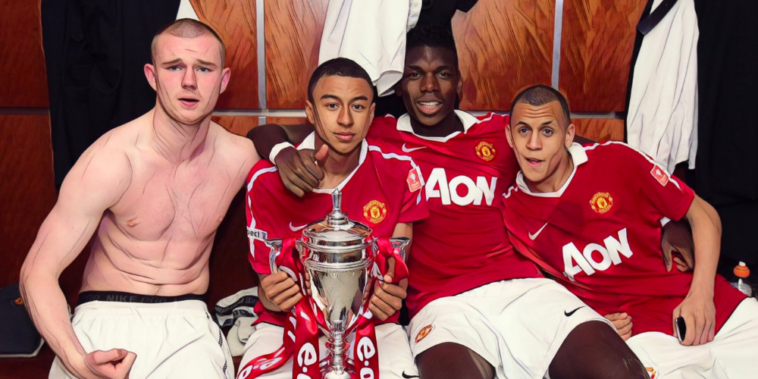 Manchester United are the 2021/22 winners of the FA Youth Cup, after the club’s brightest prospects beat Nottingham Forest 3-1 to win the trophy for the first time in over a decade.

The win was a record-extending 11th FA Youth Cup for the Red Devils but a first since 2011, Alejandro Garnacho’s second-half double helping the side to a win in front of a record-breaking 67,492 crowd at Old Trafford.

Garnacho will be one of several starlets now hoping for a senior breakthrough into first-team football and following United’s win we’ve looked back at the starting XI from their 2011 FA Youth Cup triumph over Sheffield United.

Johnstone failed to make a senior appearance for Manchester United despite spending a further seven years on the club’s books, embarking on seven loan spells before a permanent move to West Bromwich Albion in 2018.

The 28-year-old has since racked up 167 appearances for the Baggies and was named as the club’s Player of the Season despite relegation from the Premier League in 2020/21.

Out of contract this summer, the goalkeeper has been linked with free transfer moves to a number of Premier League sides including Tottenham and a return to Old Trafford.

He will want assurances over first-team football with a World Cup on the horizon, however, having earned three caps for England since making his debut in 2021.

The Irish youth international was another who failed to make the breakthrough, spending time away from the club before a permanent move to Sheffield United in 2013.

McGinty struggled to make the grade with the Blades, however, before eventually finding regular first-team football at non-league level with Aldershot Town and Torquay United.

He has spent the past four seasons in Scotland, representing clubs such as Partick Thistle, Greenock Morton and current club, Ayr United.

Tom Thorpe captained the victorious Manchester United side in the 2011 final, but his career has failed to hit the heights enjoyed by several former teammates.

The centre-back made one brief Premier League appearance for the Red Devils before leaving the club, enjoying short stints with the likes of Birmingham, Rotherham and Bolton Wanderers, earning promotion from League One with the latter in 2016/17.

Thorpe represented every England age group team between Under-16s and Under-21s, but has been without a club since 2018 after a short spell with Indian Super League side ATK.

The centre-back spent two seasons with Burnley and helped the club to Premier League promotion in 2015/16, before completing a £25m move to Everton in 2017.

He remains with the Toffees and has since made 184 appearances across all competitions, in addition to winning 12 caps for England at senior level.

Fornasier returned to his native Italy after failing to make an appearance for the senior team, spending time with the likes of Sampdoria and Pescara.

His career since has been spent in the lower leagues of Italian football with the defender signing a three-year contract with Serie C side Monopoli in September 2021.

The Bury-born midfielder has forged a solid career since leaving Manchester United, enjoying successful spells with a number of Championship clubs including Fulham, Millwall and Luton.

Tunnicliffe was named as the Jimmy Murphy Young Player of the Year during that 2010/11 season, but made just two first-team appearances at Old Trafford.

He signed for Portsmouth on a free transfer ahead of the 2021/22 season and made 26 appearances for the League One club this season, scoring two goals.

Paul Pogba is the highest-profile player from Manchester United’s 2011 FA Youth Cup side and is one of two players in this side who remain at the club.

Pogba initially left the Red Devils to sign for Juventus on a free transfer in 2012 after becoming frustrated with his lack of opportunities, winning four consecutive Serie A titles in Italy before a then £89m world record return to Old Trafford.

Just @PaulPogba in the zone in the FA Youth Cup back in 2011 😤#MUFC | #PhotoOfTheDay pic.twitter.com/zx8tD9ol6s

The France international – who won the World Cup with Les Bleus in 2018 – has won the League Cup and Europa League since returning to United in 2016, but in truth has performed below expectations across his six seasons with the club.

He is expected to leave on a free transfer once again this summer as he approaches the end of his deal, with Real Madrid, PSG and Juventus all linked.

Jesse Lingard is the other member of this team who remains a Manchester United player, but like Pogba is set to leave on a free transfer this summer.

Lingard – who opened the scoring in the first leg draw with Sheffield United – had to be patient for his chance in the side and enjoyed several loan spells before making his debut in 2014.

He scored the winning goal in the 2016 FA Cup final and added further Wembley goals in Community Shield (2016) and League Cup successes (2017), whilst earning 32 caps for England at international level.

The 29-year-old was loaned to West Ham last season and impressed, before being marginalised once again during the current campaign. The Hammers are among a number of clubs reportedly interested in his signature this summer.

Hailed as the most exciting natural talent he had seen by Sir Alex Ferguson, the story of Ravel Morrison’s career has been one of wasted potential.

The star of the club’s Youth Cup win, he scored twice in the second leg win over Sheffield United and seemed set for a huge future, but questions over his application and circumstancew meant the midfielder made just three first-team appearances.

His ability, however, was something special.

“Ravel Morrison’s ability was just a scandal,” former United defender Gary Neville said, via talkSPORT, after recalling one performance. “He was playing in a midfield three with Pogba and Ryan Tunnicliffe. All of them were outstanding, but Ravel was the principal game changer.

“He was an unbelievable talent, a Paul Gascoigne-type who could beat men and score some incredible goals. There are few players in central midfield who can beat people – Ravel could drift past them.”

Morrison’s career has been nomadic since with spells at West Ham and QPR in addition to stints in Italy, Mexico, Sweden and the Netherlands.

A quite outrageously beautiful goal from Derby County, finished by Ravel Morrison 🔥 pic.twitter.com/Nqspey2ACh

The 29-year-old spent the 2021/22 season at Derby County and made 36 appearances during the club’s failed attempt to stay in the Championship, scoring four goals.

The Dutch forward began his career with Ajax before signing for United in 2010, winning the FA Youth Cup during his first season in England

Van Velzen failed to make the grade after that success, however, spending time on loan with Royal Antwerp before returning to the Netherlands.

He had a short spell at Crawley Town in 2019/10 and currently plays his football for SC Telstar in the second-tier of Dutch football.

Will Keane scored three goals across the two legs of the FA Youth Cup final, with the forward having been a prolific presence for the Red Devils at youth level.

The twin brother of centre-back Michael, he made just three appearances for United at senior level and endured mixed periods during several loans away.

He has had permanent spells at Hull and Ipswich before signing for Wigan Athletic in 2020, where he has since enjoyed the best period of his career.

An international call-up and the @SkyBetLeagueOne Golden Boot 🤩

Truly a season to remember for @LaticsOfficial's Will Keane 👏 #wafc pic.twitter.com/j685xBYb3i

Keane scored 26 league goals this season to fire Wigan to promotion, earning himself the League One Golden Boot and the club’s Players’ Player of the Year award.

The 29-year-old has also earned three caps for the Republic of Ireland since changing his international allegiance in 2021, having represented England up until u20 level.