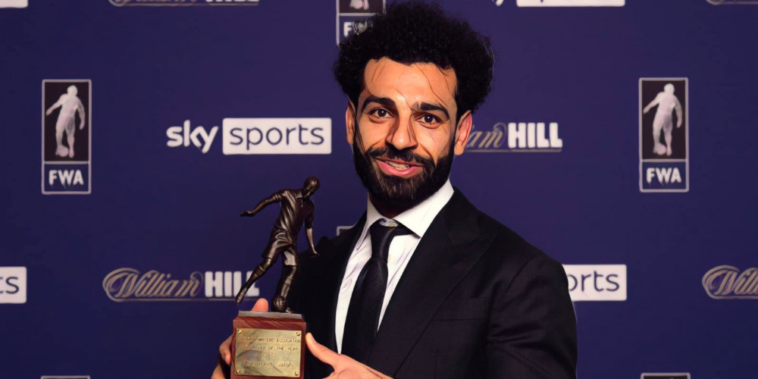 Mohamed Salah has been named as the Football Writers’ Association Footballer of the Year following a fine individual season for the Liverpool forward, with the Egyptian international leading the Premier League for both goals and assists.

Salah’s award is his second FWA honour and he adds his name once again to an illustrious list of players to have been acknowledged as the Premier League‘s finest.

We’ve decided to look back at the past winners of the prestigious accolade, here is every FWA Footballer of the Year winner of the last decade:

Winner of the PFA Player of the Year award two seasons prior, Gareth Bale elevated his game to new heights during a sensational 2012/13 to cement his position as the most exciting talent in the Premier League.

The Tottenham winger was simply irrepressible in one of the Premier League’s great individual campaigns, combining blistering pace with a penchant for the spectacular, scoring 21 league goals including many stunning efforts from distance.

That wand of a left foot 😍

Gareth Bale whipping up some magic for @SpursOfficial in 2013 is #GoalOfTheDay pic.twitter.com/3TVZlVvkS2

The Welsh international’s performances saw him claim the FWA Footballer of the Year alongside a second PFA Player of the Year triumph, whilst he also became just the third player – after Andy Gray and Cristiano Ronaldo – to win the senior and young player PFA awards in the same season.

Bale’s scintillating showings led to an almost inevitable world-record move to Real Madrid at the end of the season and whilst he has won four Champions League titles during his time with the Spanish giants, he has arguably never been as unplayable as his final season in the Premier League.

The inspiration behind Liverpool’s pursuit of the Premier League under Brendan Rodgers, Luis Suarez scored 31 goals and provided a further 12 assists in just 33 league appearances as the Reds were narrowly pipped to an elusive league title by Manchester City.

Having missed the first five games of the season through suspension, Suarez returned with a brace at Sunderland before embarking on an inspirational individual campaign, scoring three hat-tricks throughout the season including a stunning four-goal haul against Norwich at Anfield.

Suarez formed a brilliant understanding with strike partner Daniel Sturridge and the duo finished as the two leading scorers in the Premier League, the former winning a clean sweep of individual honours after adding the FWA Footballer of the Year award to his PFA Player of the Year crown and Golden Boot.

The lure of Spanish football’s giants once again proved too strong for the Premier League’s outstanding player, however, as the Uruguayan signed for Barcelona in a deal worth £75m at the end of the season.

Surprisingly the first player on this list to win the award in a title-winning season, Eden Hazard was a talismanic presence for Chelsea as they secured the Premier League title under Jose Mourinho during the 2014/15 campaign.

The Belgian was at his brilliant best as Chelsea were crowned champions of England once more, scoring 20 goals in all competitions to finish ahead of Tottenham’s Harry Kane and teammate John Terry in the voting.

How Eden Hazard secured the 2014-15 title for Chelsea 😅pic.twitter.com/7DZ49teFnc

Hazard in full flight was a captivating talent to watch during his time in English football, bringing artistry to the West London side and ghosting past opposition challenges with his mix of close control, agility and acceleration.

His 14 league goals were added to by nine assists as Hazard scooped the Football Writers’ award alongside the PFA Player of the Year, adding to his PFA Young Player of the Year accolade won the previous season.

Leicester’s improbable title triumph seems just as implausible years later, the Foxes winning the first league title in their history despite being pre-season favourites to lose their Premier League status.

Claudio Ranieri’s side were fired by a prolific season from Jamie Vardy, the forward’s meteoric rise from the depths of non-league football reaching new heights as he was crowned as the Premier League’s finest player.

Vardy narrowly finished as runner-up for the division’s Golden Boot during a season in which he set a new record for most consecutive fixtures scored in with 11, the star’s performances seeing him become the first Leicester player ever to win the FWA Footballer of the Year award.

Vardy’s stunning season saw him named as a deserved winner of the accolade ahead of teammates Riyad Mahrez and N’Golo Kante, with a total of seven Leicester players nominated following the most memorable season in the club’s history.

N’Golo Kante’s role in Leicester’s title-triumph saw him swiftly attract the attention of the Premier League’s biggest sides, joining Chelsea in a big-money deal and instantly becoming a central figure in another title-winning side.

The Frenchman’s relentless energy and drive in the middle of the park proved crucial as Antonio Conte’s side romped towards the Premier League title, overcoming a difficult start to post a 13-game winning run and finish seven points clear of runners-up Tottenham.

Throwback to when Chelsea won the 2016-17 Premier League and celebrated by launching N'Golo Kante into the air 🥳 pic.twitter.com/ZudbZ8DsFn

Kante became the fifth French player – after Eric Cantona, David Ginola, Robert Pires and Thierry Henry – to win the FWA Footballer of the Year award at the end of season, his award coming alongside the PFA Player’s Player of the Year accolade as he pipped teammate Eden Hazard to both honours.

Mohamed Salah reintroduced himself to the Premier League in stunning style after arriving at Liverpool in 2017, taking the division by storm after previously struggling to make an impression at Chelsea.

Salah had flourished during his time in Italian football with Fiorentina and Roma and made a record-breaking impression on Merseyside, scoring prolifically to win the Premier League’s Golden Boot alongside both the FWA Footballer of the Year and PFA Player of the Year accolades.

His list of personal records included most goals in a 38-game Premier League season (32), alongside most teams scored against in a single campaign (17) and most individual games scored in (24).

Salah’s season saw him establish himself as one of world football’s finest attacking talents, scoring 44 goals in all competitions as he helped Liverpool to a top-four finish and the final of the Champions League.

Raheem Sterling became the first Manchester City player in half a century to win the FWA Footballer of the Year in 2018/19, the winger comfortably finishing ahead of runner-up Virgil van Dijk in the voting after helping his side secure a second successive Premier League title.

The England international scored 25 goals in all competitions as Pep Guardiola’s side set the standard, becoming the first side in history to win English football’s domestic treble.

Sterling’s recognition came amid his growing influence both on and off the pitch, evolving into one of the Premier League’s finest players and using his platform to show bravery in the fight against racism in wider society.

The star’s award came alongside the PFA Young Player of the Year award as voted by his fellow professionals, Sterling a shining example to his peers for both his talent and willingness to push for change.

Jordan Henderson was named as the FWA Footballer of the Year after captaining Liverpool to a first league title in three decades in 2019/20.

Henderson beat off competition from Manchester City’s Kevin De Bruyne and Manchester United’s Marcus Rashford to scoop the honour, a deserved recognition for a selfless player in a side which won the Premier League with a record seven games to spare.

Premier League managers react to Jordan Henderson's FWA Footballer of the Year award… including a little something from the man himself. 👏 pic.twitter.com/DwRDtDbVxB

The England international’s drive and leadership were central to the success of Jurgen Klopp’s team, who also added the UEFA Super Cup and Club World Cup to their ever-growing silverware cabinet.

Henderson’s influence during the unprecedented coronavirus crisis also won the 30-year-old plaudits, the Liverpool skipper leading the ‘Player’s Together’ initiative which saw Premier League stars contribute financial aid to the NHS amid the pandemic.

After years of near-relentless criticism, Henderson’s importance to a formidable Liverpool side was finally acknowledged by those outside of Anfield.

Ruben Dias was named as the FWA Footballer of the Year in 2020/21 with the defender’s signing the catalyst behind Manchester City’s reclaiming of the Premier League title.

The Portugal international arrived from Benfica and transformed Pep Guardiola’s defence, becoming the first defender since Steve Nicol in 1989 to win the accolade and only the third player to win the FWA award in their first season in England, following Jurgen Klinsmann (1995) and Gianfranco Zola (1997).

Dias’ leadership helped City to the Premier League title with the division’s best defence, whilst he was also influential as the club won the Carabao Cup for a fourth consecutive season and reached a maiden Champions League final.

The centre-back finished ahead of Tottenham’s Harry Kane and teammate Kevin De Bruyne – who claimed the PFA Player of the Year Award – in the voting.

Mohamed Salah has been named as the FWA Footballer of the Year for a second time this season, adding to his 2017/18 accolade with another recognition from the Football Writers’ Association.

Salah has been in sensational form this season to lead the Premier League for both goals and assists, registering 35 goal involvements in just 29 league starts for the Reds in 2021/22.

The Egypt international is leading the race to win a third Premier League Golden Boot this season and his goals have propelled Liverpool’s pursuit of an unprecedented quadruple of major trophies.

Jurgen Klopp’s team won the Carabao Cup earlier in the campaign and have both FA Cup and Champions League finals to come, whilst a Premier League title race with Manchester City looks set to go down to wire with the Reds just a point behind the league leaders.

Read – Remembering every PFA Player of the Year from the 90s