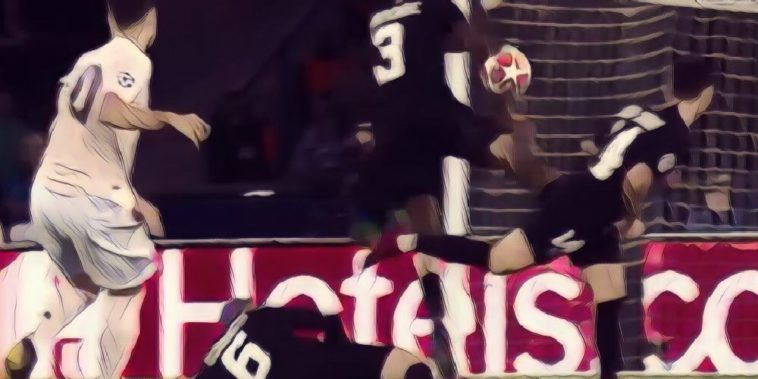 Manchester United completed one of the most unlikely Champions League comebacks last night, becoming the first team in UCL history to overcome a two-goal first-leg deficit to progress to the quarter-finals.

However, their 3-1 victory at the Parc des Princes against French champions PSG wasn’t without a bit of controversy, as referee Damir Skomina awarded United a last-minute penalty thanks to the intervention of VAR.

Diogo Dalot’s 90th minute strike was deflected behind off Presnel Kimpembe for a corner, only for the Video Assistant to summon the referee over to review the footage, who, after what seemed like an eternity, pointed to the spot. Up stepped Marcus Rashford, and the rest, as they say, is history.

While the decision to award United the penalty has widely been questioned among fans and the media alike, two former Premier League referees have defended the decision, with Mark Clattenburg insisting that Skomina applied the rules to the letter of the law.

“The referee has made the right decision in awarding Manchester United their late penalty following the handball by Presnel Kimpembe – he has applied the laws as UEFA wish them to be,” Clattenburg wrote in his column for the Daily Mail.

“It has been given because of UEFA’s recent instruction to referees, which came about after Manchester City conceded a similar penalty at Schalke last month.

“They want referees to give handball when the arm is out and is in a non-natural position, and to that end the referee has been consistent here.”

However, it wasn’t just Clattenburg who thought the Slovenian referee made the right decision, with fellow former Premier League referee Peter Walton also saying that the decision to award a penalty was the correct one.

“We sat here, we watched it and the way Kimpembe has gone up there, he’s left his arm out, he’s turned his back, he’s taken no responsibility for where that ball is striking, he’s made himself bigger,” Walton said on BT Sport.

“The VAR, a huge decision, that’s exactly why VAR has been brought into operation here, has got to make sure that a) the contact was inside the area so therefore he can then adjudicate on it as it’s a possible penalty kick.

“Kimpembe there, he’s just hung himself out.

“For me, that’s a handball. He hasn’t tried to get his arm out the way, he’s turned his back and hasn’t taken responsibility for his arm.

“It’s struck his arm, his arm is bigger and that’s a penalty kick.

“As the law is written at the moment, that’s handball.”