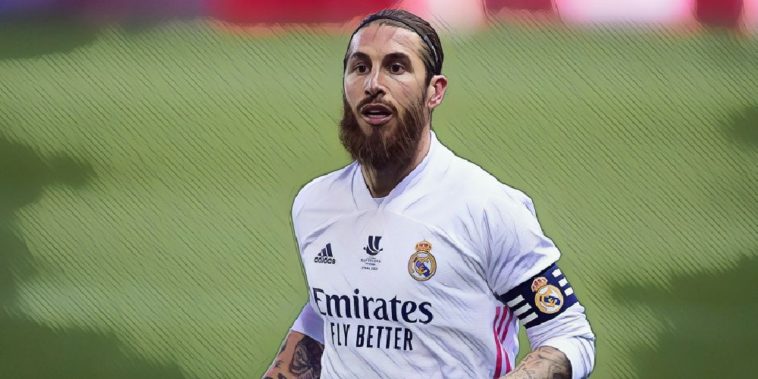 Sergio Ramos looks set leave Real Madrid this summer, with the player reportedly keen on a move to the Premier League and potentially Manchester United.

The Los Blancos captain has won a multitude of trophies since his arrival at the Bernabeu in 2005, the Spain international helping the club to five La Liga titles as well as a hugely impressive haul of four Champions League triumphs.

Despite his legendary status at the Bernabeu, however, Ramos continues to be linked with an exit from the club as he enters into the final six months of his existing contract.

According to the Mirror, the player is ready to snub any new offer from Madrid and is instead targeting a move to England, with Manchester United his primary destination.

With his current deal set to expire this summer, he is now able to begin negotiations with sides around Europe and potentially seal a pre-contract agreement.

Zinedine Zidane’s side are seemingly unable to offer the Spaniard a suitable new two-year deal, with the cash strapped La Liga side having offered him a deal which would see him take a 10 per cent pay cut.

There had been rumours that Paris Saint-Germain were keen on bringing the defender to the Parc des Princes, although Ramos is said to be ‘unconvinced’ by the prospect of moving to the Ligue 1 side and prefers a move to the Premier League.

The likes of Liverpool, Manchester City and Everton have all been linked with the player, yet the report says that it is United who are said to be his first-choice destination.

Ramos was strongly linked with a move for the World Cup winning defender back in 2015, before he put pen to paper on a new five-year deal.

Ole Gunnar Solskjaer’s side are one of a handful of clubs who would be able to afford Ramos’ £200,000-a-week wage, with the signing of the defender a way of bolstering an often weak-looking defensive unit, while with a record of 100 goals in 668 games, he would also increase the Red Devils goalscoring output.

While at 34 he is nearing the end of his career, United haven’t been afraid to bring in veteran stars in recent years, with both Edinson Cavani and Zlatan Ibrahimovic arriving at Old Trafford despite being well into their thirties.