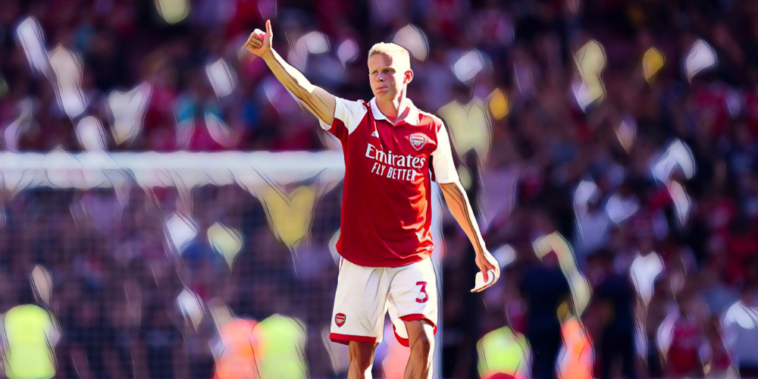 Oleksandr Zinchenko has made an immediate impact since joining Arsenal this summer, with the versatile full-back having settled swiftly into his new surroundings in north London.

Zinchenko’s arrival has provided Mikel Arteta with both a multi-functional talent and a serial winner, one who has helped the Gunners to the top of the early Premier League table with three consecutive wins.

Those wins mean Zinchenko – a four-time title winner at Manchester City – now boasts the best win percentage of all Premier League players to have played a minimum of 50 games.

Here are the top five.

Naby Keita has not quite lived up to expectations since swapping RB Leipzig for Liverpool, but the Guinea midfielder has been somewhat of a lucky charm across his four seasons at Anfield.

Keita has won 59/76 league appearances as a Liverpool player, giving the 27-year-old an impressive win rate of 77.6%.

The midfielder has struggled for consistent form, fitness and/or favour for much of his Premier League career however, and has been restricted to just 46 league starts since arriving in 2018.

He has contributed to a period of sustained success at Liverpool, but having entered the final 12 months of his deal faces an uncertain future beyond this season.

It takes a special talent to graduate from academy football into the current Manchester City side, but Phil Foden is certainly regarded as just that.

Foden has known little else but winning since emerging from City’s academy ranks, with the 22-year-old already the owner of four Premier League winners’ medals.

Foden recently celebrated a century of Premier League appearances for City and has won 79 of those fixtures in a period of domestic dominance for Pep Guardiola’s side.

His nine major honours is quite the collection for a footballer who could spend the next decade at the top of English football.

Aymeric Laporte edges out teammate Foden for third in these rankings, having won 81.5% of his Premier League fixtures at Manchester City.

Laporte signed for City in a £58m deal from Athletic Bilbao in January 2018 and has since been an integral figure at the heart of the champion’s defence.

The centre-back has won four Premier League titles, the FA Cup and three League Cup winners’ medals at City, with the prospect of more to come as Pep Guardiola’s side gear up for another successful season in 2021/22.

English football failed to see the very best of Arjen Robben, but his three seasons at Chelsea was a time of trophies, success and fleeting moments of brilliance that defined the next decade.

Robben signed from PSV Eindhoven in 2004, as Chelsea beat off competition from Manchester United to seal the signature of the Dutch winger.

He won back-to-back league titles across his first two seasons in west London, with Jose Mourinho’s team emerging as the division’s dominant force.

Injuries restricted Robben to just 67 league appearances for Chelsea, in which he scored 15 goals and laid on a further 16 assists. His wing partnership with Damien Duff was a feature of Chelsea’s title-winning teams under Mourinho, before Robben departed to sign for Real Madrid in 2007.

Zinchenko’s winning start at Arsenal has seen the Ukrainian move past Robben on this list, with his win percentage now standing at a staggering 82.3% after 79 league appearances.

The full-back was a valued member of Pep Guardiola’s title-winning machine at Manchester City, where he featured on both the left side of defence and in midfield.

He won 62/76 Premier League appearances in City colours, before completing a £32m move to Arsenal this summer where he reunited with former City coach Mikel Arteta.

Zinchenko now has the BEST win percentage of any player in Premier League history with 50+ appearances 👏 pic.twitter.com/JoEkyr6USw

Zinchenko has impressed in the season’s opening weeks as Arsenal have moved top of the division, with hopes high that the Gunners can end their Champions League exile with a top-four finish this season.