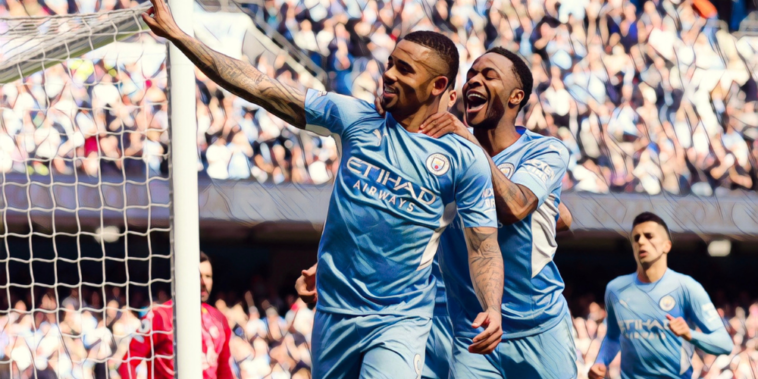 Pep Guardiola has overhauled his attacking options at Manchester City this summer, bringing in both Erling Haaland and Julian Alvarez to increase the firepower at his disposal at the Etihad.

The consequences of those arrivals are notable names leaving the club, with Gabriel Jesus on the verge of a move to Arsenal and Raheem Sterling linked with an exit to Chelsea.

That duo have been valuable contributors to the City cause under Guardiola’s management, but will hope for more prominent roles should their departures from the Premier League champions materialise.

Following those changes at City, we’ve decided to rank the five players who have contributed the most combined goals and assists for Pep Guardiola teams.

Jesus ranks fifth among the most prolific contributors of Pep Guardiola’s managerial career, having provided 136 goals and assists since signing for Manchester City in 2017.

The Brazilian arrived with the hope he could succeed Sergo Aguero as City’s goalscoring talisman, but has failed to develop as hoped and has struggled for regular opportunities at the Etihad.

However, the 25-year-old has managed an impressive 95 goals from just 151 starts for the club, adding a further 41 assists in the process.

Jesus – who has won four Premier League titles in five-and-a-half seasons at the Etihad – is on the verge of being announced an Arsenal player and will hope his move to north London can boost his hopes of a starting place for Brazil at the World Cup in November.

Aguero reached 20+ league goals in three consecutive Premier League campaigns under Guardiola, while he helped the side to three league titles across that period before his exit to Barcelona in 2021.

The Argentina international’s role reduced during his latter period working under Guardiola, as fitness problems and an evolving style at City saw his status diminish.

He did, however, depart the club as their record goalscorer with 260 in all competitions, whilst his 184 Premier League goals make Aguero the highest-scoring overseas player in the division’s history.

Kevin De Bruyne has been directly involved in 175 goals for Manchester City since Guardiola’s appointment in 2016, with the Belgium midfielder among world football’s best creative talents.

De Bruyne is a two-time winner of the PFA Player of the Year award and has won City’s Player of the Season accolade on a joint-record four occasions, setting new standards for goal creation.

He has climbed to joint-eighth in the Premier League’s all-time assist chart with 86 in 210 games and his average of 0.41 assists per game is comfortably the highest of any player inside the top 10.

Raheem Sterling looks set to leave Manchester City this summer after a reduced role last term, with Chelsea interested in a deal for the England international.

Sterling was a notable omission from the starting side for several big fixtures last season and is keen to earn a more prominent position should he leave the Etihad.

Guardiola will be losing a reliable source of goals should Sterling depart this summer, with the 27-year-old having provided 186 goals and assists across the past six seasons.

He was named as the FWA Footballer of the Year in 2018/19, before producing the best goalscoring campaign of his career the following season with 32 goals in all competitions.

It is the kind or record that has made Sterling a top target for Thomas Tuchel and Chelsea.

It will come as little surprise to see Lionel Messi top these rankings, having enjoyed the peak seasons of a record-breaking career under Guardiola’s guidance at Barcelona.

Messi scored a stunning 211 goals in just 219 games under Guardiola, adding a further 80 assists in the process.

The height of their time in tandem came during the 2011/12 campaign, in which Messi became the top goalscorer in Barcelona’s history at just 24 years old.

#OnThisDay back in 2012, Messi made us wonder if he comes from the same planet as us. 👽💫#LaLigaHistory pic.twitter.com/6EhiT3Lyik