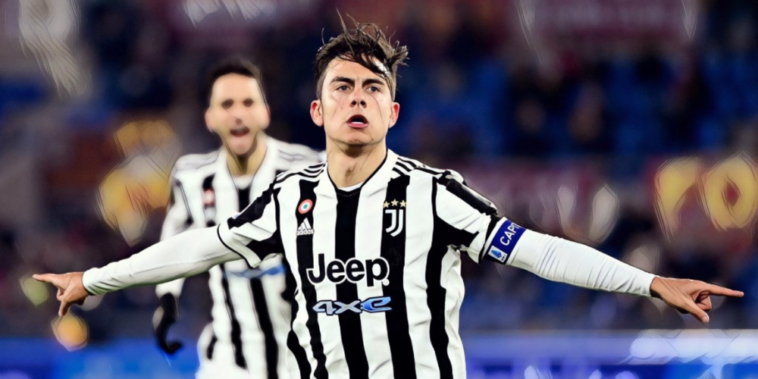 Paulo Dybala is set to leave Juventus on a free transfer this summer, after the forward failed to agree terms on a new contract with the Italian giants.

The announcement on Dybala’s exit will spark a scramble for his signature among Europe’s top clubs, with the 28-year-old having scored 113 goals in 283 appearances for Juventus.

Dybala had been expected to agree a new deal with the Bianconeri, but there will now be a number of sides interested in signing one of this summer’s most high-profile free agents.

So for those of you who like to follow the latest soccer betting odds, we’ve decided to look at the bookmakers’ five favourites to sign the Argentina international.

Paris Saint-Germain will target attacking additions this summer, given the expectation that Kylian Mbappe will leave for Real Madrid on a free transfer.

Dybala would represent a high-quality addition to the club’s forward ranks and could become the latest free transfer addition in Paris, following the signings of Lionel Messi, Gianluigi Donnarumma, Sergio Ramos and Georgino Wijnaldum last summer.

Dybala’s defensive contribution would aid a PSG side that has become unbalanced amid superstar signings, but question marks remain over whether the 28-year-old can compliment Messi.

The forward has struggled to command a regular role with Argentina – scoring just twice and starting in only 16 of his 32 appearances for La Albiceleste – with suggestions Dybala and Messi prefer to operate in similar areas of the pitch.

Arsenal are in the market for at least two new forwards during the summer transfer window, with both Alexandre Lacazette and Eddie Nketiah out of contract this summer.

Pierre-Emerick Aubameyang was also allowed to depart in January and there will be an overhaul of attacking options at the Emirates this summer, which could include the arrival of Dybala.

The Argentine’s technical talents would appear well-suited to the demands of Arteta’s side and the Gunners could be tempted by the chance to coax the best from a player who won Serie A’s Most Valuable Player award in 2019/20.

Dybala – nicknamed “La Joya” (The Jewell) – has lost his sparkle amid fitness issues in recent campaigns but at 28 has time to rediscover his creative best in a new environment.

Inter Milan emerged as early favourites to sign Dybala from Juventus, in a deal that would represent a blow to the Bianconeri’s supporters.

Inter were crowned as champions of Italy last season to end Juventus’ dominance of the division and the arrival of a key figure from their fierce rivals would strengthen the Nerazzurri ahead of next season.

Simone Inzaghi’s side have shown a willingness to capitalise on contract situations at rivals clubs in recent windows, with Hakan Calhanoglu having shone since his shock free transfer arrival from AC Milan last summer.

Atletico Madrid were reportedly interested in a deal for Dybala last summer and could renew their interest with Luis Suarez expected to depart the Spanish capital at the end of the season.

The move to Madrid would provide Dybala with the chance to compete under compatriot Diego Simeone, in a side which are Champions League regulars and the biggest threat to Spanish football’s biggest two clubs.

Atletico won the La Liga title last season but have struggled to replicate that form this season, though are on course to secure a top four finish and Champions League football.

Dybala could be an ideal addition to the side as Atletico gear up for another title challenge, adding to a collection of creatives that already includes Antoine Griezmann and Joao Felix.

Tottenham are the 4/1 favourites to sign Dybala this summer, having previously been linked with a move to sign the forward in 2019.

Antonio Conte had been interested in signing a forward during the January transfer window and Dybala could be an ideal target for the North Londoners, given his comfortability operating in a number of advanced positions.

The 28-year-old’s best football has come as a support striker, but he is also capable of performing from the right or as a more traditional centre-forward and would add goals and guile to a Spurs side reliant on Harry Kane and Son Heung-Min.

Dybala could also take note of how former Juventus teammates Rodrigo Bentancur and Dejan Kulusevski have settled at Spurs since winter window moves to the Premier League, whilst the presence of Fabio Paratici in North London – the former Chief Football Officer in Turin – could also prove persuasive.