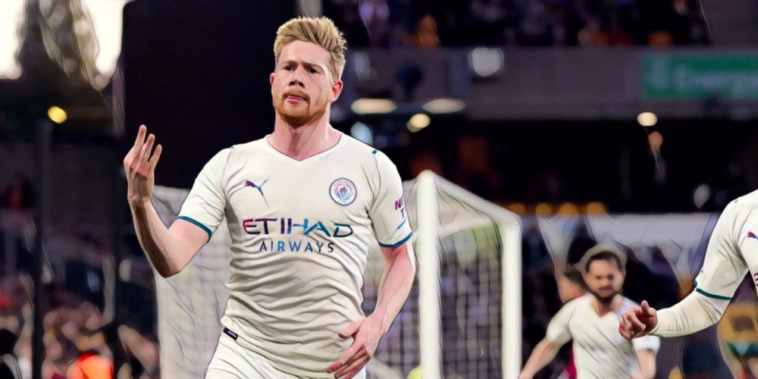 De Bruyne had never previously scored a Premier League hat-trick before his four-goal display at Molineux, which included the Belgian claiming the match ball inside the opening 23 minutes.

The 30-year-old’s treble is among the fastest hat-tricks the division has seen and following his sensational showing we’ve ranked the five earliest hat-tricks – from kick-off to third goal – in Premier League history.

Ian Marshall scored Leicester’s first ever Premier League hat-trick in quick-fire fashion, scoring three goals inside the opening half an hour as the Foxes won 4-2 in an entertaining Midlands clash with Derby.

Martin O’Neill’s team had fallen behind inside two minutes after Dean Sturridge scored via a huge deflection, before Marshall levelled the scores with an instinctive volley just five minutes later.

The experienced forward capitalised on a goalkeeping mistake to put Leicester ahead on 24 minutes and added a third moments later after turning home Steve Claridge’s cross to double the home side’s advantage.

Jermaine Pennant enjoyed a Premier League debut to remember after being handed his first appearance for Arsenal in 2003.

The winger had become English football’s most expensive trainee when signing for the Gunners from Notts County in a £2m deal four years earlier, but had to be patient for his Premier League chance.

He seized it in some style as the North Londoners thrashed Southampton 6-1 at Highbury, marking his top-flight debut with a hat-trick inside just 26 minutes.

Only once have 2️⃣ players bagged hat-tricks for the same team in a single #PL match #1in10000 pic.twitter.com/9alobOoiBh

Robert Pires also helped himself to a hat-trick in the clash, the first and only time two teammates have both scored trebles in a Premier League fixture.

Despite his impressive debut, Pennant failed to make the grade at Arsenal and later had spells at clubs such as Birmingham, Liverpool and Stoke.

De Bruyne’s treble against Wolves is the third-earliest Premier League hat-trick, as Manchester City ran riot across the opening exchanges to thrash Bruno Lage’s side.

The trip to Molineux had been billed as a potential banana skin for Pep Guardiola’s title-chasing team, but De Bruyne’s magnificent performance helped seal an emphatic win.

The Belgium international ghosted forward to lash home a first on seven minutes, before turning in a deflected second after Leander Dendoncker had equalised for Wolves.

His third was a thing of beauty as he rifled in a rocket from the edge of the area, with each of his three goals having come from his ‘weaker’ left side.

De Bruyne added a fourth goal in the second period to become just the third Premier League midfielder to score four times in a single game, his performance securing a win that moves City three points clear of Liverpool ahead of the season’s penultimate fixtures.

Manchester United-Arsenal was the Premier League’s definitive rivalry at the turn of the millennium, the two teams sharing the title across eight straight seasons between 1997 and 2004.

The two were often embroiled in tight title races, but the 2000/01 campaign saw United thrash their nearest challengers 6-1 on their way to a third consecutive championship.

Arsenal were blown away in a memorable performance from the Red Devils at Old Trafford, with Dwight Yorke helping himself to a 22-minute hat-trick.

A #PLMoment that will live long in the memory of @ManUtd fans pic.twitter.com/ofMhirgYzL

Yorke opened the scoring on three minutes before a Thierry Henry equaliser, but added two further goals to put the home side in cruise control.

Roy Keane and Ole Gunnar Solskjaer scored before half-time to make it 5-1 to the Red Devils, who ended the clash with six goals to move 16 points clear at the top of the division.

Sadio Mane holds the record for both the fastest and earliest hat-trick in Premier League history, having scored a stunning treble during Southampton’s 6-1 humiliation of Aston Villa at St Mary’s during the 2014/15 season.

Mane put the Saints 3-0 ahead after just 16 minutes, whilst his three goals came just two minutes and 56 seconds apart as the Senegalese forward stunned a shell-shocked Villa defence.

Mane bundled in a first goal before netting a second moments later, capitalising on a poor back-pass from Ron Vlaar to double Southampton’s lead.

Sadio Mane made history by netting the fastest #PL hat-trick, #OnThisDay in 2015 pic.twitter.com/WoucAqq2kn

His third goal was the pick of the bunch, side-footing an emphatic finish into the top corner after Shane Long’s cut-back.

Mane’s treble eclipsed Robbie Fowler’s three goals against Arsenal in 1994, with the former Liverpool forward having scored a hat-trick in just four minutes 33 seconds – a record many felt may never be beaten.