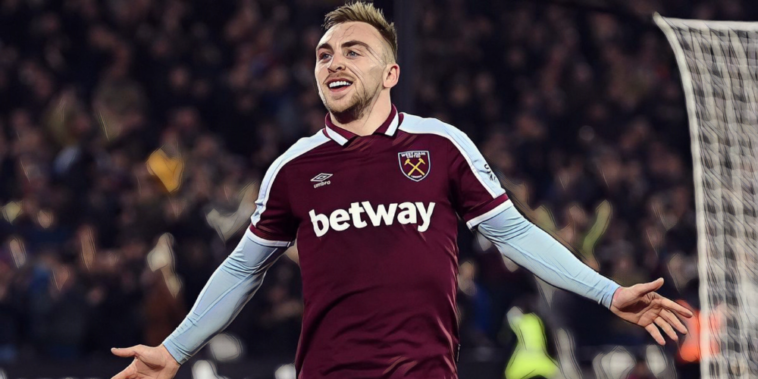 Gareth Southgate boasts an embarrassment of riches as he prepares England for the World Cup later this year, the 2021/22 season having seen a number of Premier League names stake their claim for involvement in Qatar.

The uncapped Jarrod Bowen is the latest to hit a fine fun of form and move into Three Lions’ contention with the winger continuing his impressive campaign with a double in West Ham’s 2-0 win over Norwich on Wednesday evening.

Following Bowen’s brace we’ve decided to look at the most productive English players in the division so far this season, here are the six players with the most Premier League goals and assists.

Jamie Vardy called time on his international career with England in 2018, having played second-fiddle to Harry Kane for much of his involvement with the Three Lions.

Vardy’s decision was part based on a desire to extend his career with Leicester and the Foxes have reaped the benefits of that decision with the 35-year-old remaining one of the Premier League’s most dangerous forwards.

Having won the division’s Golden Boot during the 2019/20 season, the Foxes’ forward has continued to score goals at the highest level and has nine for the season so far, a haul bettered by only Liverpool duo Mohamed Salah and Diogo Jota.

Vardy has also registered one assist with the veteran having provided 10 goal involvements in 15 league starts for Leicester this season. Ruled out for the next two months through injury, his absence will be a major blow to Brendan Rodgers’ side.

Bukayo Saka has formed part of an exciting Arsenal forward line this season, with the Gunners having been reliant on their collection of prospects during the current campaign.

Saka enjoyed an excellent Euro 2020 with England and has continued on his upward trajectory this term, scoring six goals and providing four assists in the Premier League.

⏎ The turn and pass from Nuno
🌶 The finish from Saka

The 20-year-old has featured in multiple positions for Arsenal but has settled on the right-wing for much of the current season, drifting inside dangerously to link with the likes of Martin Odegaard and Emile Smith Rowe.

Arsenal’s young side has shown promise since a difficult start to the season and Saka will be central to their hopes of a top-four finish and Champions League qualification.

Emile Smith Rowe has matched the 10 goal involvements of club teammate Saka, with the midfielder Arsenal’s leading scorer in the Premier League this season.

Smith Rowe has scored eight league goals for the campaign, including a run of three consecutive goalscoring appearances as a substitute during the festive period.

The 20-year-old also scored on his first start for England during November’s international break, scoring the seventh in the Three Lions’ 10-0 thrashing of San Marino as he bids to earn regular involvement in Gareth Southgate’s plans.

He has averaged goal or assist every 120 minutes on average for Arsenal this season and is part of a new generation of attacking technical midfielders that has provided England with huge strength in depth.

Trent Alexander-Arnold has returned to his creative best once again this season, with the Liverpool right-back remarkably third amongst all English players for goal involvements this season.

Alexander-Arnold leads the Premier League for assists (9 – joint with Mohamed Salah) and also tops the charts for a number of metrics, including crosses, key passes, through balls, shot-creating actions and expected assists.

Trent Alexander-Arnold in the Premier League so far this season:

The 23-year-old is now one assist short of reaching double figures for the third time in four seasons, an incredible rate of productivity for a full-back as Alexander-Arnold continues to set the attacking standard amongst defenders.

Mason Mount has already matched his most productive season in the Premier League, having provided 12 goal involvements for Chelsea in 2021/22.

Mount has scored seven goals – including a first senior hat-trick against Norwich in October – and provided five assists, with no English player having been directly involved in more goals so far this season.

The 22-year-old has been amongst the west London side’s most consistent performers and leads the club’s ranking for Premier League goal involvement, ahead of Reece James (9), Mateo Kovacic (7) and Jorginho (7).

Ranked alongside Mount at the top of the charts is Jarrod Bowen, the winger’s double against Norwich in midweek moving him to 12 goal involvements for the season.

Bowen has been in brilliant form in recent weeks as West Ham push towards a place in next season’s Champions League, with the 25-year-old having scored two goals and provided four assists in his past four league appearances.

Bowen’s performances have seen the Hammer’s winger tipped with a call-up to the England squad, in what would cap a remarkable rise for a player whose senior career began with non-league Hereford United during the 2013/14 season.

Jarrod Bowen has been in fine form for West Ham this season:

His statistics are even more impressive when all competitions are included with his 18 goal involvements more than Harry Kane (14), James Maddison (14), Phil Foden (13) and Jude Bellingham (13).

If he can maintain this level of performance he should be in line for selection when England next regroup at St George’s Park.