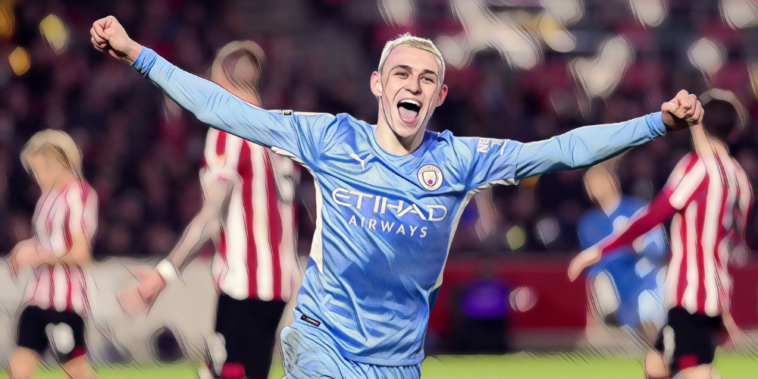 Manchester City celebrated the New Year as Premier League leaders, the defending champions having opened up a healthy lead as the top of the table heading into 2022.

City have won three of the past four Premier League titles and are favourites to retain the title once again this season, with Liverpool and Chelsea amongst the sides hoping to catch up to Pep Guardiola’s side.

As we prepare for the second half of the season, we’ve looked at the biggest ever Premier League points gaps between first and second heading into New Year.

Manchester United led the title race by eight points at the turn of the year in 2000/01, as the Red Devils marched towards a third consecutive Premier League title.

Sir Alex Ferguson’s side had won a historic treble two seasons earlier before winning the Premier League by a then-record margin the following season, with 2000/01 proving another campaign in which United were clear of the chasing pack.

United won eight consecutive fixtures between October and December to open up their advantage, losing just twice before the turn of the New Year.

Ferguson’s side went on to win the title by a 10-point margin from runners-up Arsenal, even after losing each of their final three fixtures with the championship already assured. Their coronation as champions on April 14 remains the earliest date a side has won the Premier League.

Pep Guardiola’s side have once again been the side to beat in the Premier League this season, losing just twice for the campaign to date and are currently in the midst of a 11-game winning streak.

Manchester City won 53 matches in all competitions during 2021 💪

That's the most any English league club has managed in a single year since the creation of the Football League in 1888 🤯 pic.twitter.com/cFbYje3mOM

Pre-season concerns over the club’s failure to sign a centre-forward have been forgotten, their winning sequence having included emphatic wins over Leeds (7-0), Newcastle (4-0) and Leicester (6-3).

Third-place Liverpool can close the gap to six points with a win in their game in hand, but City remain the side to beat in the 2021/22 title race.

Having ended Chelsea’s 50-year wait for a league title during his first season, Jose Mourinho led the west Londoners to back-to-back Premier League crowns in 2005/06.

There was no stopping the Blues who raced out of the traps, winning each of their opening nine league games and keeping clean sheets in the first six of those fixtures.

Chelsea enjoyed the strongest ever start to a title defence in the Premier League era after winning 20 of their first 22 games of the campaign, an almost flawless first half of the season resulting in an 11-point advantage on New Year’s Day.

Mourinho’s side finished eight points clear of Manchester United at the end of the season.

Liverpool ended a three-decade wait for the league title in stunning fashion in 2019/20, enjoying the best-ever start to a season in Europe’s top five leagues after taking 61 points from their first 63 available.

The Reds’ near-perfect start saw Jurgen Klopp’s side 13-points clear at the turn of the New Year, whilst the club also set numerous records over the course of the season, including the biggest ever point lead at any time at the top of the division (25).

Liverpool also equalled records for the most wins (32), most home wins (18), and the most consecutive wins (18) as the Merseysiders won the title with a club-record haul of 99 points, having been narrowly beaten to the title by Manchester City the previous season.

Manchester City’s 2017/18 season remains the benchmark in English football history, as Pep Guardiola’s side became the first team to reach 100 points in a season.

City’s Centurions were 14 points clear as 2018 began and ended the season as champions by a record winning margin of 19 points, having broken new records for most wins (32), most goals (106), best goal difference (+79) and most consecutive victories (18).

Sergio Aguero led the way for City with 21 league goals scored, as Guardiola’s second season in charge proved one of the most memorable in the club’s history.

Manchester United ended the season as runners-up, but were closer to sixth-place Arsenal than the runaway champions, who established themselves as one of the Premier League’s greatest ever sides with a season of spellbinding football.

Sir Alex Ferguson’s side had ended a 26-year wait for the title during the 1992/93 season and established themselves as England’s dominant force the following campaign, racing into a lead after losing just once before March.

United lost just one of their opening 29 games – a 1-0 defeat at Chelsea – to sit 14 clear as 1994 began, cantering towards a second successive league title with Blackburn Rovers finishing the season a distant eight points behind.

Eric Cantona was named as the PFA Player of the Year after scoring 25 goals in all competitions, as United led the title race from the fourth game onwards and ended the season as domestic double winners after beating Chelsea in the FA Cup final.