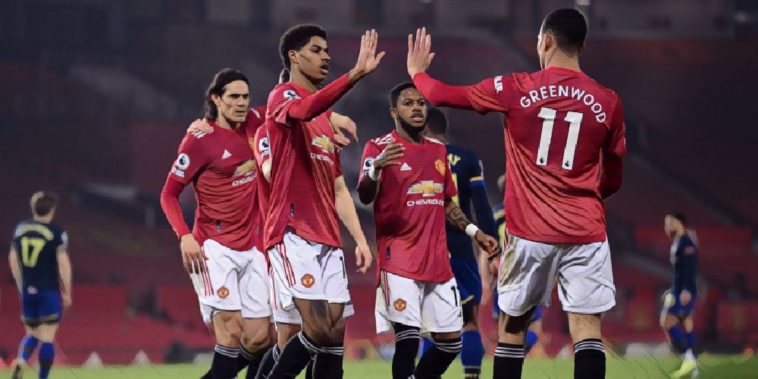 The last campaign saw Manchester City net a mightily impressive 102 league goals, just four shy of their own record tally from the 2017/18 season, while runaway champions Liverpool bagged 85 goals proving that, as Sir Alex Ferguson claimed, while goals may win games it really is defence that wins titles.

That point has been rubber-stamped this term as Pep Guardiola’s side look set to claim a third title in just four seasons despite not being at their free-flowing best in attack, with their newfound defensive resilience proving the difference as they’ve conceded just 24 league goals thus far.

While they’ve been so stubborn at the back, have the league leaders really been that below-par in attack? Well, let’s take a look at the five highest scoring teams in the Premier League so far this season:

After the highs of clinching a first league title in 30 years last season the current campaign has been hugely disappointing for Jurgen Klopp’s men, the champions currently facing the previously unthinkable prospect of missing out on Champions League football next term.

That sharp decline has largely been the result of a torrid 2021, particularly at Anfield, the Reds having topped the table at the end of the last calendar year as City struggled to get going, before suffering a real drop off.

Despite initially coping in the absence of Virgil van Dijk and Joe Gomez at the back, Klopp’s side began to fall apart at the turn of the year, losing six straight home league games in a row for the first time in their history, before finally ending that hoodoo against Aston Villa earlier this month.

While their defensive woes have been apparent, at the other end of the pitch they have also been uncharacteristically wasteful. The likes of Sadio Mane and Roberto Firmino have struggled to catch fire, with Mohamed Salah largely to thank for their place on this list, the Egyptian having hit 20 league goals so far this season, the third time he has reached that landmark in a Liverpool shirt.

The former Chelsea man netted a hat-trick in the thrilling opening day encounter against newly-promoted Leeds United, while he also bagged a brace in the 7-0 thrashing of Crystal Palace back in December, a result that at the time looked to be a marker of a side on course for back-to-back title triumphs. How things can change.

While Liverpool may largely have Salah to thank for bolstering their goalscoring numbers, Spurs are even more dependent on two of their star assets, the dynamic duo of Harry Kane and Heung-Min Son having fired 36 of Spurs’ 56 league goals so far this season.

The England captain has netted 21 of those, as well as supplying a further 13 assists – nine of which were to his Korean teammate – the two men combining to lethal effect in the 5-2 win over Southampton earlier this season, as well as playing key roles in the 6-1 thrashing of Man United at Old Trafford back in October.

In truth, those two superstars are almost solely responsible for keeping the club in contention for a top four spot in what’s been a pretty dismal campaign otherwise, the north London side suffering an embarrassing exit from the Europa League, as well as seeing their 13-year wait for silverware go on as they slipped to a 1-0 defeat to Manchester City in the Carabao Cup at the weekend.

The former Spurs academy graduate now has five games to try and rectify the club’s season and secure a top-four spot, although he will not be helped by continued speculation over the future of main man Kane, the 27-year-old recently outlining his desire to win major honours, something he is yet to do.

After a high profile collapse in the second-half of last season that saw them inexplicably squander a top-four spot, the Foxes have kicked on again this term, with it looking more and more likely that they will be playing Champions League football next season.

Such a strong campaign is testament to the work done by manager Brendan Rodgers, the former Liverpool boss having worked wonders since his arrival at the club from Celtic back in February 2019.

The Northern Irishman’s attractive and effective brand of football has brought the best out of an exciting crop of young talent at the King Power Stadium, the likes of Harvey Barnes, James Maddison and Youri Tielemans all thriving in the top tier, while former Manchester City man Kelechi Iheanacho looks to be finally showcasing his undoubted talents.

The pacy forward had been on the fringes in recent seasons yet has stolen the limelight of late, the Nigerian international currently the side’s top scorer with 17 goals in all competitions, with 10 of those having come in the league, including a superb hat-trick in the 5-0 demolition of bottom side Sheffield United.

After years of reliance on veteran striker Jamie Vardy – who’s netted a respectable 13 league goals – the Foxes finally look to have found someone to shoulder the burden, while both Barnes and Maddison have also chipped in with nine and eight league goals, respectively.

The side above the Foxes on this list and currently in the league table is Manchester United, the Red Devils having been the best of the rest this season behind runaway leaders Man City.

Following the securing a third-place finish last season, Ole Gunnar Solskjaer’s men look set to go one better this term, with back-to-back top-four finishes on the cards for the first time since 2013.

While the Norwegian deserves great credit for his role in that revival, much of the praise must fall upon star man Bruno Fernandes, the Portugal international having been instrumental since his arrival in January 2020 from Sporting CP.

After finishing the 2019/20 campaign with eight league goals in just 14 games, the talismanic midfielder has been just as lethal this term and is currently the club’s top goalscorer ahead of Marcus Rashford, having netted 24 goals across all competitions, including 16 in the league.

That impressive tally has somewhat helped cover for the lack of a real reliable presence up front, with Anthony Martial struggling for form and fitness this term, while veteran marksmen Edinson Cavani has only recently reached double figures in all competitions.

That being said, United have still been involved in some high-scoring games this season, including putting six past Leeds United at Old Trafford, as well as romping to a record-equalling 9-0 win over Southampton.

They might not quite have been at their brilliant, lethal best in attack this season, yet they still look set to come out on top in the scoring charts, as well as in the title race.

While all the talk has been about their improved defensive record and the impact of summer signing Ruben Dias, they have quite clearly still been effective in attack, even without deploying a recognised centre-forward for much of the campaign.

That absence of an out-and-out number nine has seen the goals more evenly spread, the likes of Raheem Sterling and Riyad Mahrez both chipping in with nine league goals, while surprise package Ilkay Gundogan currently leads the way for City as the club’s top goalscorer with 16 in all competitions, including 12 in the Premier League.

Although they are currently well below their record tally of 106 goals in a season, they’ve still dished out their fair share of thrashings, including picking up 5-0 victories against both West Brom and Burnley, the latter of whom fell to a fourth successive Etihad defeat of the same scoreline.

Amid rumours of a potential striking addition this summer, potentially Borussia Dortmund star Erling Haaland, the rest of the top-flight should be very worried next season, particularly if they can maintain their current defensive prowess.