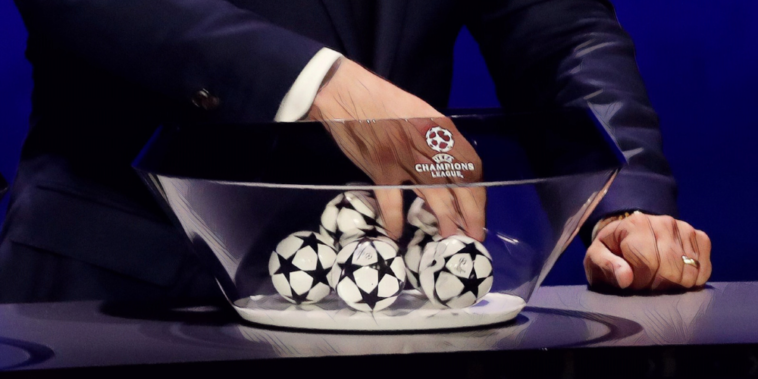 Europe’s leading clubs have learned their opposition for the UEFA Champions League’s first knockout round, following the draw for the competition’s last 16.

Four Premier League sides remain involved in this season’s competition, with the English quartet amongst the favourites to be crowned European champions in 2021/22.

Manchester City, Liverpool and Manchester United were all seeded after each finished as group winners, though Chelsea were seeded second in their defence of the trophy after finishing as runners-up to Juventus in Group H.

Following the last-16 draw, we rank the ties in terms of entertainment ahead of the Champions League’s return in February.

Juventus’ reward for securing qualification as group winners is a last-16 tie with Villarreal, in what will be the first ever meeting between the two teams in European competition.

The Italian side have struggled domestically this season and are currently eighth in Serie A, though the Bianconeri have performed better in Europe to top the group – a 4-0 thrashing at Chelsea aside.

🇪🇺 Champions League Round of 16 Draw

Their opponents, Villarreal, possess an experienced European manager in Unai Emery and the four-time Europa League winner hopeful of making an impression in the Champions League this season.

The Spaniards are also struggling domestically, however, languishing 13th in La Liga after winning just four league games so far this season.

Both sides will view this as a winnable tie, though neither are expected to reach the latter stages.

RB Salzburg became the first Austrian side to reach the Champions League’s knockout stages, though face a daunting challenge to progress further after being handed a last-16 meeting with Bayern Munich.

Salzburg possess an exciting collection of young talent, but will be major underdogs against a Bayern side who reached this stage with a perfect group stage record and a tournament-leading 22 goals scored.

Perhaps the most intriguing sub-plot of the tie is teenage sensation Karim Adeyemi taking on the Bundesliga’s dominant force, the 19-year-old having made his senior debut for Germany earlier this year after impressing at Salzburg.

Adeyemi – a boyhood fan of the Bavarians – spent time with Bayern in the academy system, but was released before taking an unorthodox route to prominence.

He has scored four goals in five Champions League appearances this season and Salzburg will hope to keep him out of the clutches of interested sides in January, as the likes of Borussia Dortmund and Liverpool monitor his progress.

Manchester City’s bid to reach a second successive final will see the Premier League champions face Sporting Lisbon in the last-16, the latter having recovered from a shaky start to reach the knockout stages.

Sporting lost each of their opening two fixtures, but responded to finish as runners-up to Ajax and reach the last 16 for the first time since the 2008/09 season.

Sporting ended a two decade wait for a Portuguese league title last season and will look to Pedro Goncalves for inspiration, the midfielder having attracted the attention of Europe’s elite following a prolific period in Lisbon.

The 23-year-old has four goals and two assists from four Champions League appearances this season, but City – the bookmakers’ favourites to end their wait for European success this season – should prove too strong for Sporting.

Chelsea will have been pleased with their last-16 draw against Lille, having avoided the likes of Bayern Munich and Real Madrid.

Unseeded for the draw, the holders will face the French champions in the next round, with Lille having topped the tournament’s most straightforward group ahead of Salzburg, Sevilla and Wolfsburg.

Chelsea 🆚 Lille in the Champions League

Lille have talent at their disposal with Jonathan David having enjoyed an excellent start to the campaign, scoring 14 goals across all competitions despite his side’s struggles – the defending champions currently 11th in Ligue 1.

Chelsea will be confident of progression as the west Londoners bid to become just the second side to defend the trophy and few will be anticipating an upset.

Arguably the tournament’s dark horses, there will be many eager to watch Ajax’s performances in the knockout rounds after a flawless group stage campaign for Erik ten Hag’s side.

Ajax became just the second side from outside Europe’s top-five leagues to qualify with a 100% record, whilst the Dutch champions boasting the competition’s leading scorer in Sebastien Haller.

Edwin van der Sar explains how difficult it is for Ajax to compete with some of the biggest clubs in Europe 👀 pic.twitter.com/WmPVLJFZzB

Haller has enjoyed a record-breaking first season at this level, becoming just the fourth player – after Cristiano Ronaldo, Lionel Messi and Robert Lewandowski – to score 10+ goals in a group stage campaign and the first to score in each of his first six Champions League appearances.

Benfica finished ahead of Barcelona to reach this stage, but were beaten convincingly in both meetings with Bayern Munich and progressed with a negative goal difference.

The Portuguese side may not be the real acid test of Ajax’s credentials to reach the latter rounds, but Ten Hag’s team are one of the competition’s most watchable sides.

Liverpool will visit the San Siro for the second time in this season’s competition, having already faced AC Milan during the group stages.

Jurgen Klopp’s team take on city rivals Inter Milan in the last 16, with the Italian champions reaching this stage for the first time in a decade.

Inter’s first league title since 2010 was followed with a sale of leading talent last summer, the likes of Romelu Lukaku and Achraf Hakimi departing to ease the financial pressure on the Nerazzurri.

Fernando Torres was something else! 🌟 pic.twitter.com/lnCLPYIGOp

Despite those sales the club have remained competitive and lead the Serie A title race at present, but Italian football – and Inter – remain a level behind Europe’s elite and Liverpool will start as clear favourites.

That said, Simeone Inzaghi’s side will prove testing opposition and the clash – just the third meeting between the teams – is an early glamour tie between two of Europe’s biggest clubs.

It seemed inevitable that Atletico Madrid would face Manchester United following the last-16 re-draw, a mistake having seen the two sides kept apart during the initial ceremony.

The clash will see a fascinating clash of styles between Ralf Rangnick and Diego Simeone, two coaches with clear and unwavering ideologies over how their sides set up.

Atletico are not the defensive force of old but retain a core of world-class talent, most notably Jan Oblak in goal, whilst Luis Suarez will relish his chance to be the pantomime villain at Old Trafford once again.

Cristiano Ronaldo – so often the scourge of Atletico during his time at Real Madrid – will be looking forward to a return to the Spanish capital, in what will be just the second tie between the sides and first since a two-legged European Cup Winners’ Cup clash in 1991.

Strong cases can be made for either side’s progression, which should amount to an evenly-matched last-16 tie.

Real Madrid were the major losers from the Champions League’s re-draw, having been handed a difficult task with a last-16 clash against Paris Saint-Germain.

PSG remain unconvincing, but any side with Lionel Messi, Neymar and Kylian Mbappe in their ranks has the potential to explode in any given fixture.

Mauricio Pochettino will hope to fine-tune the balance of his side ahead of the knockout rounds, as PSG go in search of a maiden European title after finishing as runners-up in 2020.

Sergio Ramos is ready to die for PSG when they face Real Madrid 😤 pic.twitter.com/Ktytpu4uTh

Real Madrid are the record 13-time winners and present a formidable obstacle to those hopes, having established themselves as leaders in the La Liga title race.

The return of Sergio Ramos to the Bernabeu makes an intriguing sub-plot, as does the future of Kylian Mbappe who is expected to leave PSG and sign for Real Madrid on a free transfer next summer.