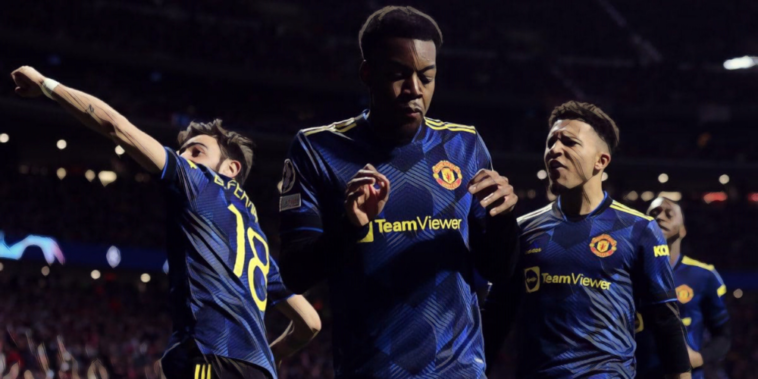 Ralf Rangnick has admitted his shock at Manchester United’s first half performance against Atletico Madrid, after Anthony Elanga came off the bench to rescue a result in the first leg of their Champions League last-16 tie.

The teenager continued his rise under Ralf Rangnick with a crucial equaliser in the 1-1 draw in the Spanish capital, netting just five minutes after his introduction as a substitute with a composed finish beyond Jan Oblak.

Elanga’s goal saw him become the fifth youngest Champions League goalscorer in the Red Devils’ history – aged 19 years and 302 days – one which could prove vital to the club’s hopes of reaching the quarter-finals.

United were dominated for large periods and had conceded after just seven minutes at the Wanda Metropolitano, the impressive Joao Felix heading home a brilliant opener after stretching to meet Renan Lodi’s cross.

Atletico had conceded the majority of the possession to the visitors but were largely untroubled, a return to the defensive solidity that has been lacking this season but has largely defined the club during the Diego Simeone era.

The Spanish champions also twice hit the woodwork through Sime Vrsaljko and Antoine Griezmann before Elanga’s late equaliser, and speaking after the game Rangnick spoke on his disbelief at the lack of ‘conviction’ and ‘aggression’ from his side.

“I don’t know if I rescued it but after the performance in the first half, it could only get better,” he admitted to BT Sport. “What we played in the first half I still cannot believe. We played without conviction, without aggression and that is why we were struggling.

“Second half we did better, more possession in areas that mattered and if we played another 10 minutes we might have won the game. We have to play better in the first half, I was very disappointed by that performance in the first half.

Anthony Elanga with a MASSIVE goal for Man Utd!

“Against and with the ball we were far too apprehensive and did not take any risks. We only played it in our own half and then it is difficult against a team like Atletico. Their goal was difficult to defend, a brilliant cross and finish. We have to play with more conviction on the ball, we need more deep runs and the way we scored the goal was exactly that. This is how we have to play against them.”

Rangnick reserved praise for goalscorer Elanga, however, with the 19-year-old having followed his goal in the weekend win over Leeds with another important effort against Atletico.

The German said that the teenager should be a ‘role model’ for others in the squad and spoke on his delight at the winger’s development in recent months.

“He is playing as though it is a dream come true, it is a joy and fun to watch him play,” he said. “I wish a few other players would take him as an example and as a role model. Football is an important sport, even more so for the supporters, and it is a ball game. This is what I wish us to do especially in the second leg.”

Rangnick started the game with Victor Lindelof in an unfamiliar right-back role, the central defender struggling for much of the contest before his substitution.

Rangnick revealed his decision to field the Sweden international at full-back came with set-pieces in mind, but admitted his side’s performance improved after the introduction of Aaron Wan-Bissaka.

“To start with, [the idea was that] we could do with him in aerial duels, set-pieces, free-kicks for and against us. All three centre-halves were in good shape, but after seven minutes we were 1-0 down the plan was in the dustbin.

“I knew this was not his best position, and when we had Aaron Wan-Bissaka on the ball and Alex Telles, we had more possession and more assistance from the wings. In the end, due to the early goal it was difficult.

“In the second half we showed in quite a few moments how we have to play. It will be different at home in front of 75,000 fans and more conviction than we did in the first half.”