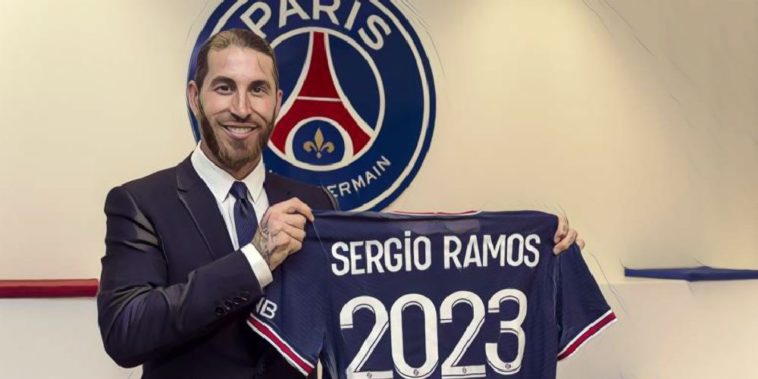 Sergio Ramos is said to have turned down lucrative contract offers from both Manchester City and Arsenal, before sealing his recent switch to Paris Saint-Germain.

The 35-year-old confirmed last month that he was set to call time on his 16-year stint at Real Madrid, after having failed to agree an extension to his existing deal at the Bernabeu.

That departure brings to an end a remarkable spell in the Spanish capital for the veteran defender, who played a pivotal role in helping the club to five La Liga titles and four Champions League’s – memorably netting a stoppage-time equaliser in the 2013/14 final against rivals Atletico Madrid.

Available on a free transfer, Ramos has since opted to join PSG on a two-year deal, leaving the La Liga giants having netted a remarkable 101 goals in all competitions, while he also captained the side for the last six seasons.

The likes of Manchester United and Chelsea were said to be interested in his services, while Goal report that he turned down offers from both Manchester City and Arsenal.

The report suggests that the Gunners were willing to offer him a two-year contract worth £15m per season, yet despite considering the offer, the Spain international ultimately rejected it due to the club’s lack of Champions League football.

As for Manchester City, they are also said to have offered him a deal until 2023, with the player then set to join New York City FC in the MLS for three years after that, the American club part of the City Football Group.

However, he has eventually agreed to a two-year deal worth up to £13m-a-season in Paris, with Madrid having been unwilling to match such an offer.

The report also adds that Ramos had been willing to accept a pay cut to stay with Los Blancos, yet after taking his time to consider the club’s proposal, he was informed that the offer had expired.

He will join former Liverpool man Gini Wijnaldum and wing-back Achraf Hakimi as part of an extensive summer of recruitment for the Ligue 1 side, while Italy ace Gianluigi Donnarumma is also expected to join the club on a free transfer.

Read – Opinion: Jack Grealish is world class, but Man City may not be the ideal home for him