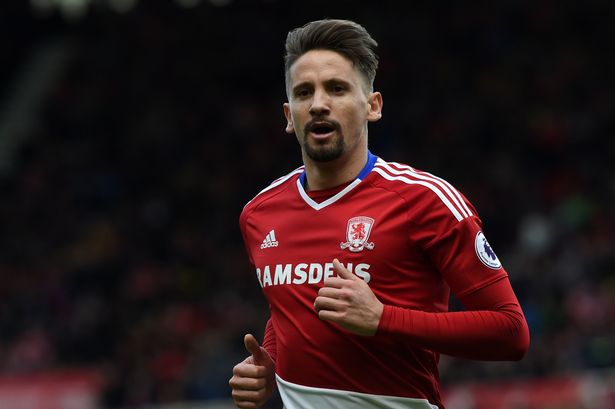 Middlesbrough’s Gaston Ramirez appears to be on the verge of a move to Serie A side Sampdoria.

According to Sky Sport Italia reporter Gianluca Di Marzio (@DiMarzio), a fee of €9m plus €2m in performance based add-ons will see the Uruguyan make the move back to Italy.

The former Bologna man first made the move to England back in 2012 when he signed for Southampton for around £12m. After an indifferent spell, which also took in a disappointing loan spell with Hull, he joined Middlesbrough on a six month loan deal in January 2016 which saw out the rest of his Saints contract.

Despite making a huge impact on Teesside, where he was arguably the catalyst for the North-East club’s charge to promotion in the 2015/16 season, the 26-year-olds relationship with the club and its fans has soured somewhat after a transfer request was rejected by the club during the January Transfer Window last season.

Reports of a £15m bid from then Premier League champions Leicester City appeared to have turned his head, however then the club were reluctant to let him leave believing he could help turn their season around. As it happened the then Boro boss Aitor Karanka, who had been keen to see Ramirez stay, subsequently parted company with the club as they drifted slowly towards relegation. It was Ramirez’s below par showings during the second half of the season, the worst of which came at Bournemouth where he was red-carded after just 20 minutes that irked the clubs supporters. In fact that was the last league game that Ramirez appeared in that season.

He’s featured regularly throughout pre-season, however the understanding is that he would be allowed to leave should a suitable offer come in. It would seem that Sampdoria have submitted such an offer, with the decision now down to Ramirez and whether he can agree personal terms. Real Betis tried and seemingly failed to convince him of a move there after an agreement on salary couldn’t be reached.

Nantes have also been credited with an interest. Claudio Ranieri, who was boss at Leicester when they tried to sign him, appears to still hold a keen interest in the player; however it now looks like he’ll be set to miss out on his man once more.