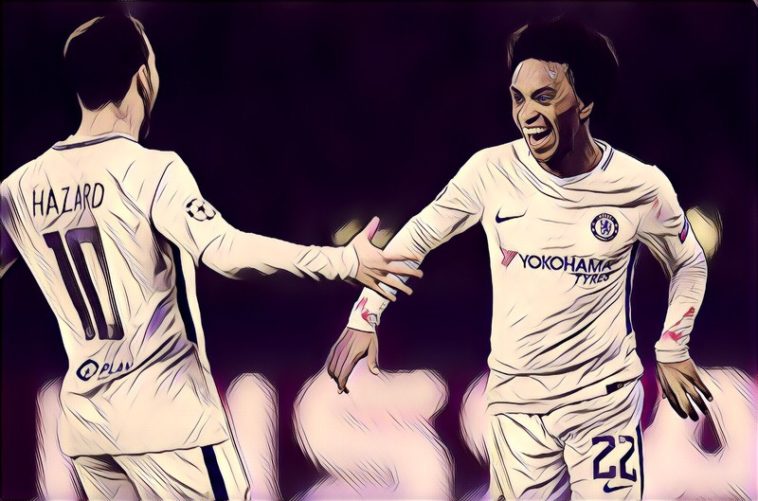 Chelsea secured their place in the last 16 of the Champions League with a comfortable 4-0 win over Qarabag. Here are five things we learned.

Qarabag were a lot better on the ball than I thought

The first 20 minutes saw a relatively even affair. Qarabag have grown in confidence in the UCL after being beaten by Chelsea in their opening match of the competition. Two draws against Atletico Madrid, showed their defensive resilience by only conceding one goal in the two ties.

On the ball, they were effective, striking the post and really should have been 1-0 up before a penalty was awarded to Chelsea.

Throughout, when they had possession, they played it, refusing to go long, it’s a shame for them, they were in a group with three big hitters, otherwise they may have had a go at the Europa League.

The Penalty killed the tie

The penalty that was awarded on Willian and the following red card killed the competitiveness of the tie. It was expected that Chelsea would dominate possession and most likely win but it’s always a shame when a red is shown so early and a penalty when the underdogs are playing well. Hazard’s penalty was converted and it was really already over then.

False 9 may be the way for Chelsea

Chelsea are fairly light on striking options this season, with Conte seeming to favour Morata or a false 9 in place of Batshuayi. Not only does that place a lot of pressure on Morata, it may prove tricky over the Christmas period to keep the same XI and the false 9 may be the option. With Morata you usually get one of – Pedro or Willian, with the other starting on the bench and usually replacing the other around the 60/70 minute mark. However with Hazard playing in the striker position, they can utilise all three, also all three rotate, they are all good on the ball, passing but will all make runs into the box.

If Chelsea can pass their way though a defence, I think an attacking three of Pedro, Willian and Hazard could be a second choice that works very well.

Qarabag will have nightmares about Willian

Two penalties were given for fouls on Willian, which allowed his teammates Hazard and Fabregas to get on the scoresheet. As well that Willian, on his 200th appearance for the blues, netted a brace. His first, a beautiful one-two and a lay off from Hazard that he neatly tucked in. But his second was a beauty, he was fed the ball, ran towards the D and let loose. Rocketed into the bottom of the net. Makes clever runs, linking up with Hazard, wins penalties, scores from outside of the box? Yes, Qarabag won’t be wanting to see him anytime soon, man of the match performance.

Are Chelsea doing it again?

Finding form at the right time? Last year they began sloppily and when they found form, it rarely faltered. Last year, Conte changed the shape defensively and it worked to their advantage, this year, I think the difference is Hazard. As mentioned by Peter Henry, Morata is thriving off his partnership with Hazard.

Hazard playing centrally whether behind the striker or as a ‘false 9’ is to Chelsea’s benefit. He loves to interlink with his teammates, a nice flick to Morata last week, a lovely lay-off to Willian against Qarabag. The focal point of this team is Eden. As long as the players around him understand that, I genuinely think Chelsea are England’s best hope in the Champions League this season.