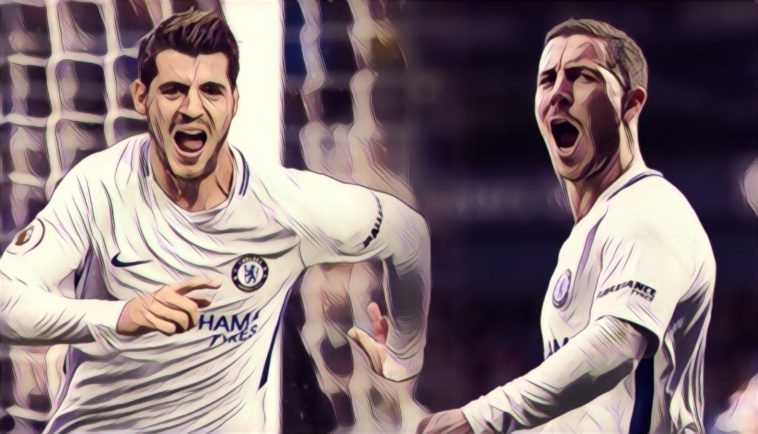 Last season it was Antonio Conte’s decision to change to a back three that saw Chelsea go on a sensational 13 game winning streak, and ultimately coast to the Premier League title. During The Blues 4-0 demolition of West Brom at The Hawthorns this weekend we caught a glimpse of another one of the Italian coaches tactical tweeks paying dividends.

Conte’s decision to move Hazard to a more central role behind Morata has shown plenty of promise of late, but on Saturday the relationship between the pair really started to click and some of their one-touch link up play was frighteningly good at times.

Belgium international Hazard helped himself to two clinically taken goals, one of which was assisted by a sublime world-class flick around the corner by Morata. It is no surprise that Hazard is thriving in his new number 10 role as he has spoken repeatedly of his dislike for the defensive duties the left-wing role he has mostly occupied since arriving at Stamford Bridge in 2012 entails.

His new free role allows the 26-year-old to roam across the frontline into pockets of space where he can use his pace and superb dribbling ability to hurt opposing teams.

Morata on the other hand has defied many of his critics with his excellent performances so far this season. Many observers believed  the 24-year-old would struggle with not only the pace and intensity of the Premier League, but also making the step up to being the main striker at a club like Chelsea.

Although he had previously played for European giants like Real Madrid and Juventus the talented youngster had never quite managed to hold down a regular starting berth at either club.

Morata has proved his doubters emphatically wrong scoring eight goals and providing four assists in his first 11 Premier League appearances. The Spain internationals ability to hold the ball up and run the channels from his lone-striker role has meant that Chelsea have barely felt the loss of controversial striker Diego Costa.

On Saturday Chelsea’s two most talented attacking talents combined to show just how devaatating they can be in tandem;  contributing  three of their teams four goals and six of their seven shots on target.

If Conte can focus on getting the best out of the partnership between Hazard and Morata, not only does it pose a scary proposition for Premier League defences, it may even turn out to be the reason Chelsea recover from a stuttering start to this campaign and go on to have a successful season.