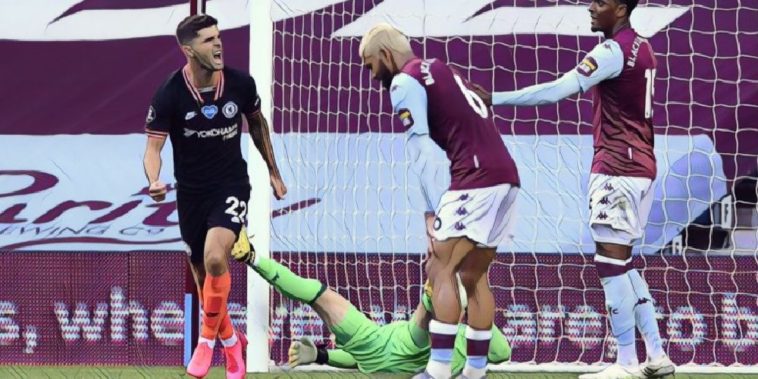 Chelsea came from behind to open up a five-point advantage over their Champions League chasing rivals with a 2-1 victory over relegation-threatened Aston Villa.

While Aston Villa had restarted their season on Wednesday evening, the hosts were left firmly chasing shadows for much of the afternoon in a game which was totally dominated by fourth-placed Chelsea.

However, despite their dominance, Frank Lampard’s side would go in at the break trailing thanks to Kortney Hause’s 43rd minute strike, the defender turning home the rebound after Kepa Arrizabalaga had saved Anwar El Ghazi’s close-range effort from a Douglas Luiz cross.

Chelsea continued their relentless dominance in the second period, completing their turnaround with a quickfire double in the 60th and 62nd minute. Substitute Christian Pulisic met Cesar Azpilicueta’s delicious cross at the back post, the USA international tapping the ball home unopposed before Olivier Giroud’s deflected strike gave the Blues the lead just two minutes later.

"I don't think I actually hit it perfectly with my left, luckily I got enough on it to steer it on target!"

Christian Pulisic came off the bench to help #CFC come back from behind to beat #AVFC 2-1 at Villa Park. pic.twitter.com/G3q3WyHi4X

Speaking at his post match press conference, Frank Lampard was delighted with his side’s performance, though once again called on them to be ‘more clinical’ in front of goal – an issue he will no doubt hope will be solved by the summer arrival of Timo Werner.

“I am really pleased with the performance,” Lampard said. “Villa had the opportunity to do it one time more. It was new for us. We moved the ball well, dominated but we need to be more clinical. I can give leeway on that because it has been a long time out.”

Lampard admitted that he ‘felt for’ Christian Pulisic having left the American on the bench at the start, tipping him to net plenty of goals for the club.

“He was hungry, I know that and I felt for him,” Lampard revealed.

“He has trained well. The ability to arrive in the box is a big thing and I think he can get big numbers. It is a difference between being a very good player on the flank and a top class player.”

Today’s game was also the first time Ruben Loftus Cheek featured in a Premier League game since May 2019 due to an Achilles injury.

“I am delighted for Ruben to be back in the fold,” Lampard added. “He got in the team on his own merit with working well. In training, he has looked good and strong. We need to give him time to adapt. I thought it was a game for his physicality. There is more to come.”

Chelsea move to within three points of third placed Leicester ahead of Thursday’s game against Man City, while Villa remain second from bottom with Newcastle next up for the second city club.

Read – Tactical Analysis: How will Timo Werner fit in at Chelsea