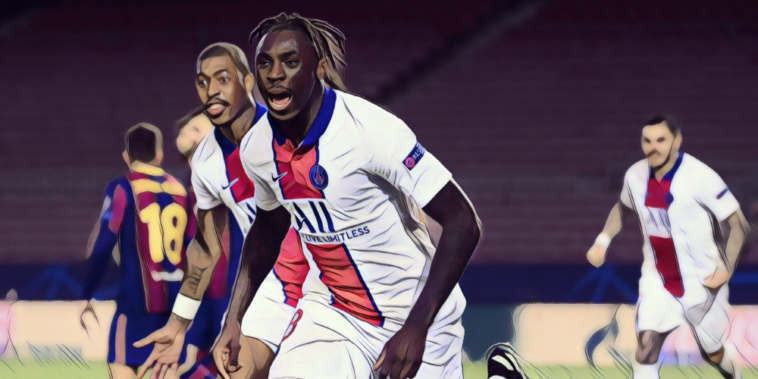 Paris Saint-Germain have admitted they will attempt to sign Everton forward Moise Kean this summer, following the Italian’s successful loan spell at the club.

The former Juventus man joined the Toffees back in August 2019 after a promising spell in Italy, yet ultimately struggled for game time in England, Dominic Calvert-Lewin emerging as the undisputed starting striker at the club.

Kean’s underwhelming time at Goodison Park was epitomised during Everton’s 1-1 draw with Manchester United at Old Trafford, the Italy international entering the fray as a substitute on 70 minutes, before being withdrawn just 18 minutes later by caretaker boss Duncan Ferguson.

The arrival of compatriot Carlo Ancelotti did not change his fortunes as many hoped, the youngster eventually being sent out on-loan to PSG in the summer.

After his difficult, albeit brief, time in the Premier League, the 20-year-old has been a revelation at the Parc des Princes, netting 14 times in all competitions thus far, including 10 in Ligue 1.

Alongside the likes of Kylian Mbappe, Neymar and Angel Di Maria, the centre-forward has thrived and netted an excellent header in the 4-1 thrashing of Barcelona at the Nou Camp last week.

While the player’s season-long loan deal in France does not reportedly include an option-to-buy, the club are seemingly interested in signing him permanently, with director of football Leonardo admitting that  Kean’s loan spell has been ‘very positive’.

“It’s hard to know; I think we’ll understand the situation better towards the end,” he told France Bleu.

“It was a choice, we couldn’t do otherwise than the loan, and I think that today, to have Kean for a year at our disposal was already something very positive.

“If we can glimpse the future under certain conditions, and we’ll see which ones, we’ll try and see how it goes.

“But today, it’s very complicated to know how it’s going to happen.”