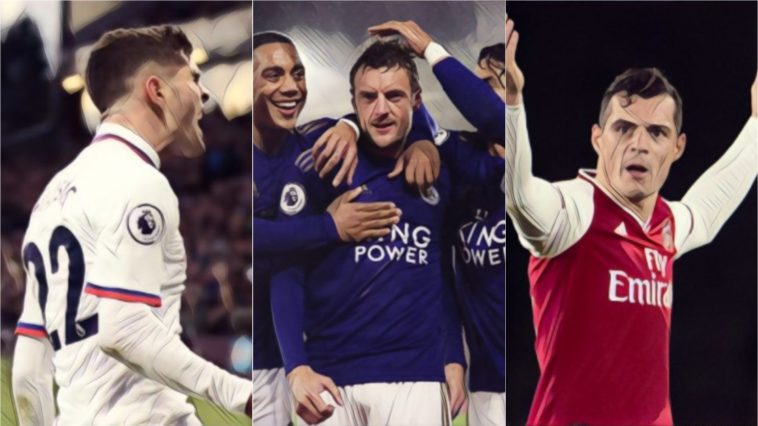 Almost exactly a year on from the tragic and untimely death of their chairman, Vichai Srivaddhanaprabha, Leicester City put themselves in the history books after Friday night’s 9-0 demolition of Southampton. Only one other Premier League team can claim to have inflicted such a battering on an opponent.

It was one of those nights where everything the Leicester players touched went in the net, but it was no fluke and they thoroughly deserved to win by a distance. As for the Saints, they don’t seem to have progressed very much since last season. In fact, they might even be going backwards.

There were several outstanding performers in that Leicester City victory, but in Chelsea‘s win over Burnley, there was one standout player who drove his team to a 4-2 triumph: Christian Pulisic.

The left-winger became the first American to ever score for the Blues, and then went ahead and scored twice more. The former Borussia Dortmund man now has as many hat-tricks as Dennis Bergkamp and Cristiano Ronaldo – after just one start in the Premier League.

It was actually the first time he’s scored more than once in a single game in club football, illustrating some exceptional individual ability along the way. For his opening goal, Pulisic lost the ball in midfield before tenaciously winning it back and taking it all the way home.

For the second goal the Pennsylvanian drove through the middle at ease, his right-footed shot from the edge of the area taking a deflection on its way in. He completed the set after meeting a Mason Mount cross in the second-half, executing the perfect hat-trick: left foot, right foot, head.

It was a bad day at the office for Norwich, but their day was brightened up by Argos fanboy Onel Hernandez scoring a spectacular goal. The Cuban dispossessed Scott McTominay in midfield before tearing through the defence and blasting a low drive past David de Gea.

Elsewhere, Pascal Groβ absolutely thundered in a free-kick for Brighton against Everton. Jordan Pickford could have done better, but it was an aesthetically pleasing strike nonetheless.

Regular readers of this column will know that I can’t resist a good back flick, so when I saw Marcus Rashford complete one to Anthony Martial in the build-up to the Frenchman’s goal, there was no way it wasn’t going to end up here. Not a bad finish either.

Arguably the toughest job in football this season is being the Norwich City goalkeeper. Although the Canaries play some very attractive football, they leave themselves wide open at the back. They’ve conceded the second most goals in the top flight (24), the second most shots per game (17.5), and have kept just one clean sheet after ten matches.

Case in point, Tim Krul had a great game against Manchester United on Sunday. The Dutchman made eight saves on the day, two of which were penalties. It was his best performance since setting the record for most saves in a single Premier League game (14) back in 2013. And yet, his team still lost 3-1.

The showreel save came when Anthony Martial diverted Marcus Rashford’s cross with his head just four yards from goal, but the shot-stopper was equal to it, pushing it over the bar. Krul will earn plenty of plaudits over the course of the season, but it’s going to be a long one for him.

Only bad things happen when Serge Aurier plays. Just last month he received two yellow cards against Southampton for a pair of braindead challenges, and then on Sunday the Tottenham Hotspur right-back kicks the calf of Sadio Mane in the penalty box, gifting Liverpool the chance to win the game.

The day beforehand Lucas Digne also gifted the opposition a win, although he was just unlucky rather than foolish. The Everton left-back diverted Leandro Trossard’s low cross past his own goalkeeper, giving the Seagulls a 3-2 lead in the 94th minute.

For those who have not yet realised: Sheffield United are a ridiculously solid outfit.

Now 58 matches in all competitions since Sheffield United last lost a match by more than a single goal.

It’s difficult to know who to blame for the debacle at the Emirates Stadium on Sunday. Yes, Granit Xhaka was acting the maggot and will probably regret telling the club’s fans to “fuck off”, which is peak donkey behaviour after all. But then again, what supporters boo their own captain (or any of their players for that matter) when they’re being subbed off?

And what of Unai Emery, the Arsenal manager? He’s the one who keeps picking the Swiss midfielder, even though he’s been anonymous in numerous games this season and clearly has a temperament issue, in case that wasn’t obvious before now.

I’m going to engage in some classic fence-sitting and bestow the Donkey crown on all of them: Xhaka, Emery, and the Arsenal fans. You earned it, guys!