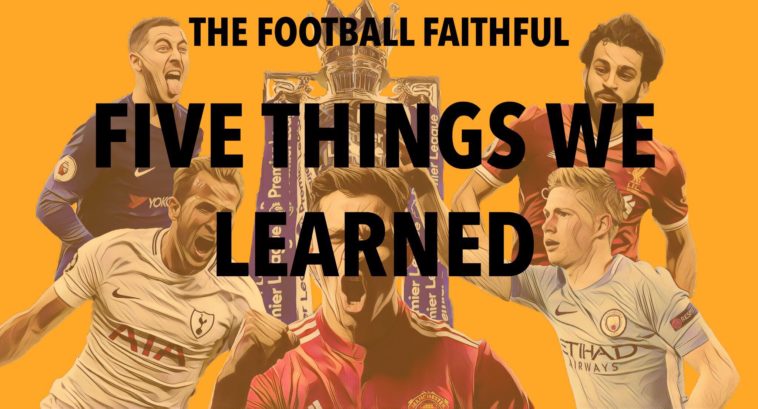 Another weekend of Premier League action has come and gone and things are already starting to heat up. At both ends of the table, there is already plenty to ponder.

Here’s a look at the five things we learned from this weekend’s action.

Four straight defeats and some pretty abject performances had left The Hammers in crisis and their new manager in real danger even at such an early stage. They have now dug in and pulled off two very good results in as many weeks.  They were somewhat fortunate to hang on for a 0-0 draw with Chelsea on Sunday, with Sarri’s men enjoying much more of the ball and clear-cut chances.

West Ham though fought well and some of their new signings are now starting to produce.  Fabianski and Anderson look like solid investments and at least Hammer’s fans can now start to see an overall improvement on the pitch.  They could so easily have been winless after six games given their tough run of fixtures, so Pellegrini will be delighted to have now put the brakes on their early season plummet.  They are also the first team to keep Hazard quiet so far, no easy feet when you consider the Belgian’s form.

City show no sign of hangover after Champions League wobble

For the second time so far this season, Pep Guardiola’s champions have had to bounce back from a poor result.  Dropped points at Wolves and a home defeat to Lyon in the Champions League have shown that his centurions are fallible after all.  Then again, their 5-0 walloping of Cardiff City was also yet another warning of just how deadly this Manchester City team can be.

In all honesty, it could easily have been eight or nine for City without Cardiff having any real complaints. Guardiola’s men were outstanding on the day and showed no signs of being too affected by their European woes.  They will have far tougher afternoons in the weeks ahead, but they were at their astonishing best in the Welsh capital on Saturday and bounced back the way all good teams should.

Liverpool show their strength in depth

Last season Liverpool had a real problem with their European hangovers.  In fact, they won just one of their immediate fixtures after their Champions League knock out run in 17/18, such was their paper-thin squad depth and fatigue in the ranks.

The early signs are encouraging for Liverpool fans that they have seriously taken steps to address this problem.  Although Klopp didn’t ring the changes too heavily at Anfield against Southampton, Matip and Shaqiri were brought in to the fold without affecting Liverpool’s flow or ability to dominate proceeding in their 3-0 win.

They were also able to rest James ‘Ribena’ Milner and Joe Gomez after a frenetic performance against PSG.  Keita and Fabinho remained on the bench and look pretty handy players to have around the squad.  They will need that depth as the season goes on and the intensity continues to ratchet up.

Huddersfield and Cardiff endured yet another painful weekend of action as they both succumbed to heavy defeats.  They have identically woeful records of goals for & against after six games, with just three scored and staggering fourteen conceded each, leaving them propping up the Premier League table.

Huddersfield were all over the place at Leicester despite taking an early lead.  Tellingly, they look short of that togetherness and character which aided them in starting so well last season.  Unless they can find goals and quick, they look certain to be in the bottom three come next May.

Cardiff too have similar issues, with their squad lacking the required quality to grind out results.  In fairness to them, it’s harsh to judge their abilities in games against Manchester City, but they were thoroughly outclassed on Saturday and will need to show much more fight if they are to avoid the drop. We could have two of the three boxed by Christmas at this rate, to the delight of Newcastle fans everywhere.

Wolves have been a very hard team to judge thus far.  They have played some really lovely stuff at times but been very wasteful and shown naivety at key moments in games when a decisive ball was required to kill off a move.  Their record after five games was fine for a newly promoted side, but you get the feeling that they are already hungry for more success in the top flight after years in the wilderness.

At Old Trafford on Saturday, Nuno Espirito Santo’s men showed their true colours as they had a real go at Manchester United to nick a well-deserved point.  Joao Moutinho’s thumping equaliser was one of the best goals of the season so far and the visitors had a few chances to nick a win on the day.  It was by far the best we have seen from them so far this season and it bodes well for the big ambitions that they have players with the confidence to go at Manchester United in their own back yard.

Mourinho will not be impressed by some of his player’s application as they were second best across the park to the newly promoted side. United have been below par this season and will be bitterly disappointed to have been so reliant on saves from David de Gea to keep them level with Wolves.  With Sir Alex Ferguson watching on from the stands, there will have been plenty of grumbling from the Old Trafford faithful.

To keep up to date with all the latest Football scores as they happen visit 777.score