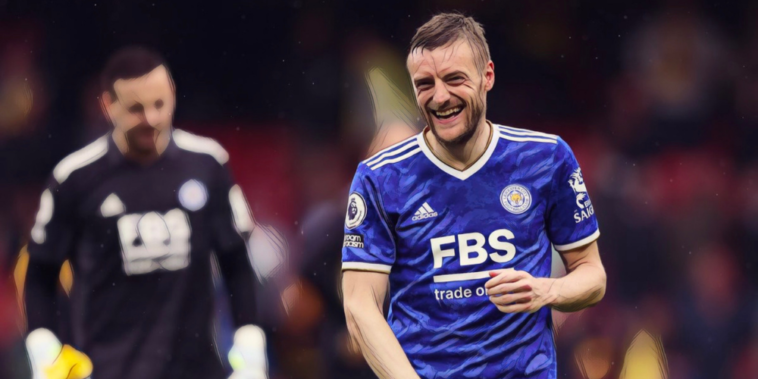 We’re back with our Premier League Team of the Week, as we delve through the latest action and compile an XI of the weekend’s best performers.

The title race could be set to go down to the final game of the season after Manchester City drew at West Ham, the league leaders – who missed a late penalty – forced to come back from two goals down to rescue a point at the London Stadium.

There was also late drama at Leeds who climbed out of the Premier League’s bottom three, whilst Spurs increased the pressure on Arsenal as a win over Burnley moved Antonio Conte’s side into the Champions League places.

Pope was a busy goalkeeper during the opening period as Burnley battled to keep the game scoreless at Spurs, making saves from Harry Kane, Son Heung-Min and Emerson Royal.

The England goalkeeper was eventually beaten from the penalty spot as Kane scored the decisive goal in first-half stoppage-time, but he made two superb reaction saves to frustrate Son in his chase for the Premier League’s Golden Boot in the second half and keep Burnley in the contest.

👏 What a performance from this man today 👏

Should the Clarets drop into the Championship, he will be on the radar of top-flight clubs searching for a new number one this summer.

Castagne was full of endeavour and energy down the Leicester right, providing an outlet as James Maddison drifted inwards to create opportunities for the Foxes at Watford.

The Belgian will be disappointed he did not manage to clear Joao Pedro’s opening goal for the Hornets, but bounced back to produce a solid display and showed anticipation to cover for teammates as Watford threatened to get in behind.

His work-rate at both ends was valuable to Brendan Rodgers’ side and only a strong save from Ben Foster denied Castagne’s name from joining the scoresheet.

Antonio Conte’s arrival has helped bring the best from Eric Dier and the defender continued his solid season with another strong showing in Spurs’ 1-0 win over Burnley.

Back-to-back wins and clean sheets have kept the North Londoners in the race for Champions League football and Dier was alert to defensive danger this weekend as Spurs battled to a hard-fought three points.

The central role in Conte’s back three suits the style of Dier and he stood up well to the Clarets’ pressure after half-time.

"I feel like the relationship between this group and the manager is something special and I really want to continue to build that.

"It would be a real shame for it to end now."

Eric Dier hopes this is merely the beginning for Tottenham and Antonio Conte. pic.twitter.com/LmDWrd6HFf

Nathan Collins’ reputation continues to enhance with each passing performance, the Burnley centre-back excellent once again as the club fell to a narrow 1-0 defeat at Spurs.

Collins made a brilliant acrobatic clearance to deny a goal-bound Harry Kane header in the opening exchanges and showed his class at both ends of the pitch, including a fine through ball to send Maxwel Cornet in on goal.

The 21-year-old’s £12m fee is looking like shrewd business for Burnley and there will be a queue of clubs interested in the Irishman should the Clarets fail to secure survival this season.

Collins made three blocks and four clearances at Spurs and has emerged as one of the division’s most promising young defenders since breaking into the Burnley side.

Digne has had a testing time during the early months of his Aston Villa career but was the club’s stand-out performer in the 1-1 draw with Crystal Palace this weekend.

The France international created created more chances (3), completed more attacking third passes (15/16) and had more touches (81) than any other teammate against the Eagles, with his forward threat influential and his defensive work solid at Villa Park.

Digne’s arrival from Everton was deemed a coup in the January transfer window and this was a reminder of his quality, a performance which included a wonderful cross to assist Ollie Watkins for the game’s opening goal.

Tomas Soucek returned to the West Ham side after a rest at Norwich with a disciplined defensive display.

The Czech Republic international was an assured screen in front of the back four against Manchester City and made a number of vital interceptions for his team, dropping in deep to help his centre-back’s deal with the visitor’s threat.

Soucek has been criticised in recent weeks after a below-par run of form but was full of running, as ever, and won a crucial flick in the build-up to the Hammers’ second goal.

One of the signings of the season, Eriksen has made an immeasurable difference to Brentford and was once again at the centre of another win for Thomas Frank’s side.

The Denmark international pulled the strings in midfield as the Bees twice came from behind to win 3-2 at nine-man Everton, ending the clash with an impressive six accurate crosses and five chances created for the visitors.

His arrival has coincided with Brentford emerging as one of the Premier League’s form teams, with only Liverpool, Manchester City and Tottenham having taken more than the Bees’ 22 points from their last 10 league fixtures.

It is a run of form that has propelled Brentford into the dizzying heights of 11th and a top 10 finish is possible for the Premier League debutants ahead of the final fixtures of the campaign.

Another influential performance from the Leicester midfielder, who continued his quietly excellent campaign with another goal and two assists in the 5-1 win at Watford.

Maddison has now provided 26 goal involvements across all competitions for the Foxes this season, with his 16 goals the highest return of his career to date.

Brendan Rodgers was gushing in his praise for Maddison and labelled the creative quality of the midfielder as ‘sensational’. The 25-year-old will be hoping he has done enough to force his way back into Gareth Southgate’s thinking ahead of the summer.

What a season Jarrod Bowen is having, with the West Ham winger moving to 12 league goals for the campaign with a double in the 2-2 draw with Manchester City.

It should now be when and not if he is selected for England in the summer and Gareth Southgate will no doubt have been impressed with his latest showing against the league leaders.

Bowen epitomises the qualities needed in a modern wideman, combining endless work-rate with quality in the final third and the timing of his movement from outside to in exposed City’s high defensive line at the London Stadium.

12 Premier League goals is the most in a season by a @WestHam player since Marlon Harewood scored 14 in 2005-06 pic.twitter.com/xltlDywUaD

The 25-year-old now has 22 goal involvements (12G, 10A) in the Premier League this season, the same figure as Kevin De Bruyne.

Harvey Barnes has rediscovered his form in recent weeks with the Leicester winger having registered three goals and three assists across his last five Premier League appearances.

Barnes has been back to his best in wins over Norwich and Watford, with the 24-year-old taking his brace against the latter in expert fashion this weekend.

His first goal was a controlled first-time finish from Marc Albrighton’s cross, before collecting James Maddison’s pass to roll home a clinical second late on.

It’s now 11 goals and 13 assists across all competitions for Barnes in 2021/22, who like Leicester has a ceiling higher than he has often shown this season.

Leicester are no doubt glad to have Jamie Vardy back fit and firing, with the evergreen forward scoring twice in the club’s 5-1 thrashing of Watford to make it four goals in two starts since returning from injury.

The Foxes’ fortunes have been hindered by Vardy’s absences with hamstring and knee issues this season, but the 35-year-old has been excellent since his return and took both goals in signature fashion this weekend.

Vardy was alert and aware to beat Ben Foster to the ball for his first, before an instinctive second took the forward to 14 league goals for the campaign.

Always an outlet in a fine all-round performance, there are little signs that the veteran is slowing down and Leicester will hope he remains at this sort of level in an injury-free 2022/23.