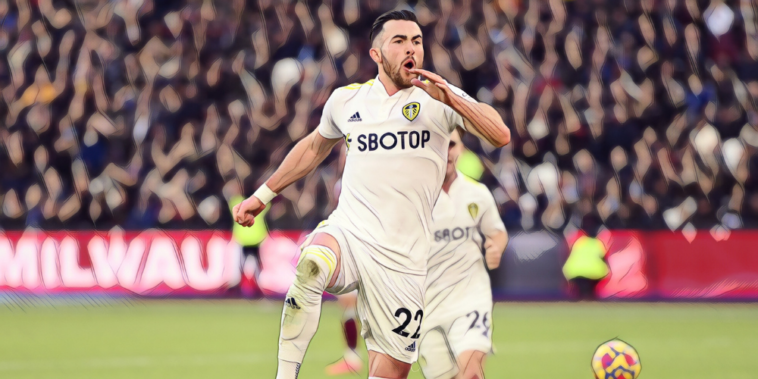 Each week we delve through the Premier League’s weekend action and compile our divisional Team of the Week, with the latest round of fixtures including some huge results and plenty of drama.

Manchester City moved closer to the league title after beating Chelsea at the Etihad, Kevin De Bruyne scoring the only goal of the game for the champions who now boast an 11-point advantage over nearest challengers Liverpool.

Aston Villa fought back from two goals down to draw with Manchester United as a new arrival stole the headlines, whilst Leeds damaged West Ham’s hopes of a top-four finish after securing an entertaining win at the London Stadium.

Jose Sa’s excellent first season with Wolves continued with the goalkeeper producing another fine performance in the club’s 3-1 win over Southampton.

The Portuguese shot-stopper was a commanding presence coming off his line and made vital saves in the first half, including a wonderful reaction stop from Mohammed Salisu’s free header.

Sa boasts the best save percentage of any regular goalkeeper in the Premier League so far this season (85.9%) and has proven a shrewd signing since his arrival from Olympiacos last summer.

As ever, involved in much of Liverpool’s forward threat, with Alexander-Arnold tasked with finding the right delivery as the Reds sought to break down Brentford at Anfield.

His return to the side after illness resulted in some mixed crosses, but he registered his 10th league assist of the season as Fabinho converted from the right-back’s corner to open the scoring.

Trent Alexander-Arnold has reached 10 league assists for the third time in four seasons:

The 23-year-old now has 12 goal involvements in just 19 league appearances and has reached double figures for assists for the third time in four seasons, his role in this side one Liverpool find hard to replicate in his absence.

Coady marshalled the Wolves backline in signature fashion against Southampton, winning his duel with Armando Broja as the in-form Southampton loanee was kept relatively quiet at Molineux.

The England international’s organisation and vocal presence was important alongside debutant Toti Gomes, whilst he scored what proved to be the match-winner after following in Max Kilman’s effort to score his second Premier League goal of the season.

Pure passion from our skipper! 💛 pic.twitter.com/guuRN2wEn0

Manchester City are heading rapidly towards a fourth title in five seasons after beating Chelsea this weekend, the champions patient in their pursuit of what could be a defining win in their season.

City dominated possession for large periods and restricted Chelsea to minimal chances, with Laporte excellent alongside John Stones as the duo dealt with the threat of Romelu Lukaku.

Laporte won a towering header over Timo Werner in the build-up to City’s winning goal at the Etihad, whilst he also made a superb block to stop the same player from snatching an equaliser from close range.

The fact that Ruben Dias could be left amongst the substitutes and City remain so strong defensively is a testament to the depth of talent in Pep Guardiola’s squad.

Norwich moved off the bottom of the Premier League after securing just a third win of the season against Everton, a victory that drags their beaten opponents closer to a relegation dogfight.

Brandon Williams earned a huge ovation from the Canaries’ fans following a combative and tenacious performance at left-back, with the Manchester United loanee winning possession and charging forward down the flank to tee up Adam Idah for the winning goal.

Williams was typically aggressive in his challenges and won his duel with Anthony Gordon in a back-and-forth clash between the duo.

Jacob Ramsey is getting better and better as he develops into an increasingly important figure at Aston Villa, with the midfielder at the centre of his side’s comeback against Manchester United.

The 20-year-old slammed home his first goal at Villa Park to reduce the two-goal deficit in a positive performance, before driving forward to tee up debutant Philippe Coutinho’s equaliser as Villa rescued a point.

Ramsey’s best role in the side perhaps remains unclear but the academy graduate is under the perfect manager to develop his game as an all-action Premier League midfielder.

Kevin De Bruyne has regularly haunted his former side in recent seasons and scored his fifth career goal against Chelsea with a brilliant winner at the Etihad this weekend.

There are signs that the reigning PFA Player of the Year is getting back to his best and he was greeted with a standing ovation following his substitution against Chelsea, having played a central role in a win that moves City ever closer to another championship success.

His goal was a moment of magic, driving forward and remaining on his feet despite the desperate challenge of N’Golo Kante before bending home a fine finish into the far corner.

Manchester United’s hopes of a top-four finish were dealt a blow after drawing at Aston Villa, squandering a two-goal lead as the hosts fought back to claim a point.

The positive of an otherwise disappointing result was the performance of Bruno Fernandes, however, who looked somewhere closer to his old self after two goals at Villa Park.

The midfielder opened the scoring with a fortuitous first after Emiliano Martinez’s mistake, before doubling the Red Devils’ advantage in clinical fashion after bursting into the box.

Raheem Sterling’s renaissance continued this weekend with the winger tormenting Chelsea in an impressive performance at the Etihad, leaving Marcos Alonso in all kinds of trouble during an electric showing.

Sterling endured a forgettable 2021 at club level, but found his form towards the end of the year and has continued in the same vein this month.

The England international’s acceleration and drive resulted in an early caution for Alonso and the Chelsea wing-back will not endure much tougher afternoons than this, as Sterling’s direct approach caused problems throughout and provided City with a menacing threat.

Having struggled to replicate last season’s performance so far this term, Jack Harrison was back with a bang to score his first career hat-trick during Leeds’ 3-2 win at West Ham.

Harrison has been criticised for his end product this season but was clinical at the London Stadium, scoring three goals as a Leeds side missing a wealth of senior figures edged an entertaining contest in the capital.

The winger worked hard throughout and took his chances superbly, including a wonderful lifted finish over Lukasz Fabianski for the match-winning goal.

Adam Idah’s first goal in the Premier League secured Norwich a 2-1 win over Everton this weekend, with the 20-year-old shining as the Canaries moved above Burnley and Newcastle in the bottom three.

Idah was a handful all afternoon against a struggling Everton side, with his work-rate and physical threat difficult to deal with for the visitors.

Idah has had to be patient for his chance this season but Dean Smith spoke glowingly about the Republic of Ireland international post-match and the forward will now be hopeful of a run of games as he bids to fulfil his potential at Carrow Road.

Read Also – FFP: It feels unfair that Newcastle must be sensible and shrewd while living out a dream