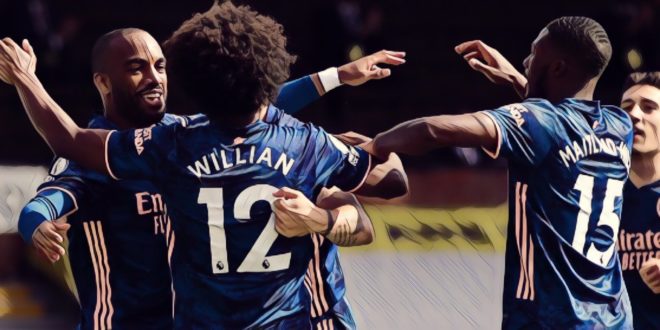 Premier League Team of the Week for Gameweek 1

Premier League football is back and a thrilling opening weekend has left fans with plenty of talking points, with champions Liverpool given an almighty scare in a pulsating clash with newly-promoted Leeds at Anfield.

Elsewhere there were impressive victories for new-look Arsenal, Everton and Newcastle sides, with a host of debutants starring across the division as English football’s top tier made its hugely anticipated return.

For the very first time this season, we’ve compiled our dream XI of the weekend’s action and there are plenty of faces in new colours making our maiden side.

Here is the Football Faithful’s Premier League Team of the Week:

Crystal Palace began the new season with three points courtesy of a solid home display against Southampton, Roy Hodgson’s side continuing to prove that defensive resilience is the key to securing results.

Much has been made of the Eagles ageing side and lack of regular routes to goal, but their trademark organisation was once again evident to secure a 1-0 victory at Selhurst Park.

Key to their success was the performance of goalkeeper Guaita, who produced a commanding display, including a brilliant stop to deny Che Adams and a late, late intervention to deny Danny Ings from close range.

Timothy Castagne earns his inclusion in our side at right-back following his debut impact for Leicester, the versatile defender marking his first appearance in English football with a headed opener against West Bromwich Albion.

The Belgian international was full-on industry down the flank and it was an encouraging performance in a makeshift backline for Castagne, who looks like a smart acquisition from Italian high-flyers Atalanta.

After a disappointing end to last season Leicester began the new campaign with a comprehensive win, and will hope to continue that momentum as they look to improve on last season’s fifth-placed finish.

Reece James’ stunning strike for Chelsea and Tariq Lamptey’s display for Brighton in the same fixture also deserve a mention, a host of right-backs making their mark this weekend.

Have Arsenal finally found a long-term solution to their centre back issues?

Summer signing Gabriel was thrust straight into the starting line up despite a lack of action and looked immediately at home, the Brazilian looking every inch the leading Premier League defender on an impressive debut showing for the Gunners.

And he was named Man of the Match. 💪 pic.twitter.com/8chEE401rA

The 22-year-old capped an assured display with a headed goal on a debut to remember at Fulham, and whilst there will undoubtedly be sterner examinations than the newly-promoted Cottagers, it was a positive start to life in England for the £27m man.

Wolves made a flying start to the new campaign with two goals in the opening six minutes to down Sheffield United, the second of which came via a powerful header from centre-back Roman Saiss.

The Moroccan international is a vital component of a well-oiled machine at Molineux and proved a difference-maker at both ends of the pitch on Monday evening, producing a stand-out defensive display and showcasing his threat at the other end.

Such was the danger Saiss posed in an attacking sense, the 30-year-old could quite easily have helped himself to a hat-trick in a dominant display at Bramall Lane for Wolves.

So often amongst Everton’s most creative players despite his presence in the back four, Lucas Digne’s dangerous delivery ensured Carlo Ancelotti’s began the new season with a promising performance to secure victory at Tottenham.

No Everton player had more touches, made more passes or attempted more crosses than the France international, whose expert delivery was headed home by Domonic Calvert-Lewin for the game’s only goal.

One of a huge six debutants to feature in our Team of the Week, Allan instantly made his presence known at the heart of the Everton side this weekend with a tireless display in the club’s 1-0 win at Spurs.

The Brazilian was signed from Napoli having worked under Carlo Ancelotti at the Italian side, and the Toffees boss will have been fully aware of the qualities the industrious midfielder would bring in protecting the club’s back four.

Allan screened the defence with great authority and made two interceptions, three clearances and four tackles in an authoritative debut display at the base of a new-look Everton midfield.

The Merseyside club were devoid of leadership and ideas in central areas last season but their trio of new signings in Allan, Abdoulaye Doucoure and James Rodriguez looks to have galvanised the side, with supporters perhaps daring to dream of Europe following a fine opening day performance.

Newcastle fans bemoaned the uninspiring signing of Jeff Hendrick on a free transfer from Burnley this summer, but on the evidence of his debut display, there will be few moaning at what looks like a smart pick up by Steve Bruce.

The Republic of Ireland international arrives at St James’ Park as part of Bruce’s Premier League proven policy when it comes to the summer, and quickly looked at home in Newcastle colours as the club secured an opening day win at West Ham.

Tucked inside in our XI despite largely playing from a roaming wide role, Hendrick was an energetic presence for the Magpies and provided the assist for Callum Wilson’s opener with a clever flicked header.

A dream debut at the London Stadium was the capped with a fierce strike to seal the three points, Hendrick swiftly going some way to winning over his new supporters.

The second of Everton’s marquee signings to feature in our Team of the Week, the arrival of James Rodriguez from Real Madrid was seen as a significant coup for the Toffees as they bid to build a side capable of challenging for Europe.

Rodriguez’s debut performance instantly provided a reminder of the stardust the Colombia international can bring after a frustrating couple of seasons, the 29-year-old creating five chances in the win at Spurs, the most of any player on their Premier League debut since Alexis Sanchez for Arsenal six years ago.

No player created more chances (5) or made more interceptions (4) in Spurs vs. Everton than James Rodriguez.

A dazzling display in his first PL outing. ✨ pic.twitter.com/lr57c6oUkm

The 29-year-old also showed a willingness to work for the side and provided several moments of the class his left foot can bring, Rodriguez possessing the quality and potential to transform an Everton side which has been void of creative inspiration in recent seasons.

Shifted over to the left flank in our side is Willian, the winger’s opening day performance for Arsenal too influential to leave him out of this side.

The Brazilian international has been widely tipped as one of the bargain buys of the summer after moving across the capital from London rivals Chelsea on a free transfer, where he swiftly showed just how influential he can be to his new side.

The 32-year-old had a hand in all three goals as the Gunners ran riot against newly-promoted Fulham, providing assists for both Gabriel and Pierre-Emerick Aubameyang, in addition to striking the post himself with a fine free-kick.

Willian’s experience in winning silverware could prove crucial to a new-look Arsenal under Mikel Arteta this season, the winger arguably the value deal of the summer so far.

The champions made a winning start to their title defence and on a weekend in which several debutants made an impression, it was a familiar face at the heart of Liverpool‘s success with a scintillating showing.

Mohamed Salah raced into an early lead for the Premier League’s Golden Boot with a clinical hat-trick against Leeds at Anfield, scoring twice from the penalty spot in addition to a laser-like effort into the top corner.

"He looks mean, he looks hungry, he looks strong. His game is more mature." 🔥

Could Mo Salah become the best player in the world? 🌍

The Egyptian international provided a reminder of why he ranks amongst the most feared forwards in world football and already looks a leading contender to finish as the division’s top scorer for the third time in just four seasons.

Gary Neville said Salah could become the best player in the world based on this display, the 28-year-old already ‘not far’ from that status according to the Sky Sports expert.

Dominic Calvert-Lewin enjoyed a career-best campaign last term before fading badly towards the season’s end, but bounced back with a vital winning goal in Everton’s win at Tottenham this weekend.

The young forward has improved immeasurably since the appointment of Carlo Ancelotti at Goodison Park, with the Italian seemingly a huge fan of the player’s talents and combative approach.

Calvert-Lewin rose magnificently to power home Lucas Digne’s superb cross for the only goal of the game, his heading ability a major asset of his game at present.

The 23-year-old scored a respectable 13 league goals last season, but he will need to improve on that tally if Everton are to push towards the top six and Europe this season. If he does, senior England recognition may not be too far away.