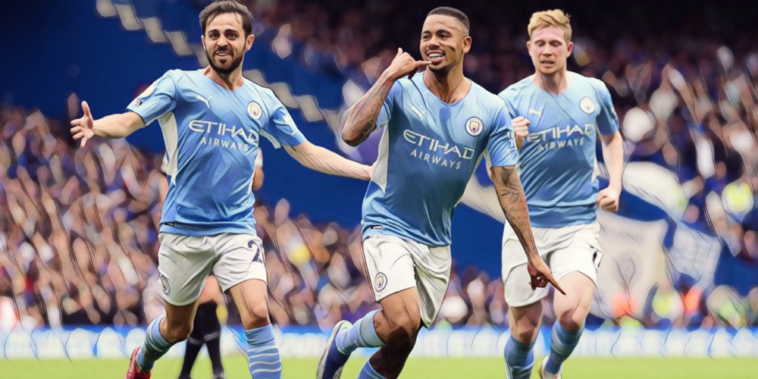 Manchester City face Chelsea on Saturday lunchtime, a clash that could all but end the west London side’s fading hopes of a title challenge at the Etihad.

Tottenham and Arsenal meet in a huge North London derby that will have implications on the race for Champions League football, whilst there are pivotal games at the bottom this week as Watford meet relegation rivals Newcastle and Burnley in quick succession.

Friday night football will see the resumption of one of the Premier League’s most unique rivalries, as hostilities resume between two clubs with a clear dislike for one another despite their geographical distance.

Almost 50 miles separates Brighton and Crystal Palace, but the animosity between the fanbases stems from a run of fixtures that became increasingly heated during the 1970s.

🗣 "The team who make less mistakes will have more chance of winning the game."

Patrick Vieira believes Crystal Palace vs Brighton will be decided by the small details of the game pic.twitter.com/rXmhXorCU5

Recent campaigns have seen the two regularly do battle in the Premier League, but the Seagulls have struggled in their recent encounters with the South Londoners and have failed to win in each of the past five meetings.

With both sides under the guidance of managers with burgeoning reputations and each possessing an exciting collection of young talent, the first fixture of the weekend could prove a classic contest in the latest instalment of the M23 derby.

The end of the title race?

Manchester City appear a juggernaut that will take some stopping this season, racking up 11 consecutive league wins to put significant breathing space between them and the chasing pack.

Chelsea and Liverpool’s draw last time out left the duo 10 and 11 points behind the league leaders respectively and City now have the chance to strike a final blow to the former’s hopes of bridging the gap this weekend.

Nothing but a positive result will do for the west Londoners, who face finding themselves with an insurmountable margin to close should their visit end in defeat.

Chelsea lost the reverse fixture at Stamford Bridge as the champions earned a deserved win, but won the previous three encounters in all competitions, including a 2-1 win at the Etihad last season.

Having been wasteful against Tottenham despite earning progress to the Carabao Cup final in midweek, Tuchel will need to see his side be more clinical and compact to beat Pep Guardiola’s side this weekend.

Goals a problem for struggling Burnley

Burnley will be targeting this week’s fixtures with realistic hopes of maximum points, facing a Leicester side without key personnel and relegation rivals Watford on home soil.

Sean Dyche’s preparations have been disrupted by the sale of Chris Wood to Newcastle this week, after the Magpies activated the release clause in the forward’s contract.

19th place Newcastle buying 18th place Burnley's main striker, Chris Wood, for £25M. Newcastle are away to Burnley on the last day of the season. Could be an interesting game!

Maxwel Cornet is also absent at the Africa Cup of Nations and that duo have been responsible for 56% of Burnley’s league goals this season, with the club’s next highest scorer centre-back Ben Mee on just two goals.

Burnley’s remaining forwards – Ashley Barnes, Matej Vydra and Jay Rodriguez – have scored just once between them in the Premier League and if the Clarets are to find a way out of danger they will need alternative avenues to goal.

More should also be expected from Dwight McNeil and Johann Berg Gudmundsson who each remain goalless so far this season.

For all the wealth of marquee names linked with Newcastle since their billionaire-backed takeover, it’s been a frustrating January transfer window for the Magpies to date.

Newcastle’s position in the Premier League’s relegation places has seemingly dissuaded potential signings arriving this month, with the capture of Chris Wood from Burnley somewhat underwhelming for the world’s richest club.

🎙 Eddie Howe speaks to the media ahead of #NEWWAT.

"We're really pleased with the signing of Chris. I think he'll fit in really well to the team. He's experienced, he's ready to play and he knows the Premier League. He gives us something a little bit different." pic.twitter.com/9MSbkfkl60

The signing of a centre-forward, however, was crucial ahead of a huge clash with Watford this weekend given Callum Wilson’s continued absence from the side through injury.

Eddie Howe will hope Wood can hit the ground running ahead of his St James’ Park debut, having taken a short-term view to survival with the signing of the 30-year-old New Zealand international.

Wood has just three league goals this season, but has reached double figures in each of the past four campaigns and will provide the focal point that Newcastle have lacked in recent weeks.

Having strengthened whilst simultaneously weakening a relegation rival, the Magpies’ ownership will hope it’s a gamble that can lead to survival.

Aston Villa have been the major movers of the January transfer window so far, backing new manager Steven Gerrard with the additions of Philippe Coutinho and Lucas Digne.

Both players should be viewed as considerable coups for an ambitious Villa side, having each previously been regarded amongst the Premier League’s very best in their positions.

Digne will provide elite levels of creativity from full-back, with only Trent Alexander-Arnold (267) having created more chances than the Frenchman (211) amongst all full-backs since the start of the 2017/18 season.

The loan arrival of Coutinho from Barcelona will be a deal that truly excites the Villa fanbase, however, as Gerrard looks to coax the best from a former Liverpool teammate whose career has stalled.

The Brazil international was sublime in periods during his time at Anfield and his brand of football will serve as the perfect replacement for Jack Grealish, with a run of games perhaps all that’s required to rediscover his finest form.

Coutinho averaged a goal or assist every 101 minutes during a loan spell at Bayern Munich in 2019/20 and will be tasked with firing Villa upwards across the second half of the season.

Much has been made about Liverpool’s loss of Mohamed Salah and Sadio Mane to the AFCON, but the Reds’ lacklustre showing against Arsenal in midweek was a vivid reminder of their importance.

Liverpool registered just one shot on target despite possessing a man advantage for over an hour after Granit Xhaka’s 24th-minute red card, struggling to breakdown the stubborn visitors in the absence of their leading goal threats.

Takumi Minamino did little to impress during his audition for a prominent role this month with the Japan international blazing a glorious late chance over the bar when it appeared easier to score.

No Salah, no Mane, no goals for Liverpool 😬 pic.twitter.com/sf3x4sM0vC

Liverpool face Brentford this weekend and whilst the Bees are without a clean sheet in seven and shipped four to Southampton in midweek, their defensive statistics demonstrate Thomas Frank’s side can be stubborn to break down.

Brentford rank fifth for xGA on home soil and ninth in away fixtures, with Klopp in need to find a solution if Liverpool are to remain in touch at the top.

It could be a fixture for the unpredictability of Alex Oxlade-Chamberlain and/or Curtis Jones, with the workman-like midfield in midweek failing to support a forward line without it’s leading names.

Jarrod Bowen is enjoying quite some season as part of a West Ham side who remain right in the mix for a top-four finish and Champions League qualification.

Bowen scored twice during the 2-0 win over Norwich in midweek, taking his season haul to five league goals. The winger has also added seven assists, with no English player having been directly involved in more goals (12) than the 25-year-old in the Premier League this season.

Combined goals and assists across all competitions this season:

He now has 18 goal involvements in all competitions, again the most of any player eligible for England and a figure that leaves him ahead of Harry Kane (14), James Maddison (14), Phil Foden (13) and Jude Bellingham (13).

Given the struggles of names such as Jadon Sancho and Marcus Rashford in recent months, Bowen’s consistent creativity should see him emerge in the frame for a maiden England call up.

Having been unearthed as a lower league gem, he is now a fully-fledged Premier League performer of an increasingly improving standard.

Arsenal travel the short distance to face Tottenham this weekend in a crucial North London derby contest, the two sides sitting fifth and sixth at present and in pursuit of a top-four finish.

The Gunners have seen their options depleted in midfield following Ainsley Maitland-Niles’ loan move to Roma and the participation of Thomas Partey and Mohamed Elneny at the Africa Cup of Nations.

Granit Xhaka’s latest moment of madness during the club’s Carabao Cup semi-final with Liverpool on Thursday means he will also now be suspended at Spurs, leaving Arteta’s squad severely stretched.

"He's the one letting the young players down. That is a player which they HAVE to move on"@Carra23 gives his verdict on Granit Xhaka at Arsenal pic.twitter.com/zJXxTTT9ag

With doubts also over both Martin Odegaard and Emile Smith Rowe heading into the clash, it could be Charlie Patino who partners Albert Sambi Lokonga in a midfield void of experience.

Defeat could prove devastating for Arsenal and would move Spurs a point above them with two games in hand. The pressure is now on for Arteta to find a suitable midfield combination after once again being let down by one of his most experienced players.