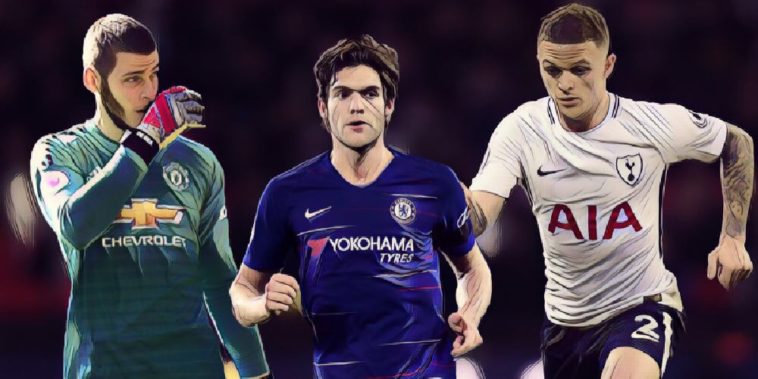 Now that the 2018/2019 season has come to an end, it’s time take stock of which players performed well and who struggled.

With this in mind, we’ve decided to take a look at 10 Premier League players who regressed during the course of the last season.

Oh David, it’s not been the best of seasons for you has it son. So often Manchester United‘s saviour in the post-Alex Ferguson era, the 28-year-old has looked a shadow of the player many considered to be the best goalkeeper in the World not so long ago.

Such was De Gea’s excellence in recent seasons he was always going to struggle to maintain the elite standards he had set, but nobody expected his fall from grace to be so severe. Not only has it been the high-profile errors against the likes of Arsenal, Barcelona, and Chelsea that has been so alarming, any regular United watcher will tell you the Spaniard has simply looked to be suffering from something of a crisis of confidence for most of the season.

Apart from one superhuman performance against Spurs back in January, it’s been a season to forget for #DaveSaves, which is bizarre really as players normally up their game when they are looking for a mega-money new contract. De Gea does, however, still have plenty of credit in the bank with the Old Trafford faithful and you’ve got to feel for any ‘keeper who’s had to play behind the likes of Chris Smalling and Phil Jones for such a long period of time.

3 – David de Gea has made three errors leading to goals in his last four games in all competitions for Manchester United – as many as in his previous 123 matches combined for the Red Devils. Sloppy. #MUNCHE pic.twitter.com/Tbq59cYSU7

After the high of being one of England’s stand-out players and scoring that famous free-kick against Croatia in the World Cup semi-final, Spurs right-back Trippier has come crashing back down to earth this season.

The 28-year-old’s main attributes have always been his crossing and dead ball delivery, but his defensive shortcomings have been horribly exposed on a regular basis during this campaign.

Kieran Trippier own goal with commentary from his goal against Croatia in the WC pic.twitter.com/SKZDdJl1u2

It may seem a bit harsh to include a player who scored 23 goals in all competitions and won a historic treble with his club in this list, but there can be little doubt that Brazil international Jesus has looked nothing like the phenomenon he did when he moved to the Etihad in January 2017.

So impressive was Jesus after initially arriving in England many felt his signing could spell the end of Sergio Aguero’s time in Manchester. However, Aguero has left nobody in any doubt as to who is City’s first-choice striker and Jesus has had to deal with acting as a backup or ‘cup striker’ for most of this season.

After struggling for Brazil at the World Cup Jesus has looked a little short of confidence as of late, although he did look sharp during Man City‘s 6-0 win over Watford in the FA Cup final and at just 22-years-old he still has plenty of time to fulfil his undoubted potential and become ones of the games top strikers.

Gabriel Jesus: Has missed more clear-cut goalscoring opportunities (7) than any other player in Europe's top five leagues this season

After being one of Chelsea‘s most influential players during Antonio Conte’s two-year tenure at Stamford Bridge, Alonso has struggled badly this season and has become a hugely unpopular figure with his own clubs fans.

Alonso’s issues stem from a positional change from wing-back under Conte to left-back under current Blues boss Maurizio Sarri. When playing as a wing-back Alonso’s attacking strengths were maximised, but when asked to a play in a four-man defence his lack of discipline and tactical naivety have been exposed time and time again.

The Spain international is currently being linked with a return to his homeland with Atletico Madrid, and it’s fair to most Chelsea fans would gladly pack his bags and drive him to the airport, so poor has he been this season. Although it does seem strange that Diego Simone would want to sign a defender, who can’t actually defend.

When Manchester United gazumped Man City to the signing of Alexis Sanchez from Arsenal in January 2018, many fans and pundits felt he was the missing piece of the jigsaw for then Red Devils boss Jose Mourinho.

When you consider the fact that Sanchez’s £500,000-a-week wages make him the highest paid player in Premier League history, it’s no exaggeration to say his move to Old Trafford is arguably the most disastrous transfer deal that English football has ever seen.

Not only has his bumper pay packet caused plenty of issues in the Old Trafford dressing room, but the form of the Chile international has also been stinking, with the 29-year-old looking a shell of the player who was so impressive during his spells at Arsenal and Barcelona.

After just one goal in 27 appearances this season, reports suggest Sanchez will be offloaded this summer, although United look set to take a massive hit financially in any deal that sees him depart the club.

On his day Shelvey has the creative and technical ability to be the type of playmaker in midfield that England have struggled to produce in recent times. However, throughout his spells at Liverpool, Swansea and now Newcastle the 27-year-old’s temperament and attitude have often been called into question.

Although he has suffered from injury issues at times this season, just 10 Premier League starts shows that Magpies boss Rafa Benitez just doesn’t trust the Romford born midfielder as much as he once did.

Definitely the harshest and most controversial of our picks is Belgian playmaker Kevin de Bruyne. The 27-year-old was Man City’s most influential players last season, providing 16 assists and scoring eight goals in 37 Premier League appearances, as Pep Guardiola’s side romped to the top flight title with a record 100 points.

However, persistent injury issues have meant we have only seen glimpses of De Bruyne at his devastating best during the current campaign. Each time it has seemed that KBD is returning to his best form – like during the Champions League quarter-final second leg against Spurs – he has soon suffered a fresh injury that sets back his progress.

It was mid-April when De Bruyne registered his first top-flight assist of the season during his sides win at Crystal Palace, and a return of two goals and two assists in 19 Premier League appearance, shows how much his influence has waned in comparison to the 2017/2018 campaign.

It’s truly scary to think how City would have performed had they had De Bruyne at his peak throughout this season, and we have little doubt that if he can stay clear of injury he will soon show himself to be one of Europe’s top attacking midfielders again.

When you hear that was Kevin de Bruyne's first assist in the Premier League this season…#MOTD2 #MCFC pic.twitter.com/C7fMtRTRLi

Bournemouth’s signing of experienced Premier League goalkeeper Begovic from Chelsea in 2017 seemed like a shrewd piece of business. However, after enjoying a relatively solid first season on the south coast the Bosnia international’s form has fallen off a cliff during the current campaign.

In just 24 Premier League appearances the former Stoke man has made a league-high five errors that have lead to goals, and Eddie Howe is widely expected to sign a new ‘keeper this summer. Sadly for Begovic on current form, it seems unlikely that too many top-flight clubs will be clamouring to offer him a new home over the next few months.

Most errors leading to goals made by goalkeepers in the Premier League in 2018-19:

It’s hard to believe that Alli has just turned 23 considering the amount of elite football the Spurs playmaker has played over the last four seasons. Up until the start of this season, no other young player in Europe could match Alli’s total of goals and assists, since he moved to White Hart Lane from MK Dons in 2015.

However, after a World Cup in which he was arguably the only England player not to increase his reputation, Alli has struggled badly this season. Of course, a dip in form is completely understandable when you consider the amount of football he and many of his Spurs teammates have played in recent years, but just eight goal involvements in all competitions this season shows a marked drop off in his effectiveness.

Alli once again looked quite a way off his best during Spurs 2-0 defeat to Liverpool in the Champions League final, and Mauricio Pochettino will be hoping that a good rest over the summer will see the attacking midfielder return to the type of form that saw him being tipped to be the best English player of his generation not so long ago.

Mauricio Pochettino says there is no player better than Dele Alli in his age group.

Since his arrival at the Emirates in 2016 from Valencia, German defender Shkodran Mustafi has been busy cementing his place as the worst centre-back to play for a top-six club – yep, even he’s even worse than Phil Jones!

This season Mustafi did something that Arsenal fans thought impossible, he actually seemed to get even worse. Enjoy some of his best bits below. What.A.Donkey.

I present to you all
Shkodran Mustafi pic.twitter.com/KZpr50pRIl

Reckon you remember the 2018/19 season pretty well? Try our Quiz.