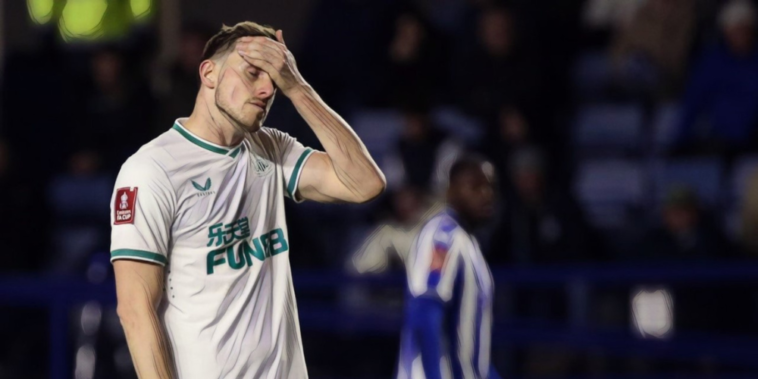 Eight top-flight clubs fell at the first hurdle in the FA Cup this weekend, with several big names crashing out of the competition in the third round.

It’s the highest number of Premier League sides to go out at this stage since 2007/08 (9) and a ninth will join the list of early exits when Wolves and Liverpool settle their tie in a replay next week.

Here are the eight Premier League clubs who were dumped out in the FA Cup’s third round.

Everton are a struggling side right now with the pressure beginning to increase on Frank Lampard. The Toffees have lost seven of their past ten Premier League games to drop into the relegation places and the switch to cup competition failed to inspire a turnaround in form.

Lampard’s side took on an in-form Manchester United side in the FA Cup’s third round, but fell to a 3-1 defeat as Marcus Rashford inspired the Red Devils into the fourth round draw. Conor Coady had brought Everton back into the game after Antony’s early opener, but later scored an own goal to restore United’s advantage.

Rashford – who set up the first two goals – scored the third from the penalty spot to seal the win. Everton had reached the quarter-finals in each of the past two campaigns, but fell at the first hurdle in 2022/23.

The presence of five all-Premier League ties contributed to the high number of early exits in the third round, with Crystal Palace another who were eliminated against a top-tier rival.

Patrick Vieira’s side have now lost three of their four games in all competitions since returning from the World Cup break, after a 2-1 defeat to Southampton at Selhurst Park.

Odsonne Edouard had handed Palace a first-half lead in South London, but James Ward-Prowse brought the Saints level as his crossed free-kick evaded everyone to find the far corner.

The @SouthamptonFC skipper puts it into an area of uncertainty and reaps the rewards 🎯#EmiratesFACup pic.twitter.com/GPx1C3pXv1

Vicente Guaita’s catastrophic error then led to Southampton’s winner, as Adam Armstrong charged down the goalkeeper’s attempted clearance before rolling the ball into the unguarded goal.

Armstrong’s winner secured Southampton – semi-finalists and quarter-finalists in the last two seasons – a place in the FA Cup fourth round.

Bournemouth bowed out of the FA Cup in the third round, as the Cherries ran into a Burnley side full of confidence and momentum.

The Championship leaders won 4-2 in an entertaining contest on the South Coast, with summer signings Anass Zaroury and Manuel Benson in fine form to score a brace each. Vincent Kompany’s side have won 11 of their past 13 games in all competitions and were well worth the win, passing the test of Premier League opposition as the Clarets charge towards promotion in the second tier.

The former Manchester City captain has used his Belgian connections well in the summer, with the signings of Zaroury (Charleroi) and Benson (Royal Antwerp) having proven inspired investments from his home nation.

Burnley will take confidence from beating a Bournemouth side they will hope to join – or replace – in the Premier League next season.

Nottingham Forest were on the wrong end of one of the results of the weekend, as Steve Cooper’s side suffered an embarrassing exit to second-tier strugglers Blackpool.

Blackpool are without a win in nine league games and have dropped into the Championship’s relegation places, but thrashed a second-string Forest side 4-1 at Bloomfield Road.

Came for the goal, stayed for the celebration! 😂🕺@IancarloP#EmiratesFACup pic.twitter.com/b22amDgliZ

Forest had changed their entire XI with Cooper focused on survival in the Premier League this season and the lack of understanding was evident as Blackpool cut through their top-flight opponents in the second half.

Marvin Ekpiteta had given the Seasiders a first-half lead, before Ian Poveda, CJ Hamilton and Jerry Yates struck after the break. Ryan Yates’ stoppage-time reply for Forest was little consolation.

A familiar face ended Brentford’s FA Cup campaign in the third round, as Said Benrahama scored the winner against his former club in an all-London match-up against West Ham.

Brentford had beaten the Hammers in a Premier League meeting between the teams last month, but David Moyes’ side exacted revenge to keep alive their hopes of silverware this season.

Saïd Benrahma with a scorcher against his former club 🫢#EmiratesFACup pic.twitter.com/d8oTVQmdnO

Benrahma’s moment of magic settled the tie and knocked out his old club as he collected a loose ball, drove forward, and thumped home an effort from distance. It was a morale-boosting victory for West Ham, who had gone six without a win before beating Brentford.

Newcastle suffered a shock defeat in the third round as Sheffield Wednesday stunned the in-form Magpies to secure a cupset at Hillsborough.

The Owls arrived into the game in fine form of their own as the club chase promotion from League One, with a 13-game unbeaten run in the league providing the confidence to take on the Premier League’s third-placed side.

Newcastle are third in the Premier League. Sheffield Wednesday are 43 places lower than them in English football.

The League One side just knocked them out of the FA Cup 😳 pic.twitter.com/O0tOuCzu8A

Josh Windass – the son of former Middlesbrough and Hull forward, Dean – scored both goals in the second half, with Newcastle unable to get back into the game despite Bruno Guimaraes’ reply for the visitors.

It was a disappointing defeat for Newcastle, who had high hopes of a cup run given their league form. The Magpies have not reached the FA Cup final since successive defeats in the late nineties and have not won a domestic trophy since 1955.

The loss was just the second of the season in all competitions for Eddie Howe’s side and first since defeat at Liverpool in August.

Graham Potter is beginning to feel the heat at Chelsea as the club’s concerning form continued with an early FA Cup exit.

It’s now one win in eight games across all competitions for Chelsea, who were thrashed 4-0 at Manchester City. Defeat at the Etihad is no disgrace, but the manner of the loss will increase the pressure on Potter as his team were outplayed, outfought and outclassed.

Chelsea are knocked out in the third round of the FA Cup for the first time in 25 years 😳 pic.twitter.com/tfruyrnaty

City cruised into the fourth round and were 3-0 up at half-time, as goals from Riyad Mahrez (2), Julian Alvarez and Phil Foden did the damage for Pep Guardiola’s side. Chelsea could not cope on a chastening evening, with those who made the journey from west London departing well aware of the gap between their current side and the Premier League’s top team.

The travelling support chanted the name of former manager Thomas Tuchel and Potter’s grace period is beginning to run out. Results must improve for Chelsea, who are tenth in the Premier League table and already out of both domestic cups.

The shock of the FA Cup third round came at Villa Park as League Two Stevenage staged a stunning late fightback to dump out their Premier League opponents.

Stevenage are pushing for promotion from the fourth tier, but few anticipated an upset when Morgan Sanson fired Villa into a first-half lead.

Steve Evans’ side then turned the game on its head late on, as Dean Campbell robbed Leander Dendoncker of possession in a dangerous area to win a penalty, with the latter shown a straight red card for bringing down the midfielder.

In the last 12 months, Unai Emery has knocked Bayern Munich out of the Champions League and been knocked out of the FA Cup by Stevenage.

Football is a funny game 😅 pic.twitter.com/bjtm7H3HMk

Jamie Reid converted the spot-kick for an 88th-minute equaliser, before substitute Campbell sealed a famous win. He collected a short corner as Villa were caught sleeping and lashed inside Robin Olsen’s near post to seal success for Stevenage – 59 places below Villa in English football’s pyramid.

Remarkably, it is the seventh straight season that Villa have lost in the third round.