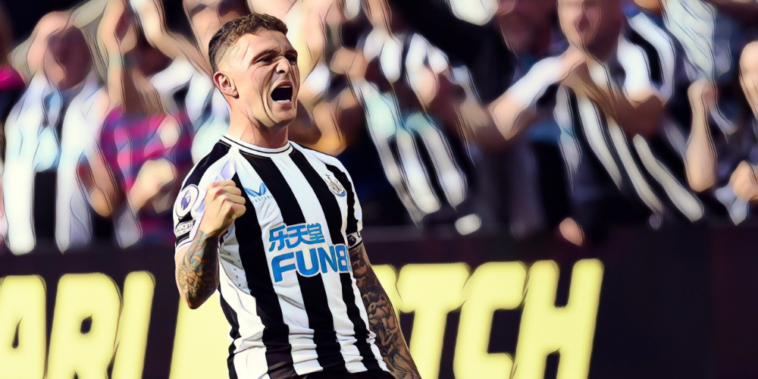 Discussing the secret of City’s success on the final day, Grealish said: “There were two secrets… one, Riyad [Mahrez], take him off the pitch, as soon as possible. He played like [Miguel] Almiron.

“Number two, [pointing at Bernardo Silva] he’s been so good this season, but get him off the pitch.”

There was almost a sense of inevitability as Almiron got on the scoresheet against City this weekend, turning home from close range to cap a performance in which his penetrative runs and work-rate caused constant problems.

Miguel Almiron gave his shirt to a fan at full-time that was holding a sign that read: 'Miggy, can Grealish have your shirt?'

How can you not love this guy 😂#NUFC pic.twitter.com/dcol8Iek5A

Grealish – absent from the clash through injury – might just have stoked a little fire in the Paraguayan, who handed his shirt to a fan holding a sign that mocked Grealish’s comments at full-time.

It’s not often that Manchester City struggle to come up with answers, but for large periods of the club’s clash with Newcastle the champions did not know how to cope with Allan Saint-Maximin.

Saint-Maximin has been criticised for a lack of end product at Newcastle, but this weekend the winger was electric in a thrilling 3-3 draw between the teams at St James’ Park.

On this occasion the fleet-footed Frenchman was unplayable and he tormented the visitor’s backline, driving at the City defence with frightening footwork and explosive acceleration. There was substance alongside the skills of Saint-Maximin however, as he dug out a cross for Almiron’s equaliser, before turning provider once again to tee up Callum Wilson.

The 25-year-old was then brought down for the free-kick from which Kieran Trippier scored Newcastle’s third, as City failed to get to grips with the twists and turns of the mercurial Magpie.

Newcastle are a team on the rise and unlocking the best from Saint-Maximin on a consistent basis could take Eddie Howe’s improving team into Europe.

It’s taken time for Leeds fans to warm to Jesse Marsch, but an unbeaten start to the campaign has raised the optimism levels at Elland Road.

The club’s 3-0 win over Chelsea was Leeds’ best performance under Marsch’s management, with summer signings Brenden Aaronson and Tyler Adams outstanding in midfield.

There was fear among the fanbase following the exits of Raphinha and Kalvin Phillips, but the new arrivals seem to have settled quickly with Leeds up to third in the early Premier League table.

With games against Everton (H), Brentford (A) and Nottingham Forest (H) in their next four, Leeds have the chance to build a foundation for a successful season.

An honourable mention must go to Graham Potter, who has seen his Brighton side overcome a difficult start to the season – on paper – with impressive results.

Away wins at Manchester United and West Ham in their opening three have raised cautious hope of a push for Europe, though Brighton’s best results continue to come alongside a hint of surprise. They shouldn’t, the Seagulls are a fine outfit with Potter’s reputation continuing to soar.

Good morning from us and Graham. 🎉 pic.twitter.com/VFT5LXmvm6

Kieran Tripper has scored five goals in his Premier League career, four of which (80%) have come from free-kicks.

Remarkably, three of those free-kicks have come in his eight starts for Newcastle with this weekend’s Beckham-esque effort against Manchester City perhaps the best of the lot.

A fantastic free-kick from Tripper, against the club where he came through the academy ranks.

What a difference a year makes. This time last season, Arsenal were rooted to the bottom of the Premier League without a single goal or point and Mikel Arteta appeared to have the weight of the world on his shoulders.

After three games this season the Gunners have a perfect record and are looking down at the rest of the division.

3 – Arsenal are the first top-flight side to win their opening three league matches the season after losing their first three since Everton in 1937-38 and 1938-39, with the Toffees going on to win the title in the latter of those seasons. Harbinger? pic.twitter.com/2V6tZLPFTb

Is there another Premier League midfielder who could make this pass?

Kevin De Bruyne just sees things that others don’t, including the run of Bernardo Silva behind a wealth of black and white shirts at St James’ Park.

The brilliant Belgian has now scored or assisted 18 times in his last 13 Premier League appearances, with his latest earning the champions a point at Newcastle.

Edouard Mendy’s mistake set the tone for a poor performance from Chelsea this weekend, with the goalkeeper’s howler handing Leeds a first-half lead.

With Brenden Aaronson bearing down on him at speed, Mendy’s attempted Cruyff turn on the edge of his six-yard box ended in disaster.

A moment’s hesitation from the Senegalese shot-stopper allowed Aaronson to steal possession, as the midfielder gratefully accepted a gift to score his first Premier League goal.

The Chelsea goalkeeper has had a shocker and Brenden Aaronson pounces to give Leeds United the lead! 😮 pic.twitter.com/BhFGost0gT

From there it all went wrong for Thomas Tuchel and his side, with Kalidou Koulibaly unfortunate to escape this unwanted accolade after a disastrous display. The centre-back struggled against Leeds’ tireless movement and was sent off for two tactical fouls.

Not a good day at the office for Chelsea’s Senegal internationals.