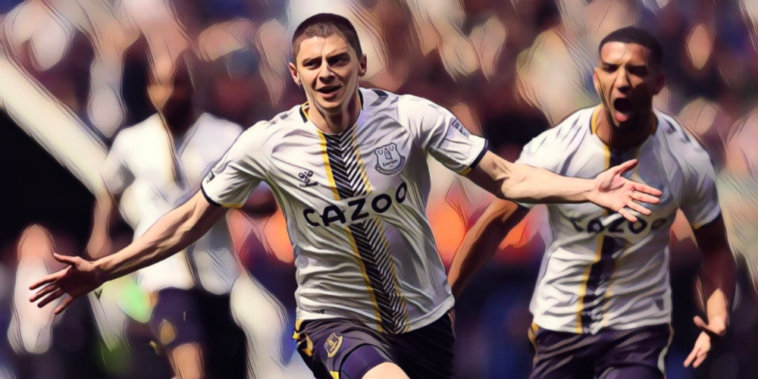 In a season of disappointments, Manchester United reached a new low after being battered 4-0 at Brighton.

It’s one win in five for the Red Devils and four defeats in their last seven, with hopes of a top four finish and Champions League qualification an increasingly distant memory.

Their season was perhaps summarised as Pascal Gross scored Brighton’s third goal and the camera panned to Cristiano Ronaldo, his face a picture of disbelief as the scenes unfolded around him

This was not how it was supposed to happen. Ronaldo’s return last summer was surrounded in optimism and romance, but instead it has proven a season of struggle and regression for his former side.

Should he remain with the Red Devils next season, it will be the first time in two decades that Ronaldo has not competed in the Champions League. The size of the rebuild for Erik ten Hag looks bigger with each passing performance.

Pep Guardiola’s decision to substitute Kevin De Bruyne in midweek caused surprise, as the Belgium international was withdrawn for tactical reasons in the defeat to Real Madrid.

It was a strange substitution even given the midfielder’s failure to truly influence proceedings at the Bernabeu, one that looks even odder following a superb performance from the 30-year-old this weekend.

At his best De Bruyne is the unstoppable heartbeat of this Manchester City side and their best performances centre around his creativity and ability to make things happen with an effortless ease.

Against Newcastle his full range was exhibited to the Etihad crowd, from brilliant crosses to precise passes through Newcastle’s defensive lines.

De Bruyne has 16 goal involvements in his last 17 league games and 14 in 14 home games this season. It’s the sort of elite productivity that has City closing in on a fourth Premier League title in five seasons.

It was a weekend of first goals in the Premier League this weekend, with Kristoffer Ajer, Moises Caicedo and Marc Cucurella among the names to open their account in the division.

The finest, however, came from the left boot of Vitaliy Mykolenko whose brilliant volley set Everton on their way to a crucial 2-1 win at Leicester.

What a way to score your first #EFC goal! 🎯 pic.twitter.com/HiA2ywfNFS

The Ukrainian has had a testing time adapting to the Premier League in a struggling side, with an almost instant change of manager and the events in his homeland having only complicated his adjustment.

There have been positive steps from the left-back in recent weeks however, and he is fast becoming a favourite of the Everton fans. Scoring goals as spectacular as this weekend’s is a sure way to improve his popularity on the terraces.

Jarrod Bowen is having quite some season at West Ham, with another two assists this weekend moving to winger to 20 goal involvements in the Premier League this season.

Mohamed Salah is the only other player to have reached 10+ for both goals and assists in 2021/22, whilst Bowen trails only Harry Kane (21) for direct goal involvements among English players.

The 25-year-old should have levelled the Tottenham forward during the Hammers’ 4-0 win at Norwich, however, after somehow blazing wide from close range at Carrow Road.

It was a slight blemish on an otherwise fine performance from Bowen, who must surely be in Gareth Southgate’s thoughts for England.

Manchester United appear further away than ever from the Premier League’s leading sides, their 4-0 defeat at Brighton a dismal performance and result.

The loss at Brighton was the 12th time the club have conceded 4+ goals in a Premier League game since Ferguson’s retirement in 2013, as many as the Red Devils managed in 810 games under the Scot.

The defeat also means that United are guaranteed to miss out on Champions League football, following a campaign in which the club have conceded 56 league goals – their most in a single season in the Premier League era.

United are also set for their lowest ever Premier League points total, with their maximum return of 61 points less than the 64 recorded during the 2013/14 campaign.

Jurgen Klopp was critical of Tottenham’s tactics after the North Londoners halted Liverpool’s momentum, grinding out a 1-1 draw at Anfield to dent the Reds’ title hopes.

Speaking in his post-match press conference, the German hit out at a perceived negative approach from the visitors on Merseyside.

🗣️ "I don't like this football, but that's my personal problem"

Liverpool boss Jurgen Klopp was critical of Tottenham's tactics after their 1-1 draw at Anfield on Saturday 👀 pic.twitter.com/arNp2C8zOm

“I am sorry, I am the wrong person to ask about [Spurs’ defending] because I don’t like this kind of football. But that is my personal problem. I think they are world class and I think they should do more for the game.

“It’s a game against Liverpool, they have 36 per cent possession. But that is my problem. I cannot coach it. So that is why I cannot do it. World-class players, [who] block all the balls. It is really difficult. Atletico Madrid is doing it. Fine, whatever, absolutely fine, it’s just I can’t. But yes I respect everything they do. But it’s not me.”

Manchester United’s beaten side and Norwich’s Tim Krul are fortunate to escape inclusion here, but it’s difficult to look past the idiocy of Luke Ayling’s red card challenge at Arsenal.

Leeds found themselves two goals down inside the opening 10 minutes against the Gunners, before Ayling – one of the club’s most experienced players – produced a moment of madness.

Having been ran ragged during the opening exchanges against Gabriel Martinelli, the full-back launched himself two-footed towards the Brazilian who was posing little danger near the corner flag.

96 – Along with Luke Ayling's red card, Leeds picked up their 95th and 96th yellow cards of the season, setting a new record for the most bookings for a club within a single Premier League campaign –

VAR swiftly upgraded an initial yellow card to a red, as the defender left his teammates facing an even greater task at the Emirates.

Leeds – in the bottom three after Everton’s win at Leicester – will now be missing Ayling through suspension as time runs out for the side to escape relegation.