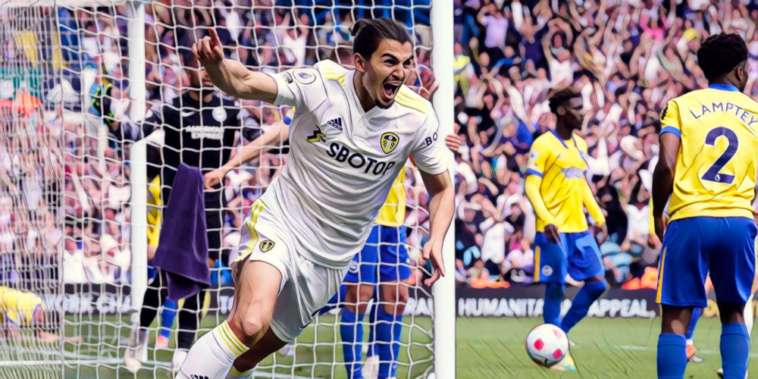 We’re set for a thrilling conclusion to the Premier League’s relegation battle with three teams all battling to avoid joining Norwich and Watford in falling through the division’s trap door.

Just two points separate Everton, Leeds and Burnley ahead of the final week of Premier League action, with Leeds leaving it late to secure a precious point against Brighton this weekend.

Pascal Strujik was the unlikely hero from Leeds, with the defender thrown on in the final minutes before heading home a stoppage-time equaliser against Brighton that saw Jesse March’s side climb from the bottom three.

Leeds are a side with plenty of faults, but a lack of spirit is certainly not one of those and Strujik’s goal was the sixth time the club have gained points (9) from stoppage-time goals in the Premier League this season.

Games in hand for Everton and Burnley mean the club’s fate is out of their own hands, but their never-say-die attitude has given Leeds a fighting chance of securing survival.

Leicester’s season has been one of disappointment with the Foxes missing out on European football after the success of back-to-back fifth-place finishes.

Successive wins have raised optimism, however, and Brendan Rodgers’ side secured their biggest away win of the campaign with a 5-1 thrashing of Watford this weekend.

Central to their success was the performance of Jamie Vardy, who has scored four goals in two starts since returning to the starting XI after a spell on the sidelines.

Vardy was back to his best in a clinical performance at Vicarage Road, his awareness as sharp as ever as he stole in to meet James Maddison’s long pass and head past Ben Foster.

The 35-year-old then raced onto another pass in behind and kept his composure to roll the ball past Foster, extending his record this season to 14 goals from 18 league starts.

Vardy trails only Mohamed Salah and Son Heung-Min for goals per game this season, whilst no player in the division can better his minute per goal record.

There’s plenty of life in the old Fox yet.

Brentford came from behind to beat Everton 3-2 at Goodison Park this weekend, with Yoanne Wissa central to the Bees’ success.

Wissa’s shot was deflected into his own goal by Seamus Coleman for Brentford’s first equaliser, before the winger scored a brilliant header to level the scores for a second time.

Brentford have fought back again! 😮

The 25-year-old got across the near post to flick on Christian Eriksen’s corner kick, snatching a leveller for Brentford from a seemingly impossible angle, although he was aided by some shoddy defending.

Time will tell just how big a moment Riyad Mahrez’s penalty miss for Manchester City will be in the season’s context, as the Algerian spurned a late chance to seal three points for the league leaders at West Ham.

Pep Guardiola’s team had fought back from two goals down to draw level at the London Stadium, before Mahrez missed from the spot in the closing stages.

Most @premierleague penalty saves since 2015-16

Most @premierleague penalty misses since 2015-16

City remain in pole position to retain the title and a win over Aston Villa at the Etihad will crown the club champions once again, but a win for Liverpool at Southampton on Tuesday night will see their lead reduced to just one point ahead of the season’s final weekend.

Mahrez’s miss might just have set up a tense final day of Premier League action as the race goes down to the wire and it remains to be seen whether his poor penalty proves decisive in the destination of the title.

Everton’s defeat to Brentford proved an enthralling encounter at Goodison Park, as the Toffees – who finished the clash with nine men – twice took the lead before falling to a 3-2 defeat on Merseyside.

The clash was just the fourth time in history that a Premier League match has had a red card, penalty and own goal inside the opening 45 minutes.

Salomon Rondon was then sent off in the second half as Everton ended with nine players and their battle to beat the drop will go on into the Premier League’s final week.

Mark Noble was left teary-eyed as he made his final goodbyes to the West Ham supporters on Sunday, having come on as a substitute in the 2-2 draw at Manchester City.

Noble’s 18-year career as a West Ham player will come to an end this summer and the midfielder was emotional in an on-pitch address to the Hammers’ fans at the full-time whistle.

“I hope that in the last 18 years I have done you proud,” Noble said in his speech to the supporters.

Salomon Rondon’s career with Everton was perhaps summed up in his brief cameo this weekend. Introduced with hopes of making an impact, he was instead sent off just four minutes later for a reckless two-footed challenge.

Things go from bad to worse for Everton as they are reduced to NINE men! 🔴

The Venezuelan claimed a slip in a half-hearted attempt to plead innocence and will now sit out the club’s final fixtures of the campaign as the Toffees battle to beat the drop.

It’s unlikely we will see Rondon in an Everton shirt next season.