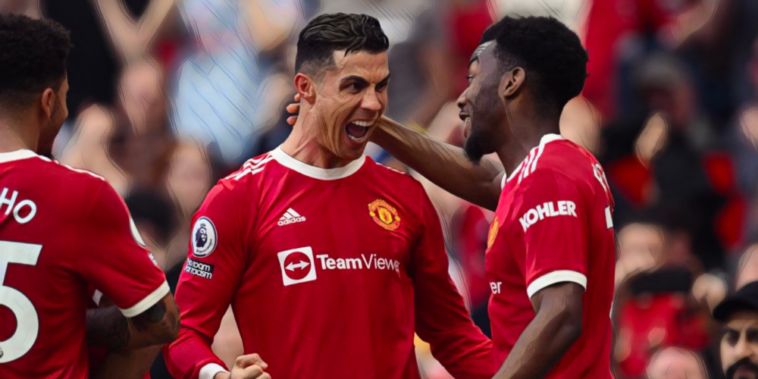 How big could Leandro Trossard’s goal prove to be in the race for Champions League football?

On a weekend of late winners in the Premier League, the Belgian winger scored to stop in-form Spurs in their tracks and tighten up the top four race.

Arsenal’s defeat at Southampton, coupled with a win for Manchester United against Norwich, means just three points separate the three teams in the chase for the fourth and final Champions League spot.

Spurs remain the favourites on current form despite their loss to Trossard and Brighton, but this weekend’s results has set the stage perfectly for a huge clash between Arsenal and Manchester United at the Emirates next weekend.

The race for the top four looks set to go down to the wire.

Manchester United have many problems at present, but Cristiano Ronaldo continues to paper over some of the cracks.

Ronaldo has been labelled a problem himself at times this season, a somewhat odd take given his goals have kept the Red Devils in the race for Champions League football.

The 37-year-old scored his second Premier League hat-trick in three games as United beat Norwich this weekend, scoring twice from close range in the first half before blasting home a fantastic free-kick after the Canaries had fought back to level.

30 hat-tricks before 30 and 30 hat-tricks after 30. It’s time to unbalance the scale! 💪🏽 pic.twitter.com/McgGZBmzyh

Ronaldo is not the long-term solution as the Red Devils look to return to former glories, but he has scored crucial goals in a dysfunctional team that lacked identity long before his arrival.

The incoming manager – expected to be Erik ten Hag – may decide to move Ronaldo on as he implements a new style that requires a different profile of forward, though he could yet have the Portugal captain to thank for a place in the Champions League next season.

That man again, with Cristiano Ronaldo’s hat-trick goal a deserving winner of Goal of the Week.

It had looked like another disappointing day for Manchester United after Norwich had fought back from two goals down to level at Old Trafford, before Ronaldo took matters into his own hands to blast home a winner.

It’s now 21 goals for the season in all competitions for the Portuguese star, and 99 career goals in the Premier League.

Who did it better, Ronaldo… or Ronaldo? 😅💭

Closing in on the division’s ‘100 club’, he could become just the fourth player – after Zlatan Ibrahimovic, Edinson Cavani and Gonzalo Higuain – to score over a century of goals in two of Europe’s top five leagues this century.

The Moroccan missed a glorious chance to win the game for Watford against Brentford this weekend, somehow steering wide of a gaping goal in the final moments at Vicarage Road.

Maxwel Cornet’s woeful penalty for Burnley at West Ham deserves a dishonourable mention, with the Frenchman dragging his spot-kick wide in another costly error for a struggling side.

Whilst Cornet was costing his side at one end of the London Stadium, Nick Pope’s reactions ensured managerless Burnley returned from the capital with a point.

The England international made a stunning save to claw away Kurt Zouma’s downward header, a moment of agility which could prove crucial to the Clarets’ battle to beat the drop.

Nick Pope pulled off a stunning stop in a 1-1 draw against West Ham as Burnley secured a crucial point 👏 pic.twitter.com/WOBqmecosd

Wout Weghorst’s goal earned Burnley a point at West Ham this weekend, as the towering forward rose highest to head home the opening goal of the game.

For a footballer who stands a gigantic 6ft 6in and boasts a fine goalscoring record across his career, it comes as a surprise that his goal against the Hammers was a first headed effort in 35 appearances.

His last headed goal came for Wolfsburg against Stuttgart in April of last season.

1 – Wout Weghorst has scored his first headed league goal in 35 appearances (13 for Burnley, 22 for VfL Wolfsburg), with this his first since netting against VfB Stuttgart in April 2021 for Wolfsburg. Surprised.

Graham Potter purred over the performance of Yves Bissouma this weekend, labelling the midfielder’s showing against Tottenham ‘Champions League level’.

“It is hard when you have a team performance like we did to single anyone out but tactically he was really good. He understood when to cover, release, put pressure on, and then you can see his qualities. His high-end actions are Champions League level. I think you saw the full array of his quality,” Potter said after the game.

It would be little surprise to see a Champions League side take a chance on the Mali international this summer, following another dominant display in the Seagulls’ engine room.

Arsenal are faltering at a crucial time in the season and Mikel Arteta’s failure to address a major weakness in January is looking increasingly costly.

The Gunners lack goal threat in the absence of an a top-quality centre-forward, with Arteta turning to Eddie Nketiah this weekend following a series of sub-standard performances from Alexandre Lacazette.

Arsenal have lost four of their last five league games.

It was a gamble that failed to work as hoped and Arsenal’s failure to sign a striker could cost them Champions League football, after a third consecutive defeat at Southampton this weekend.

Dusan Vlahovic may have preferred a move to Juventus in the winter, but could an alternative option have been sourced after allowing Pierre-Emerick Aubameyang to leave for Barcelona?