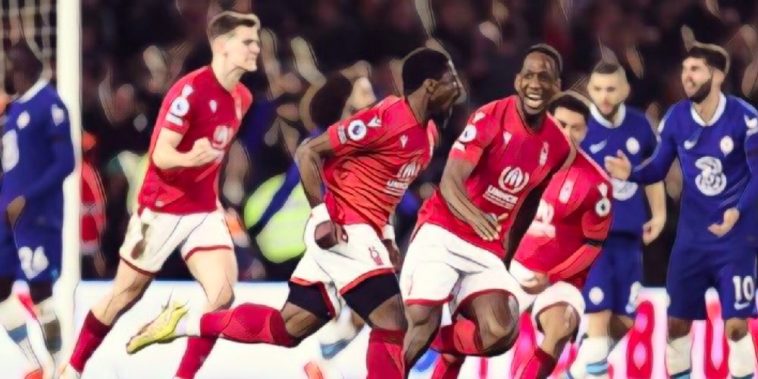 Chelsea’s poor form continued as they dropped points against a much-deserving Nottingham Forest side.

The Blues came into the game with just two wins from their last seven in all competitions, though took the lead in the 16th minute through Raheem Sterling. Willy Boly’s touch from a Christain Pulisic cross looped over Dean Henderson, came back off the bar, and dropped kindly to the England international who volleyed home from close range.

It was however a scrappy and feisty first half with neither side creating too much in terms of clear-cut opportunities.

Forest came out with more attacking intent after the break, and Morgan Gibbs-White went close to leveling the scores as he thundered an effort off the underside of the crossbar.

Then, in the 63rd minute, Forest got a goal that their endeavour and bravery deserved, Chelsea twice failing to clear a corner before the ball dropped to Serge Aurier. The former Spurs right-back kept his composure to control the ball on his chest before firing past Kepa Arrizabalaga from close range.

Chelsea made a number of changes, and while it did allow them to have more control in midfield, they didn’t bring about any kind of discernable improvement in terms of goal threat, with the West London club only managing a single shot in the second half, while Dean Henderson only had one save to make all game.

Speaking after the game, Blues boss Graham Potter admitted his side were ‘below par’, but credited Nottingham Forest for their display

“It was overall below par for us,” he told Match of the Day. “You have to credit Forest, they did what they did well. We didn’t do well enough when we had control. Not easy to create against Forest because they can defend deep and attack spaces well. We can improve that.

“We suffered in the second half so, in the end, it’s a performance we’re not happy with, we have to accept the point but we are disappointed.

“It’s always disappointing to concede how we did, watching the game we weren’t in control at that point anyway. As much as I’m disappointed with the goal that’s not the reason we dropped points, our overall performance wasn’t good. We have to be honest and try to improve.

“The substitutes came on and helped us. [Mateo] Kovacic gave us more control in midfield and Hakim [Ziyech] had some good contributions. Performances from subs was positive, [Conor] Gallagher was unlucky with the chance so there were some things but we’re disappointed.”

The result leaves Chelsea eighth, seven points adrift of fourth-placed Manchester United, and Potter admitted his side have ‘a long way to go’ in the race for Champions League qualification.

“It’s always tough because you have a lot of big teams with lots of top players and coaches. We need to focus on the next match but clearly we have a long way to go.”