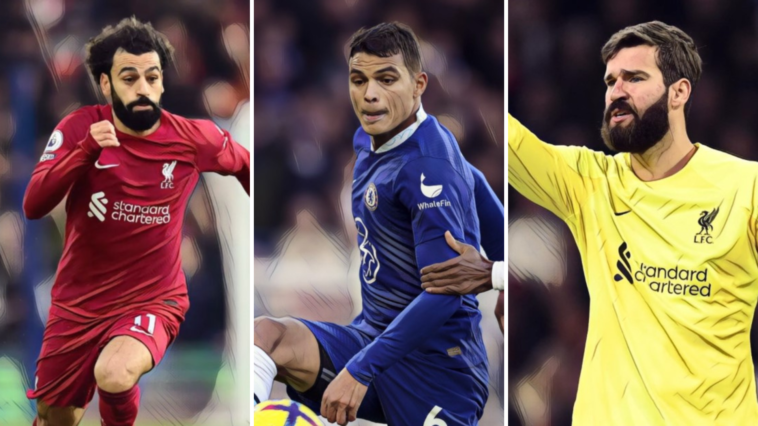 Liverpool and Chelsea meet in the Premier League this weekend with both teams in need of a positive result to salvage stalling seasons.

Jurgen Klopp’s side have began the new year with back-to-back Premier League defeats and are ten points outside the Champions League places, with Chelsea a further place back in tenth after a turbulent start to Graham Potter’s reign at Stamford Bridge.

Ahead of this weekend’s meeting, we’ve picked our Liverpool and Chelsea combined XI. Only players available – or in contention to feature – have been included.

Liverpool’s season has not gone to plan so far, but the Reds would be in an entirely worse predicament had it not been for the performances of Alisson.

Just five teams have presented more clear-cut chances to opposing sides than Jurgen Klopp’s men in terms of xGA (expected goals against), with Alisson having regularly bailed out his backline.

The current form of both squads makes selecting this combined XI difficult and Trent Alexander-Arnold is among the list of names whose levels have dropped this season.

However, Reece James’ absence makes Alexander-Arnold the standout selection at right-back, despite a drop in his productivity this season. The 24-year-old’s career to date has seen Alexander-Arnold win every available major honour, while he ranks third in the Premier League’s all-time charts for assists by defenders.

🗣️ “There’s a level of expectation now, it almost like that saying of being a victim of your own success. People expect us to be immaculate every season.”

Trent Alexander-Arnold on the expectation at Liverpool. 🔴 pic.twitter.com/ncA0LDZSYx

He has provided just one league assist this season, but his underlying numbers indicate he could soon return to his past heights. Only Kevin De Bruyne has played more progressive passes this season, while Alexander-Arnold ranks second among Premier League defenders for through balls, passes into the penalty area, and expected assists, behind Newcastle’s Kieran Trippier.

Ibrahima Konate will be required to step up in the absence of Virgil van Dijk for Liverpool, with the Frenchman a player of real promise.

Konate has proven a good luck charm for Liverpool and it took 18 months before he suffered his first defeat when named in the starting side, that loss coming in the recent collapse at Brentford. Improvement is needed from Jurgen Klopp’s side, but the German has huge faith in Konate to emerge as a long-term leader of the Liverpool backline.

He was the one bright light in an otherwise disastrous performance at Brighton last weekend, before a solid showing helped Liverpool to a clean sheet at Wolves in the FA Cup. Still just 23, he boasts a fine mix of power, poise and potential.

Thiago Silva is still going strong in Chelsea colours, with the veteran centre-back defying time. There were initial doubts when Chelsea agreed the free transfer signing of Silva from Paris Saint-Germain in 2020, but he has proven an inspired addition.

The 38-year-old has been Chelsea’s most consistent defender in a season of struggle at Stamford Bridge to date. A natural leader with a burning will to win, Silva is the sort of character who will ensure standards are maintained in west London.

Even as he approaches his forties, his own have barely dropped. He remains a commanding presence and has made more clearances (74), interceptions (24), blocks (17) and successful passes (1185) than any other Chelsea player in the Premier League this season.

Alisson aside, there is perhaps no Liverpool player who has not suffered as a result of the club’s struggles this season but Robertson remains a vital part of the side.

The Scotland international has provided more assists this season (8) in all competitions than any other Liverpool player, a crucial contribution given the lack of creativity from a maligned midfield.

Robertson’s industry and delivery from wide areas has been a factor in Liverpool’s success in recent seasons, with the 28-year-old recently passing Leighton Baines for the most Premier League assists provided by a defender in the division’s history.

Most Premier League assists provided by defenders in the competition's history.

Robbo is a record-breaker. 👏 pic.twitter.com/b0UtPKYRdx

Ben Chilwell’s absence makes Robertson a straightforward inclusion at left-back, in a combined side created from two squads struggling to live up to expectations.

Midfield has been an area of concern for both clubs this season, with our selection based more on past performances than the dross often served up this season.

Mateo Kovacic has been below his usual standard during the current campaign but remains a midfielder with a unique skillset, one capable of regaining, recycling and progressing the ball with ease.

The Croatian works tirelessly in the engine room and has the craft to cut through opposition lines with driving runs forward, a press-resistant talent who often comes alive when space is minimal. Chelsea will demand more from Kovacic, who is capable of more than he has shown of late.

You’d have to be living under a pretty large rock to have avoided the criticism of Liverpool’s midfield this season, as Jurgen Klopp’s engine room has malfunctioned on more than one occasion.

Thiago has often been a cut above his overwhelmed teammates this season, a brilliant technician with great feet and awareness. The Spaniard has consistently matched his qualities on the ball with a desire to win duels and regain possession, but has too often been let down by a lack of legs around him.

He shone as Liverpool won at Wolves in the FA Cup in midweek, in a new-look midfield three featuring teenager Stefan Bajcetic and Naby Keita.

Klopp could use the same trio against Chelsea this weekend, one which provided his side with an energy that has been lacking this season. Thiago and Keita have won all seven games they have started together at Liverpool, including two semi-finals and a final. That the total is just seven games is an indication of the latter’s struggles for fitness.

Mount is another name in this side enduring a rough patch of form, but is capable of much more than he has shown this season.

Chelsea’s Player of the Season in each of the past two campaigns, the 24-year-old became the first Englishman since Frank Lampard in 2009 to win the club award.

Mount produced the best numbers of his career last season with 11 goals and ten assists in the Premier League. He was one of just three players – alongside Mohamed Salah and Jarrod Bowen – reach 10+ on each metric.

Chelsea will hope Mount can rediscover those levels as the club look to climb the league. Having added Mykhailo Mudryk and Joao Felix to their creative cast, Mount could thrive with increased options around him.

Mohamed Salah is a bona fide Liverpool legend. Since returning to English football following an underwhelming spell at Chelsea, the Egyptian has set record after record tumbling.

Chelsea will come face-to-face with the winger they allowed to leave west London this weekend, in a decision which must still rankle the club’s hierarchy. Salah has had a leading role in Liverpool’s modern success and has scored 173 goals in 282 games – just six players have ever scored more for the club.

The fastest hat-trick in #UCL history 👑

The three-time Premier League Golden Boot winner has 17 in all competitions this season and is the joint-leading scorer in the Champions League. He will be the man Chelsea most fear this weekend.

Both sides are short on firepower this weekend, with Raheem Sterling and Christian Pulisic sidelined for Chelsea, and Diogo Jota, Luis Diaz and Roberto Firmino all absent for Liverpool.

Cody Gakpo earns inclusion in our combined side, despite an underwhelming start to his Liverpool career. The Netherlands international has arrived at a difficult period for the club but confidence is high that he can make an impact after a settling-in period.

He arrived in the winter window as the leading goalscorer and assist provider in the Eredivisie this season, having provided 30 goal involvements in 24 appearances for PSV. Three goals at the 2022 World Cup further demonstrated his capabilities at the highest level.

Mykhailo Mudryk – who could make his debut after an £88m move to Chelsea – will hope to prove he is the most exciting signing of the January transfer window.

Darwin Nunez has had a mixed start at Liverpool, but there have been encouraging signs from the forward this season.

Nunez has scored ten goals in 15 starts across all competitions and has averaged a goal or assist every 109 minutes during his debut campaign at Anfield. While the 23-year-old has found himself a target for criticism due to a wasteful spell around goal, he has the raw attributes to be a major success in the Premier League.

He leads the division for shots and shots on target per 90 minutes this season and has a blend of raw athleticism and power than can unnerve Premier League defences. Liverpool will hope the Uruguayan has recovered from a hamstring complaint in time to face Chelsea.