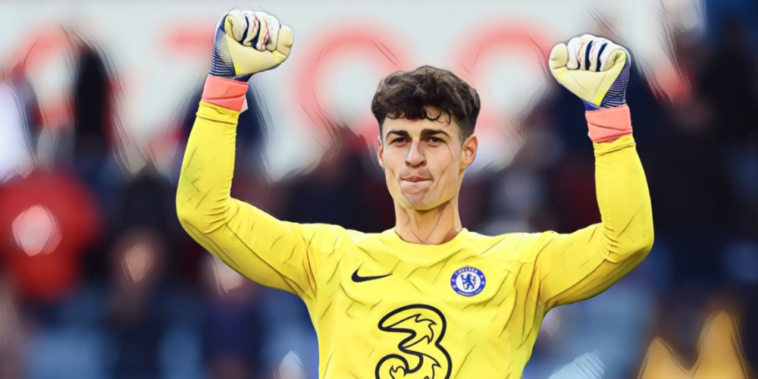 Graham Potter has discussed the battle to be Chelsea’s number one goalkeeper following Kepa Arrizabalaga’s return to form.

Kepa came close to leaving Chelsea during the summer having lost his place as first-choice to Edouard Mendy across the past two seasons, but the Spanish shot-stopper has had a renaissance since Potter’s appointment as head coach.

The 28-year-old has started all six of Potter’s games in charge, with Chelsea unbeaten and on a run of five straight wins – the last four of which have come with clean sheets.

Speaking ahead of Chelsea’s trip to Brentford, Potter discussed the competition at the club to be first-choice goalkeeper.

“Kepa’s form is really pleasing for everybody, especially him, so it’s nice we have competition in that area. That’s how you get players better.”

Kepa produced an outstanding performance during Sunday’s 2-0 win at Aston Villa, as the goalkeeper made a string of superb saves to frustrate the hosts. His seven saves were the most a Chelsea ‘keeper has recorded since the 2017/18 campaign.

3.2 – Despite only playing in three matches, Kepa Arrizabalaga has prevented more goals than any other goalkeeper in the Premier League this season with his saves (3.2).

Having had a turbulent time with the club since his world-record move to Stamford Bridge, the Spain international has found an impressive run of form and Potter has been delighted with his contribution.

“Players want to play and contribute, and Kepa is doing that,” added Potter.

“It’s brilliant for him. It’s a nice example for everybody that somebody it doesn’t go your way, you have to suffer in life sometimes, and things aren’t ideal, but I’ve been really impressed with his character, his personality.

“He’s very professional, understands the game really well, takes responsibility. It’s nice when those types of people get the rewards.”