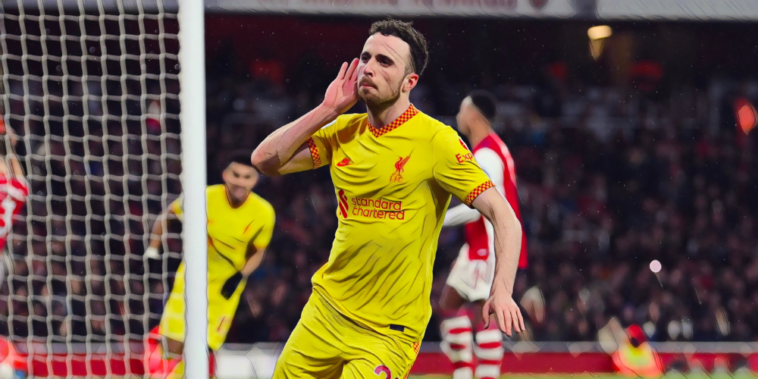 Diogo Jota continued his excellent season for Liverpool with another goal in the club’s 2-0 win over Arsenal in midweek, a result which moved the Reds within one point of the Premier League leaders.

Jota has proven a fine addition to Jurgen Klopp’s ranks since arriving from Wolves in 2020 and the current campaign has been the best of his career to date.

The 25-year-old is one of several talents from Portugal flourishing across Europe’s major leagues this season and we’ve decided to rank the most prolific Portuguese players on the continent in 2021/22.

Bruno Fernandes has been a favourite with football fans who like to live bet due to him being a regular source of goals for Manchester United since his arrival from Sporting Lisbon. The Portugal international has even broken Frank Lampard’s Premier League record for goals from a midfielder in a single season.

The midfielder scored 28 in all competitions in 2021/22, one more than Lampard managed during Chelsea’s double-winning season of 2009/10.

Fernandes scored a hat-trick on the opening day of the current campaign against Leeds and has nine in all competitions this season, with each of his goals having come in the Premier League.

The 27-year-old has taken on a more creative role since the arrival of compatriot Cristiano Ronaldo and has also registered 14 assists, including seven in the Champions League alone.

Pep Guardiola has been gushing in his praise for Bernardo Silva this season with the midfielder having been back to his best after a mixed period at Manchester City.

Silva has been arguably the Player of the Season for the Premier League champions, influencing games from a number of roles both in midfield and further forward.

His seven league goals have already matched his best-ever haul in a Premier League campaign and he has 10 in all competitions, three short of the total he managed during a sublime 2018/19 season.

Rafael Leão is among the next wave of exciting attacking talent from Portugal with the forward having continued his rise in the colours of AC Milan this season.

Leão has scored a career-best eight league goals for the Rossoneri and 11 in all competitions, with his performances – operating from the left of the Milan forward line – having reportedly attracted interest from the likes of Arsenal, Tottenham and PSG.

Leão made his senior debut for Portugal during October’s international break and provided an assist for André Silva on his first appearance, an immediate impact he will hope can earn him a regular role with the Seleção.

Valencia have fallen on harder times in recent seasons, but Gonçalo Guedes has been a bright spark among much mediocrity at the Mestalla this season.

Valencia’s leading scorer in La Liga this season with 10 goals, just five players have been directly involved in more La Liga goals than the versatile forward who has also registered a team-leading five assists.

Guedes has endured a frustrating period since a promising first season in Spain, but has developed into a decisive player this term and scored the crucial winner as Valencia beat Athletic Bilbao in the Copa Del Rey semi-finals earlier this month.

Valencia will face Real Betis in the final next month and win could be the club’s best chance of a route into Europe for next season.

Silva’s 28 league goals last season were bettered by only Robert Lewandowski and he has enjoyed a solid start in his new surroundings, netting 15 goals across all competitions.

Andre Silva has now scored 10+ goals in each of his three seasons in the Bundesliga:

The 26-year-old scored just twice in his first 12 league appearances for Leipzig but has found his groove across the second period of the season, scoring eight goals from 14 games since late November.

He has scored four goals in Champions League and Europa League competition this season, including netting as Leipzig eliminated Real Sociedad from the latter tournament last month.

Cristiano Ronaldo has been Portuguese football’s leading scorer for more than decade, scoring more than 30 goals in all competitions in 11 of the past 12 seasons.

Ronaldo’s return to Manchester United last summer was major headline news and there has been continued debate over his role with the Red Devils, but a haul of 18 goals is an impressive total and proof he remains an elite goalscorer.

The 37-year-old’s goals have also proved more decisive than any other player in Europe’s top five leagues, having scored the winning goal in nine fixtures for United this season.

Jota’s goal in Liverpool’s 2-0 win over Arsenal saw him move to 18 for the season in all competitions, matching Ronaldo as the most prolific Portuguese player of 2021/22 to date.

Jota has built on an impressive first season at Liverpool to produce an even better campaign, his 18 goals equalling the career-best haul he managed whilst playing for Wolves in England’s second tier.

What a moment to put us ahead! ⚽ pic.twitter.com/kzqfdXUGiP

Comfortable in all three positions across the forward line and bringing the intensity Jurgen Klopp demands from his front three, he has become a key component of a Liverpool side competing on multiple fronts this season.

Mohamed Salah is the only player in the Premier League to have scored more goals than Jota this season, with the 25-year-old having averaged a goal every 154 minutes in league and European action in 2021/22.