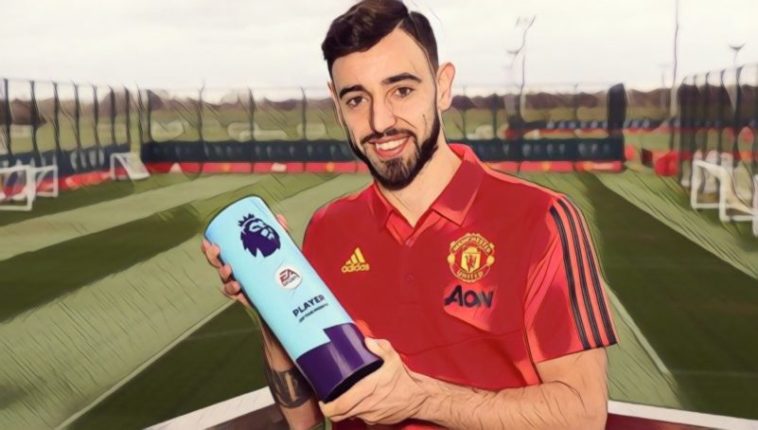 Manchester United’s mid-season capture of Bruno Fernandes has delighted the club’s supporters, the midfielder making an instant impact in his new surroundings to quickly become a fans’ favourite.

The Portuguese international’s impressive performances since arriving at Old Trafford saw him named as the top-flights Player of the Month for February, becoming just the ninth player to win the award during their first month in the Premier League.

We’ve decided to look back and analyse each of the players to achieve the feat, here are our ratings of every player to win the Premier League’s Player of the Month in their first month in the division:

Klinsmann’s time in the Premier League was brief but brilliant, establishing himself as a firm fans’ favourite following a prolific season at Tottenham that saw him claim the FWA Footballer of the Year award.

The Germany international arrived in English football as a hate-figure following his notorious diving antics – notably an theatrical incident that saw Argentina’s Pablo Monzón sent off in the 1990 World Cup final – and received a less than warm welcome upon his first appearance in the Premier League.

Klinsmann marked his Spurs debut with a goal during a thrilling win at Sheffield Wednesday, celebrating the goal with a brilliant self-depreciative dive which instantly helped warm the dubious English public.

The forward scored a further four goals before the end of August to be named as the first ever Premier League Player of the Month, finishing the season with 30 in all competitions and completing an incredible turnaround in public opinion and popularity.

Newcastle fans headed into the 1995/96 season with ambitions of challenging for the title after an impressive couple of seasons in the Premier League under Kevin Keegan, their hopes further raised with the exciting capture of David Ginola from Paris Saint-Germain.

The fleet-footed star quickly impressed in his new surroundings on Tyneside, playing an influential role as the Magpies began the new campaign with four successive wins and opening his account for the club with a goal at Sheffield Wednesday.

Despite racing into a 12-point lead at the summit Newcastle’s great entertainers were famously overhauled by Manchester United and finished as runners-up, before again finishing second the following year.

Ginola later departed after just two seasons at St James’ Park, joining Tottenham in a £2.5m deal in 1997 and winning a PFA Player of the Year and FWA Footballer of the Year during his time in north London.

Berger had starred for the Czech Republic during that summer’s European Championships on home soil, attracting the interest of Liverpool who signed the midfielder in a £3m deal from Borussia Dortmund.

The summer signing did not feature during the club’s opening four fixtures of the season before making his debut as a substitute against Southampton and quickly making an impression throughout September.

Berger scored twice on his first start against Leicester, before hitting another brace in a memorable 5-1 victory over Chelsea at Anfield as the Merseyside club opened the season with an eight-game unbeaten run.

The Czech winger spent seven seasons at the Reds and won the FA Cup and UEFA Cup amongst his honours, though his time was largely plagued by injuries despite occasional flashes of his undoubted quality.

He later spent time at Portsmouth, Aston Villa and Stoke before retiring in 2010.

The forward’s impressive emergence at Wolves attracted the interest of Midlands rivals Coventry, the Sky Blues securing the signing of a young Keane in a £6m deal ahead of the 1999/2000 season.

Keane scored twice on his debut against Derby County before adding another goal in a draw at Sunderland, his quick-fire start to life at Highfield Road seeing the Irishman named as the Premier League’s Player of the Month.

That campaign proved to be Keane’s only as a Coventry player, however, leaving at the end of the season for Inter Milan before later returning to the Premier League, scoring 126 top-flight goals and becoming Ireland’s all-time record goalscorer.

Jose Mourinho’s second spell as Chelsea manager saw a pivotal summer of strengthening in 2014, handing an opportunity to returning loanee Thibaut Courtois in goal in addition to the marquee signings of Cesc Fabregas and Diego Costa.

Each of the trio impressed for the west London side but it was the latter who truly starred, scoring four times in three fixtures as Mourinho’s side got off to a perfect start with successive wins over Burnley, Leicester and Everton.

Named as the Premier League’s Player of the Month for August, Costa scored 21 goals in all competitions as the Blues won a Premier League and League Cup double, before adding a second league title under Antonio Conte two seasons later.

The bullish forward scored 52 Premier League goals in just 89 appearances over a memorable three-year spell, the Spaniard rightfully regarded as one of the club’s finest strikers of the modern era.

Swansea’s capture of Ayew from Marseille was seen as a coup following his arrival at the Liberty Stadium, the Ghana international arriving on a free transfer and tipped as one of the bargains of the season.

Those predictions seemed accurate following a blistering start to his career in South Wales, scoring three times in his first four appearances including a debut goal against Chelsea and the equaliser in a home win over Manchester United.

Ayew was named as Player of the Month and finished the season with 12 league goals, joining West Ham the following season in a club-record deal but endured a disappointing two season spell with the Hammers.

The forward rejoined Swansea in January 2018 before spending a season on-loan at Fenerbahce following the Swans’ relegation, returning to the club last summer and making 35 appearances in the Championship so far this season.

Martial announced himself to English football in stunning style following his big-money move from Monaco, scoring a sensational solo goal against Liverpool to instantly win the hearts of the Old Trafford faithful.

The exciting teenager continued that impressive introduction with a brace against Southampton to be named as the division’s Player of the Month – his immediate impact making a mockery of those who sneered at his lavish price-tage.

Since then Martial has scored 64 goals in 208 appearances in all competitions for the Red Devils, though he is perhaps yet to hit the heights once expected following his first performances in Manchester United colours.

One of two players this season – alongside the aforementioned Fernandes – to win the honour during their first month in the division, Pukki began the campaign in prolific fashion for newly-promoted Norwich.

After netting a consolation in the opening day defeat at Liverpool, the Finnish forward scored a hat-trick in the victory over Newcastle at Carrow Road before making it five goals in just three appearances against Chelsea.

Having been named as the Championship Player of the Season, Pukki began life in the top flight with the first Player of the Month award of the season in August – stepping up seamlessly into the Premier League.

Norwich have since struggled at the foot of the division, however, though Pukki has added a further six goals to his tally to keep their faint hopes of survival alive.

The latest addition to this list is Manchester United midfielder Fernandes, the midfielder having quickly established himself as arguably the key figure in Ole Gunnar Solskjaer’s side.

The former Sporting Lisbon captain has starred since his mid-season arrival from the Portuguese capital, his influence coinciding with an upturn in form for the Red Devils who have long lacked creativity at the heart of their midfield.

Fernandes has scored twice and provided a further three assists in five appearances, and his rating could rise significantly higher if he can maintain his initial level of performance in the seasons to come.