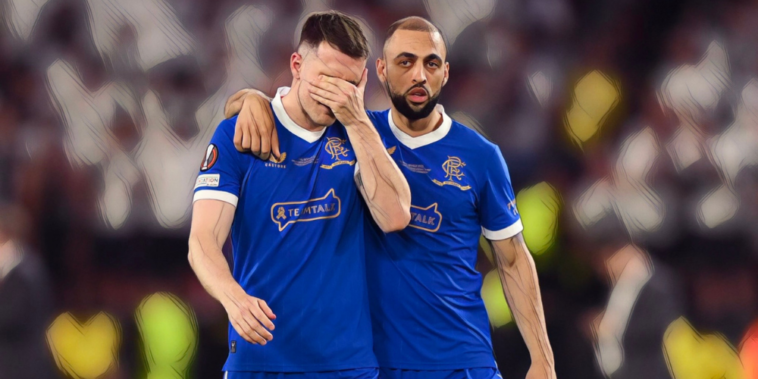 Aaron Ramsey was the villain of Rangers’ Europa League final defeat on Wednesday evening, as the midfielder missed the decisive spot-kick in the Scottish side’s shootout defeat to Eintracht Frankfurt.

Ramsey’s late introduction and subsequent miss has again raised questions over the merits of bringing on players cold – regardless of penalty experience and talent – in crucial moments.

England’s ‘Golden Generation’ flattered to deceive at major tournaments, with back-to-back penalty shootout losses to Portugal ending their hopes at Euro 2004 and the 2006 World Cup.

The latter of those losses saw Jamie Carragher introduced in the final stages of extra-time, coming on for fellow substitute Aaron Lennon with the sole purpose of taking a spot-kick.

Carragher appeared a strange selection given his lack of experience in taking penalties but dispatched his initial kick, though was forced into a re-take after referee Horacio Marcelo Elizondo claimed he had taken the kick too soon.

The defender’s second effort was saved as England exited the World Cup and Carragher admitted his ‘head was all over the place’ after being ordered to step up a second time.

“No one mentioned before the game that it could happen [come on to take a pen]. I’d score every penalty in training,” he told Gary Neville’s The Overlap.

“I didn’t miss one in all the weeks we were there. I didn’t feel nervous one bit. I wouldn’t say the manager was wrong. It wasn’t ideal circumstances.

“I turned around and didn’t wait for the ref to blow the whistle. I wanted to go up with pace, I scored and referee said take it again. And then my head was all over the place. I don’t look back at that now about missing a penalty for England. I don’t think people could believe I was taking a f****** penalty!”

Gareth Southgate made the bold decision to substitute Marcus Rashford and Jadon Sancho into the Euro 2020 final in the closing seconds of extra-time, with both coming in cold ahead of a high-pressure shootout at Wembley.

Rashford’s introduction came given his experience from the spot, with only Harry Kane having scored more penalties than the Manchester United forward among the Three Lions’ squad.

Both Rashford and Sancho – alongside Bukayo Saka – missed for England, extending the nation’s wait for major tournament success.

Southgate admitted in the aftermath that the decision to bring on Rashford and Sancho with limited time to get into the game was a ‘gamble’ that had backfired for his side.

Late substitutes ahead of shootouts are common, but West Ham’s decision to introduce Mark Noble to take a late Premier League penalty against Manchester United raised more than a few eyebrows.

Trailing 2-1 at the London Stadium in September 2021, the Hammers were awarded a 95th-minute spot-kick after Luke Shaw’s handball inside the area.

David Moyes looked to his bench and waved for Noble to come on, the veteran midfielder having not missed a Premier League penalty for almost five years – a run of 10 successful spot-kicks.

Noble’s one and only touch of the game was the tame penalty beaten away by David de Gea, with the referee’s full-time whistle following soon after as West Ham crashed to defeat.

It’s fair to say Kepa Arrizabalaga was not brought on in the 2022 League Cup final for his penalty-taking expertise, but Thomas Tuchel’s goalkeeping swap came back to haunt him as Chelsea crashed to a shootout defeat to Liverpool at Wembley.

The Spaniard had starred as Chelsea won the UEFA Super Cup on penalties against Villarreal in August, coming on for the shootout before making saves from Aissa Mandi and Raul Albiol.

Tuchel made the same decision to swap out first-choice shot-stopper Edouard Mendy for Kepa with penalties looming against Liverpool, though this time with far less success.

Kepa Arrizabalaga misses the 22nd penalty after being subbed on for the shoot-out! 😨 pic.twitter.com/yLIOIQWdUD

A marathon shootout saw Kepa fail to save any of Liverpool’s successful 11 penalties, before missing the crucial kick with a wild effort blazed over the bar as the Blues were beaten.

Ramsey’s arrival on-loan from Juventus was viewed as a huge coup for Rangers, but a disappointing season for the midfielder ended with just three minutes as an extra-time substitute in the Europa League final loss to Eintracht Frankfurt.

The Wales international was trusted late on to hold his nerve in the shootout, but joined an increasing list of players to have fluffed their lines after late introductions into big games.

Aaron Ramsey was subbed on three minutes before the shootout.

His miss led to Rangers missing out on the Europa League trophy 💔 pic.twitter.com/NcdIibc4Fj

Giovanni van Bronckhorst’s decision was another which backfired as Ramsey missed his pressure penalty and Rangers’ first European final in 50 years ended in agonising fashion in Seville.