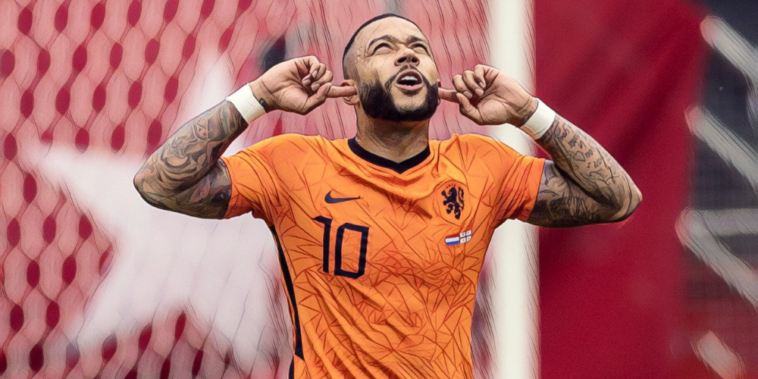 Major tournaments always provide players with an opportunity to impress potential suitors, a four-week window in which performances are scrutinised by the watching world.

History may tell us that post-tournament signings do not always prove inspired, but Euro 2020 nonetheless promises to provide a platform for several stars linked with summer moves.

Here are six players who will be in the shop window at Euro 2020.

Memphis Depay shapes as one of the most interesting free agency options in the 2020 pool of talent, with the Netherland international having announced his decision to leave Lyon at the expiry of his contract next month.

The Dutch forward has bounced back from a difficult spell at Manchester United to rebuild his reputation in France, scoring 76 goals in just 178 appearances across five seasons with Lyon.

The 27-year-old finished as runner-up to Kylian Mbappe as the division’s leading scorer in 2020/21 and will head into this summer’s European Championship with the hopes of the Netherlands upon his shoulders.

Depay has developed into a talismanic figure for the Oranje and was outstanding during their qualification campaign, scoring six goals and providing eight assists operating largely in a false nine position.

The forward has scored seven goals in his past seven appearances at international level, with a further three assists, and has been strongly linked with a move to Barcelona this summer.

The Spanish giants had reportedly been keen to conclude a deal before this summer’s tournament, though with the Netherlands beginning their campaign on June 13 it appears unlikely a transfer will be completed in that timeframe.

Inter Milan and Tottenham have emerged as potential rivals to Barcelona’s chase for Depay, whose list of suitors could grow should he enjoy a strong tournament.

Having seen fellow Dutch international Georginio Wijnaldum opt instead for Paris Saint-Germain, Barcelona will be wary of being gazumped once again.

Another notable name available for nothing this summer, AC Milan have reportedly not given up hope of securing a contract extension for Hakan Calhanoglu even if time is rapidly running out.

Calhanoglu has entered the final weeks of his deal with the Rossoneri and has attracted interest from across Europe, with both Manchester United and Arsenal credited as suitors for 27-year-old.

The Turkey international has enjoyed a fine season for Milan, providing a team-high of nine league assists and leading Serie A for key passes and shot-creating actions in 2020/21.

Calhanoglu will form part of a Turkey side considered by many as ‘dark horses’ at Euro 2020, the tournaments most youthful side possessing a number of exciting talents and a favourable draw.

Calhanoglu will be tasked with making the Turks tick in an advanced central role, with his creative quality a major weapon in the nation’s arsenal as he bids to provide ammunition to a forward line including Lille stars Yusuf Yazici and Burak Yilmaz.

Capable of defence-splitting passes, he will be one to watch this summer with several clubs set to keep a close eye on his contract situation.

Changes are expected at Liverpool this summer following a challenging season for Jurgen Klopp’s team, the heights of their 2019/20 campaign followed by a testing campaign and third-placed Premier League finish.

Sales are anticipated as the Reds seek to raise funds for their summer recruitment, with Divock Origi, Harry Wilson, Marko Grujic and Xherdan Shaqiri amongst those linked with Anfield exits.

Shaqiri has spent the past three seasons on Merseyside and has struggled for regular opportunities, starting just seven league fixtures across the past two campaigns and scoring twice in all competitions.

The 29-year-old remains a key figure for Switzerland however, and will head to Euro 2020 amongst his side’s most important players having scored 23 goals in 91 caps at international level.

Shaqiri’s technical ability can provide match-winning moments and the winger is sure to attract interest this summer, recent reports having suggested he would be available for a fee of just £12m.

Lazio, Roma, Celtic and Sevilla have been linked, whilst several Premier League sides could be tempted for a player with experience, quality and a penchant for the spectacular.

Robin Quaison has been repeatedly linked with a move to the Premier League in recent years, Tottenham, Burnley and Southampton amongst those to have monitored the Mainz forward.

Quaison has spent the past five seasons in the Bundesliga and enjoyed the best campaign of his career during the 2019/20 season, scoring 13 league goals, before netting six in a struggling side last season.

The 27-year-old is comfortable on either flank or in a central role and will form part of Sweden’s squad at Euro 2020, having finished as the nation’s leading scorer during qualification for the tournament with five goals.

Free agents have never been in more demand given the current financial climate and as Quaison approaches the end of his deal in Germany he is unlikely to be short of suitors.

Quaison’s athleticism and versatility could make him a shrewd signing for top-flight sides in need of attacking options this summer, with the star set to play a prominent role in Sweden’s bid to progress from a group containing Spain, Slovakia and Poland.

Ozan Kabak spent the second half of last season on loan at Liverpool after arriving as part of a deadline day double signing, the Reds in desperate need of centre-back reinforcements following an injury crisis at Anfield.

The 21-year-old endured a shaky start before improving as he adjusted to the Premier League, though Liverpool chose not to exercise the £18m option to sign the Turkey international on a permanent basis.

Schalke’s relegation and financial concerns mean that Kabak is available for sale this summer however, with both Newcastle and Leicester linked with moves to sign the youngster.

Leicester are in the market for a centre-back following the retirement of Wes Morgan and a move to the King Power Stadium would see Kabak join international colleague Caglar Soyuncu, who he will hope to partner at Euro 2020.

Kabak has said he would like to continue his career in either the Premier League or Bundesliga and strong performances this summer could see offers arrive for the Schalke centre-back.

Pau Torres’ long list of admirers is reported to include Real Madrid, Barcelona and both Manchester clubs, with the defenders release clause of around £43m only adding to his appeal.

Torres has impressed since coming through the ranks at Villarreal, forming part of the side that won the Europa League in 2020/21 and establishing himself as a senior international with Spain.

Spain head into Euro 2020 with an emerging team containing several new faces and the nine-cap centre-back is set to play a prominent role, with long-serving captain Sergio Ramos amongst the high-profile omissions from Luis Enrique’s plans.

Torres looks set to partner Aymeric Laporte – who recently changed his international allegiance from France to Spain – at the heart of the defence and it is a partnership that combines determined defending with the continental class to play confidently from the back.

The 24-year-old oozes confidence and calm in defence and looks ready-made for the step up to one of Europe’s elite, this summer’s European Championship providing a chance for Torres to demonstrate he belongs at the very highest level.