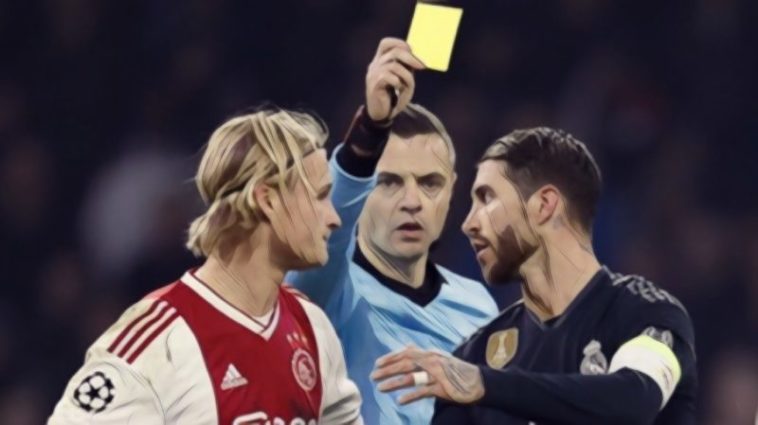 Yellow cards have been a vital part of modern football since their introduction at the 1970 World Cup half a century ago, with some players becoming all too familiar with the referee’s notebook.

Cynical challenges, dissent and over-exuberant celebrations are just some of the reasons players can be cautioned, and we’ve decided to look at some of Europe’s most prolific card receivers of modern times.

Here are the five players with the most yellow cards in Champions League history:

The most decorated player in football history, Alves’ career in European football saw him become arguably the finest full-back of his generation, collecting a wealth of major honours at super-clubs including Barcelona, Juventus and Paris Saint-Germain.

It would be at the former where he would truly thrive, however, winning six domestic league titles and the Champions League on three occasions, and he would become a familiar name to both opposition sides and European referees.

Alves would be cautioned on 27 occasions throughout his 111 Champions League appearances, including in Barcelona’s 2011 final victory over Manchester United at Wembley.

Gennaro Gattuso is a name few will be surprised to see feature highly on this list, the former Italy international a snarling presence in the midfield of an AC Milan side that would twice conquer Europe under Carlo Ancelotti.

The ferociously competitive and fiery Gattuso would bring the bite to a Milan midfield partnership alongside the artistry of Andrea Pirlo, relentlessly harrying opposition and never one to shirk a challenge.

⚽️ Gennaro Gattuso scored his first and only @ChampionsLeague goal for #ACMilan in a 4-1 win over Sparta Praha at San Siro.

His combative edge would see him become no stranger to referees throughout an illustrious Champions League career, however, picking up a prolific 28 yellow cards in 76 games on Europe’s biggest stage.

He was surprisingly sent off just once in Champions League action – against Ajax in 2003 – though did receive a four-match ban for head-butting Tottenham assistant Joe Jordan as tempers flared at full-time following a clash between Milan and the north London side in 2011.

One of the greatest midfielders of modern times, Alonso would twice lift the Champions League during spells at European football royalty including Liverpool, Real Madrid and Bayern Munich.

The Spaniard was not renowned as a particularly tough tackler or a player who regularly picked up bookings, but his lengthy career at the top level saw him cautioned on 31 occasions in the Champions League – the third-highest of any player in the competition’s history.

Yellow cards are often largely insignificant moments but two in Alonso’s Champions League career stick out vividly in the memory. The midfielder – alongside teammate Sergio Ramos – instructed by the ever sneaky Jose Mourinho to pick up second bookings for time-wasting against Ajax in 2010, thus missing their dead-rubber final group stage game and ensuring a clean slate for the knock-out stages.

Mourinho’s masterplan may have resulted in fines for his players as UEFA found the club guilty of breaching competition rules, though the decision would stand as Alonso and Ramos sat out their next fixture against Auxerre.

The second memorable Alonso booking would come in the 2014 semi-finals, the competition’s former three-booking ruling seeing the midfielder miss out of Real Madrid’s La Decima final success over Atletico Madrid.

Ask any midfielder who played alongside or against the former Manchester United maestro and they will no doubt lavish praise upon the skillset of a player many regarded amongst the finest of his generation.

Scholes would twice lift the Champions League under Sir Alex Ferguson and could seemingly do it all except for tackle, or so the myth would have you believe.

In truth, for all his technical genius and ability to ping cross-field passes with unwavering precision, Scholes had more than a streak of competitive edge.

The midfielder admitted late in his career that retribution was often at the forefront of his challenges had he been previously fouled, which on reflection was often evident as he hacked away at opponents with no apparent concept of timing.

Scholes would accumulate 32 yellow cards throughout his Champions League career, none more costly than the one that would see him suspended for United’s 1999 final success.

Did you really expect it to be anyone else?

The Real Madrid defender collects cards as if it were going out of fashion, holding a series of disciplinary records including being the most booked player in the history of the Champions League.

Ramos has averaged a yellow card every 3.2 matches throughout a Champions League career that has delivered four titles, the Spaniard memorably scoring in final successes over Atletico Madrid in 2014 and 2016.

The 33-year-old has previously found himself in hot water for picking up tactical bookings to avoid potential future suspensions, including during last season’s last-16 clash with Ajax – a tactic that backfired in memorable style as the Dutch side dumped holders Madrid out of the competition in the absence of their captain.

Ramos is also the most sent-off player in Champions League history, his four dismissals a joint-record alongside Edgar Davids and Zlatan Ibrahimovic.